The American College of Obstetricians and Gynecologists (ACOG) has released its guide for language on abortion. In it, the organization claims that the term “late-term abortion” has “no clinical or medical significance.” However, the phrase “late-term abortion” has been used by the abortion industry and media alike for decades to define abortions committed later in pregnancy. The changing of the ACOG’s terminology has historically been beneficial to the abortion industry — and this change is no different.

The ACOG, whose pro-abortion stance was led by population control enthusiasts, has come to the defense of abortion for years. Back in the 1960s, the organization chose to redefine the term “conception” — the word long-understood to mean the creation of a new, unique human life beginning at fertilization — to implantation — the point at which a new human life implants in the uterine wall. This was done to accommodate a pro-abortion, pro-contraception agenda.

Now, ACOG has set its sights on “late-term abortion,” claiming, “This phrase has no clinical or medical significance.”

Instead, “Term,” says ACOG, has “historically referred to the 3 weeks before and 2 weeks after a pregnancy’s due date.” 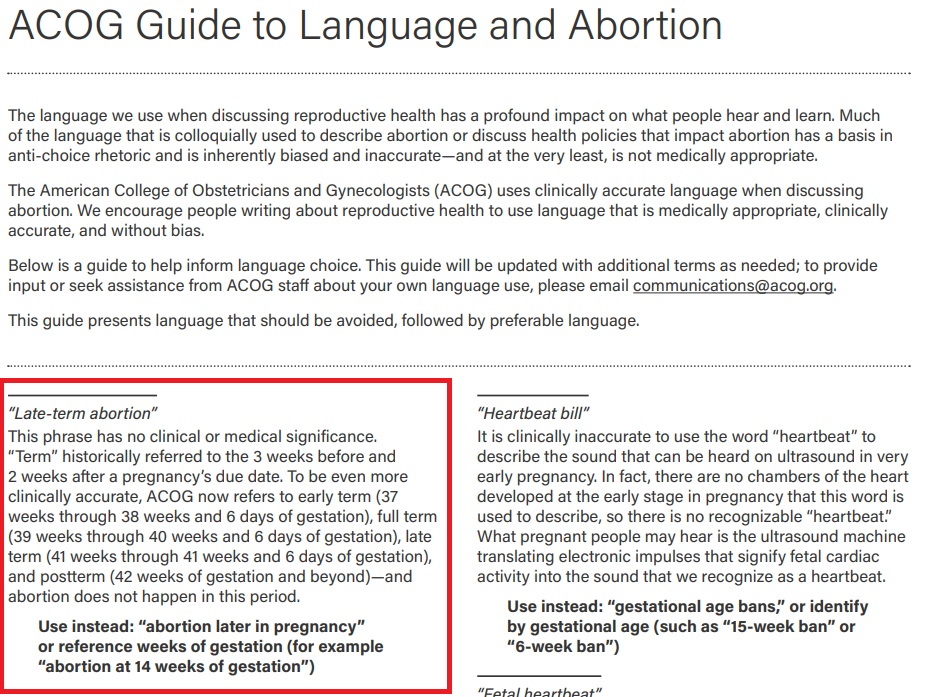 ACOG Guide to language and abortion

“Technically, a term delivery is one that occurs between 37 and 42 weeks gestation with the due date occurring at 40 weeks. It is perfectly normal for a pregnancy to go up to two weeks past the due date,” Dr. Skop claimed. Therefore, ACOG is defining “late-term” narrowly as only those abortions that could happen at 41 to 42 weeks gestation.

“ACOG is using a very limited definition of ‘late-term’ to fool the public into thinking abortions don’t happen later in pregnancy. They know full well when a layman uses ‘late-term abortion’ they are referring to a later abortion but not necessarily one from 41 to 42 weeks,” Dr. Skop told Live Action News. “Just because ACOG does not know of a case of abortion occurring 41 to 42 weeks, doesn’t mean the law would prohibit one. In fact, ACOG has never supported a restriction that would prevent such an abortion.”

Dr. Skop added, “What everybody knows intuitively is that late term [abortion] is referring to abortion later in the pregnancy. It’s just ACOG obscuring the meaning of terms.”

Today, babies are tragically aborted at all stages of development — even mere days prior to birth, as evidenced by a recent report from Kentucky’s Department for Public Health, Office of Vital Statistics.

According to ACOG’s new guide, abortions between 37 and 38 weeks will now technically be called “early term” and should be recorded as such. This will obscure from the public how many abortions are actually occurring late in pregnancy. 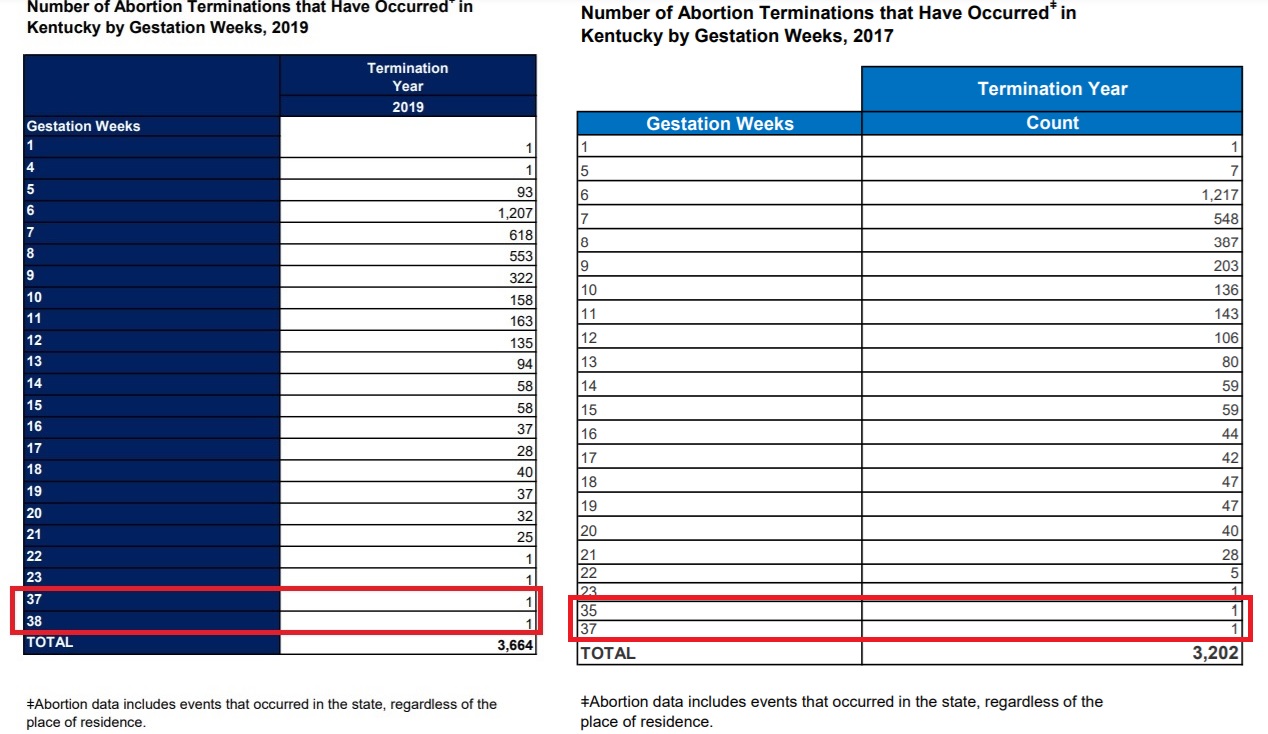 In 2018, the clinical estimated fetal ages of babies aborted (up to birth) in Minnesota were as follows: two at 31 weeks, one at 36 weeks and one at 39 weeks gestation. Tragically, Minnesota‘s 2020 abortion report also recorded one abortion committed at 35 weeks gestation.

Apparently, the abortion committed at 39 weeks is to now be properly defined as a “full term” abortion, according to ACOG standards. 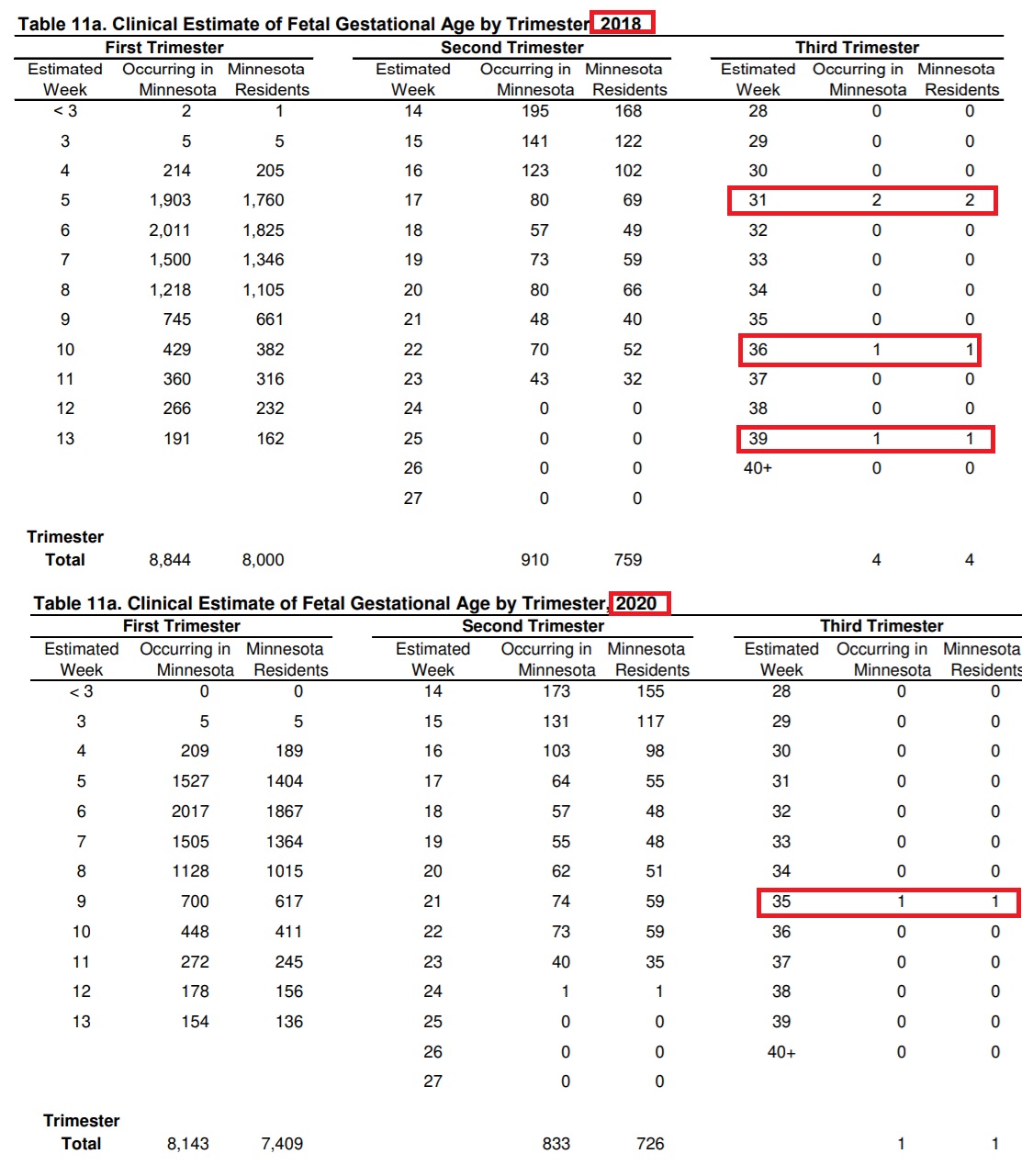 Nowhere in ACOG’s guide or website does the organization call for stricter federal requirements for reporting of abortion by gestational weeks, especially those deemed later in pregnancy.

Abortion industry insiders like ACOG present abortion to the public as if later abortions either rarely ever happen or take place solely for reasons of “health.” ACOG has promulgated this deception for decades, even after it was exposed for its lies in the 1990s during the debate over so-called “partial-birth abortion” when abortion leader Ron Fitzsimmons admitted 3,000-4,000 “partial birth abortions” took place each year. 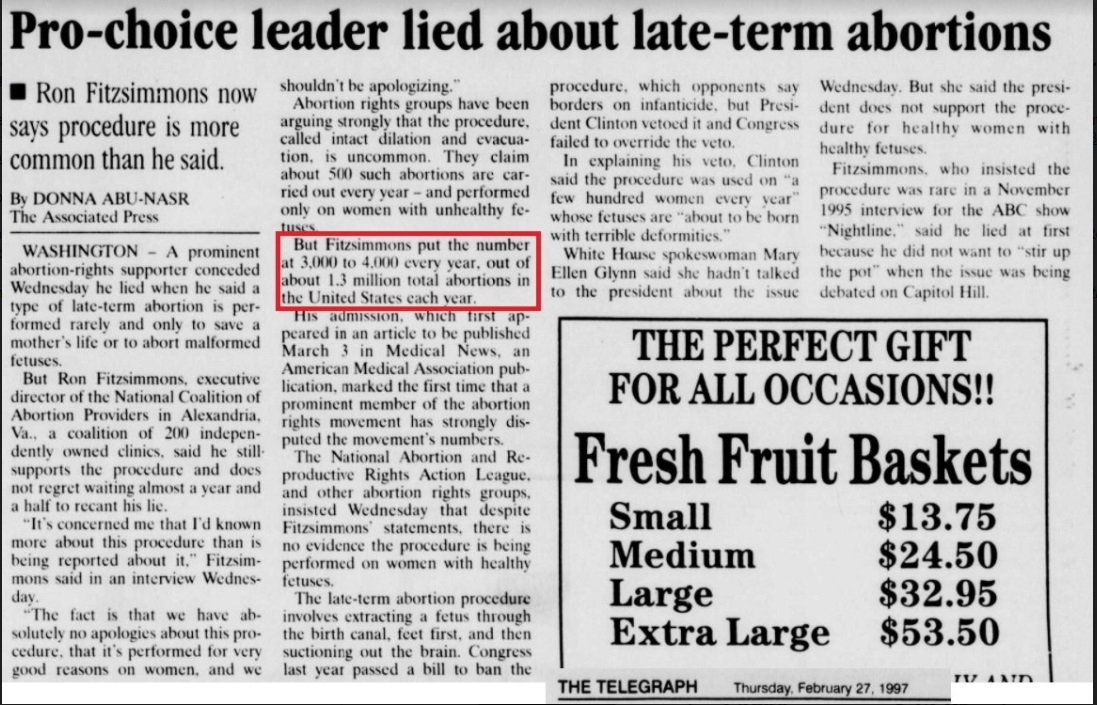 In 1995, Congress passed a partial-birth abortion ban which was vetoed by President Bill Clinton in 1996. Then, in March 1997, during another Congressional hearing on the topic, Senator Orrin Hatch played a PBS news show, “Partial Truth,” which examined media bias surrounding late term abortions. (Read statements from journalists regarding the lies and distortions here.)

“ACOG opposes restrictions on partial-birth abortion — a barbaric procedure in which the doctor delivers a portion of the baby outside the mother’s body and then kills the child by crushing his skull or suctioning his brain,” Dr. Skop and Mary Scoch wrote in a recent Newsweek op-ed. “It usually takes place in the second or third trimester of pregnancy. The laws of 21 states and the nation’s capital — and ACOG’s own support for procedures aborting babies ‘later in pregnancy’ — allow abortion to be performed at any time before delivery.”

ACOG is about abortion advocacy

While ACOG quibbles over terminology, it has been estimated that 100,000 unique human beings are killed in second and third trimester abortions each year — nearly 274 babies each day and at least 11 every hour. Recently, the pro-abortion Guttmacher Institute estimated that nationally, between 54,000 and 63,000 abortions take place annually at or after 15 weeks. The vast majority are done by D&E, an abortion method that involves the direct dismemberment of a child in the womb.

Laws to require medical intervention for infants born alive after an abortion attempt are often ignored by ACOG. In addition, ACOG has seemingly remained silent over legislation in Colorado, which legal experts believe contains language that would allow children outside the womb to be legally left to die if they survive an abortion attempt. When a bill was recently introduced in Maryland that other legal experts have said could decriminalize infanticide up to 28 days after birth, there was crickets in response from ACOG.

ACOG’s position is abortion advocacy at the expense of the lives of the second of the two patients every OB-GYN is sworn to protect. This is evidenced by a recently archived committee opinion to promote increasing abortion, which was formerly published on ACOG’s website. It clearly shows the organization is willing to “oppose and overturn restrictions” and “mainstream abortion as an integral component of women’s health care.”