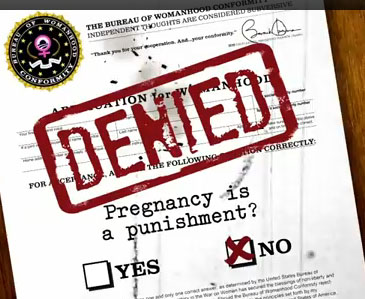 Are you a female? Are you pro-life? Congratulations: you are no longer a “real” woman. 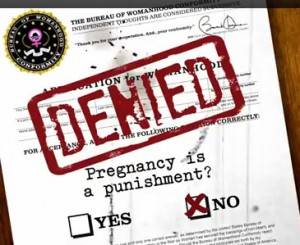 Are you a female? Are you pro-life? Congratulations: you are no longer a “real” woman.

Or so the feminists tell us. Lately, being “anti-abortion” is synonymous with being “anti-woman.” How is this absurd connection made? Let’s follow the argumentation of the oh-so-logical left…

Assertion #1: Abortion is empowering to women (and should be legal in all forms).

Let’s strip this statement of its deceptive shroud and force the true meaning to come to light. Choosing to murder her child makes a woman feel powerful. Allow the morbid nature of this statement to sink in. Power is gained through bloodshed. Of course, this ideology does not apply to infants outside the womb – those children are protected by law. It is their hidden counterparts in the womb that are undefended. America has transformed abortion from a “necessary evil” to a “positive good.” Hard to believe that women actually find delight in abortion? A quick search of pro-abortion blogs reveals women boasting, “Abortion is awesome!” and “I love abortion!” Our nation no longer merely accepts abortion; we applaud it.

Assertion #2: When abortion access is restricted, women are stripped of their dignity (and “die on the floor”).

This argument is equally disturbing. A woman’s dignity is no longer found in her nurturing love for her children; it rests in her ability to kill her children. This nauseating statement should send chills up your spine. How has our society reached this point, where evil has become so construed as to charade as good? Feminists have distorted the essence of womanhood to unbelievable extremes. Furthermore, they exhibit an uncanny ability to deduce that every abortion-restricting bill will cause physical harm to women (because we all know how dangerous having a baby in the 21st century is).

Assertion #3: Opposing abortion means you hate women (and their “dignity”).

Let’s strip this final argument down to reveal its true absurdity. Taking into account my analysis of the above assertions, we’ll make two minor substitutions: abortion = murder, and women = people. The new statement reads: opposing murder means you hate people. Doesn’t sound so logical anymore, does it?

Pro-choice women have made their contempt toward pro-life women clear. While pro-choicers vehemently support a women’s “choice,” apparently that choice does not include being pro-life. When a woman becomes pro-life, she is suddenly no longer a competent individual capable of making choices. In fact, she ceases to be a “real” woman at all.

In March of this year, Democrat Pennsylvania State Rep. Babette Josephs insulted female supporters of an ultrasound bill by questioning:

“What is wrong with these women? What are they thinking about? Are they women? Or are they men with breasts?”

This comment is not only offensive; it is utterly ridiculous once the ideologies of both parties are considered. Allow me to characterize both pro-life and pro-choice women:

Pro-life women cherish their roles as nurturers and mothers. They embrace life at every stage of development, inside and outside the womb. When pregnant, they rejoice over the tiny children growing in their wombs. Their tender hearts break with sorrow when they see pictures of tiny bloodied arms and legs mauled by an abortionist’s cruel instruments. These women have strong maternal instincts that cause them to rise up and oppose the slaughter of defenseless children.

Pro-choice women ridicule the roles of homemaker and stay-at-home mom. These women will recognize a human life only once the baby is outside the womb and has taken its first breath of air. When pregnant, these women refuse to acknowledge the humanity of the new lives inside them and coldly refer to these lives as “blobs of tissue.” When faced with images of aborted fetuses, these women turn away in indifference and deny the authenticity of the pictures. These women suppress their maternal instincts and insist that killing one’s child is a “natural procedure.”

Which women sound more like “men with breasts” to you?

Democrat women love to point the finger at Republicans and declare us anti-woman. But no one gave them permission to radically redefine womanhood. And they are failing to acknowledge one important fact: we are women, too. And we are pro-life.