Abuse of Discretion: The Inside Story of Roe v. Wade - Live Action News 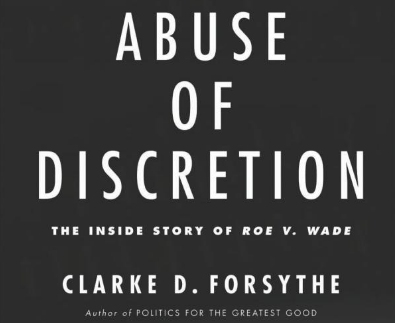 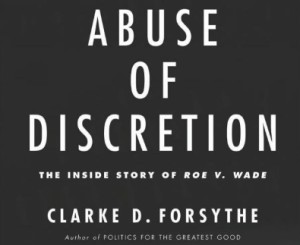 In 1973, the Supreme Court decided the cases of Roe v. Wade and Doe v. Bolton. Now, forty years after these landmark decisions, Clarke D. Forsythe, Senior Counsel at Americans United for Life, in his book Abuse of Discretion: The Inside Story of Roe v. Wade provides insight as to how these cases were decided the way they were and how they have impacted our culture. While you have to read the book to get the full story, here’s some of what I learned from reading his book.

Roe and Doe are two cases that never had a trial in the District Court. Instead, they had oral arguments for two hours that focused on procedural and jurisdictional issues. Instead of having an appellate court review the facts and legal theories of the case, the cases were appealed directly to the Supreme Court. When the Supreme Court decided to hear these cases, they did so to decide whether the case belonged in federal court. But in the end, that’s not all they did.

History was twisted and rewritten in an effort to get abortion laws overturned. Here is some advice given to co-counsel on the Roe case:

[B]egin with a scholarly attempt at historical research; if it doesn’t work, fudge it as necessary; write a piece so long that others will read only your introduction and conclusion, then keep citing it until courts begin picking it up.  This preserves the guise of impartial scholarship while advancing the proper ideological goals.

According to Dr. Bernard Nathanson, National Association for the Repeal of Abortion Laws (NARAL) founder:

How many deaths were we talking about when abortion was illegal?  In N.A.R.A.L. we generally emphasized the drama of the individual case, not the mass statistics, but when we spoke of the latter it was always “5,000 to 10,000 deaths a year.”  I confess that I knew the figures were totally false, and I suppose the others did too if they stopped to think of it.  But in the “morality” of our revolution, it was a useful figure, widely accepted, so why go out of the way to correct it with honest statistics?  The overriding concern was to get the laws eliminated, and anything within reason that had to be done was permissible.

Attorney Forsythe uses memos written between the justices and their clerks to show that several justices were determined to strike down abortion laws. In fact, ten years after the Roe and Doe decisions, the justices were aware of the state of affairs regarding abortion clinics. In a letter from Justice Powell to Justice Brennan written during City of Akron v. Akron Center for Reproductive Health:

I had thought from the discussion at Conference that we were of one mind, namely, that abortion mills do exist, and are operated to the great profit of unethical physicians who care little about their patients.

But even though the Court knew this, they invalidated a regulation that would require “second-trimester abortions up to sixteen weeks be conducted in a hospital setting.”