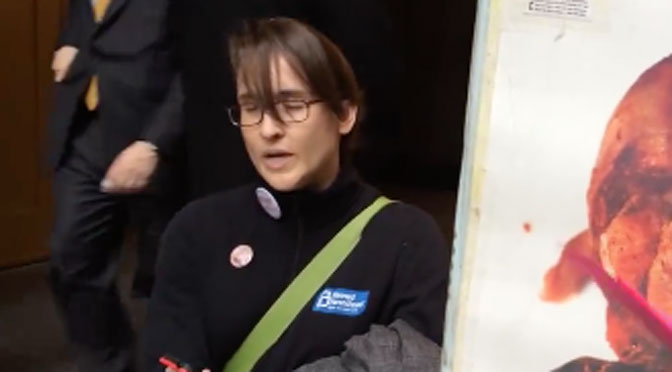 In a bizarre act of gratitude for the ability to kill preborn children in the womb, an abortion supporter was caught on video kneeling in prayer next to an image of a late-term aborted baby at an event sponsored by Planned Parenthood.

Video of the incident was captured by Matt Yonke, assistant communications director for Pro-life Action League (PLAL), during a November 16, 2015, event protest. The North American Forum on Family Planning was gathered in Chicago to recruit and train new abortion providers. The event was sponsored by Planned Parenthood and the Society for Family Planning.

According to Yonke, who wrote about the protest on the PLAL’s website, approximately 30 pro-lifers gathered to confront forum attendees. They carried photos of abortion victims as well as signs reading ‘Planned Parenthood Lies to You’ and ‘Planned Parenthood Sells Baby Parts.’

Yonke told Live Action News that shortly after pro-lifers gathered outside the pro-abortion forum’s venue, a woman from the forum who identified herself as “Sky” approached them. Yonke said they often have abortion supporters speak to them while they protest, so he was a little amused as he waited to see what she would do. Describing the act as “street theater,” Yonke admits that when he witnessed the abortion supporter kneel down to give thanks for abortion next to the image of a late term aborted baby, he was a little shocked.

We couldn’t believe it when an abortionist came out of a Planned Parenthood conference, knelt down on the sidewalk by an abortion victim photo and began to pray.You won’t believe what she had to say!

I was standing next to Joe Scheidler, who was holding the sign you see in the video next to her, and I think we were both kind of dumbfounded. Couldn’t believe she was saying the things she was saying!

Then when she was done, I introduced myself and tried to talk to her, but she just walked away.

Referring to abortion as “pregnancy outcome” and placing adoption and parenting on the same par as killing the preborn child, the woman – wearing what looked like a Planned Parenthood badge – opened her prayer, saying:

My dear heavenly father, I’m grateful today to be here at this wonderful meeting, and I wanted to express to you the gratitude and humility that I feel as an abortionist. And, I’m thankful for the support that I have from my community, from those who love me, my family and my faith.

I can imagine no person who is in greater need of Christlike love and excellent medical care than a woman who is faced with an unintended pregnancy. And I am grateful every day to feel thy spirit and thy guiding hand in my work as I speak to women of all faiths and all creeds.

The prayer went on for nearly four minutes, accusing pro-lifers of judging others and thanking whomever she was praying to for her ability to be “compassionate.” She then addressed the alleged issue of ‘abortion stigma’ – the idea that being truthful about abortion hurts women – praying that pro-lifers would change their ways: “And I would hope that you would soften their hearts and help them to see the cruelty and the damage that their actions lead to.”

Ironically, while claiming that there are “rigorous” and “scientific studies” about abortion stigma, the woman expressed her thankfulness “to be in this world” to know and use these studies to “further[] the work of the Lord.” She ended the prayer, “And I say this in the name of Jesus Christ, amen.”

She then got up and walked away.

Although “Sky” claimed to be an abortionist, abortion supporter Robin Marty cast doubt on her claim in a tweet:

Yonke pointed out that whether this woman was an actual abortionist or not, she was connected enough to be at the conference, “which means she’s pretty deep in the industry at any rate.”