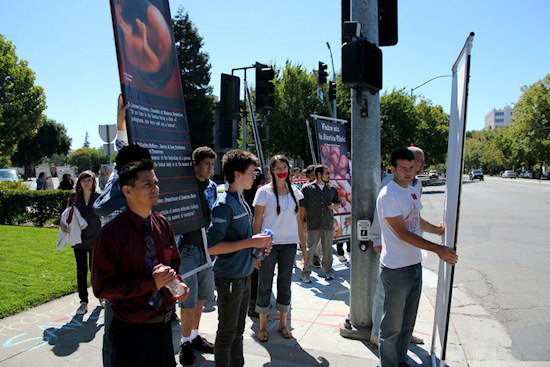 In an article here about Reproductive Services of Harlingten, an abortion clinic in Texas, an abortionist declares that if not for pro-lifers keeping a watchful eye on his clinic, he would break the law and provide abortions. Describing the situation of a patient who traveled from Mexico, Dr. Lester Minto said:

“If it weren’t for those (protesters) out there, I’d help her in a heartbeat,” Minto, 65, said, referring to anti-abortion activists gathered outside his building.

Dr. Minto has had to turn women away from his clinic because of the new rules saying that abortionists must have admitting privileges at a local hospital in order to legally perform abortions. Minto was unable to get such privileges.

Minto says that he had been performing 1500 abortions a year. He says that he will continue to counsel women. He is unclear as to what this means. He says of the women who come to him:

He could, of course, send women to crisis pregnancy centers where pro-lifers would help them to have their babies and offer counseling, baby items, and medical care.

Minto, who called the Texas abortion law “an insult to women’s intelligence,” said he would keep doing abortions “whether that means under the cover of a mesquite tree or on a shrimp boat or going to Mexico” where abortions are also illegal.

So here we have a doctor who could not get admitting privileges at a hospital saying he will perform abortions under a tree or on a boat, as well as admitting that if pro-lifers weren’t watching, he’d break the law right in his clinic. He seems willing to subject women to substandard care. Not surprisingly, there is malpractice in the doctor’s background.

In 1996, Minto received a public reprimand from the Texas Board of Medical Examiners. According to the report he:

Many times, pro-choice organizations and abortion providers put the availability of abortion ahead of the safety of abortion. This is evident when groups like Planned Parenthood fight laws setting standards to make abortion safer (but which would cause abortion clinics to make costly renovations and possibly drive some of them out of business) and when they protect abortionists who have injured or killed women.