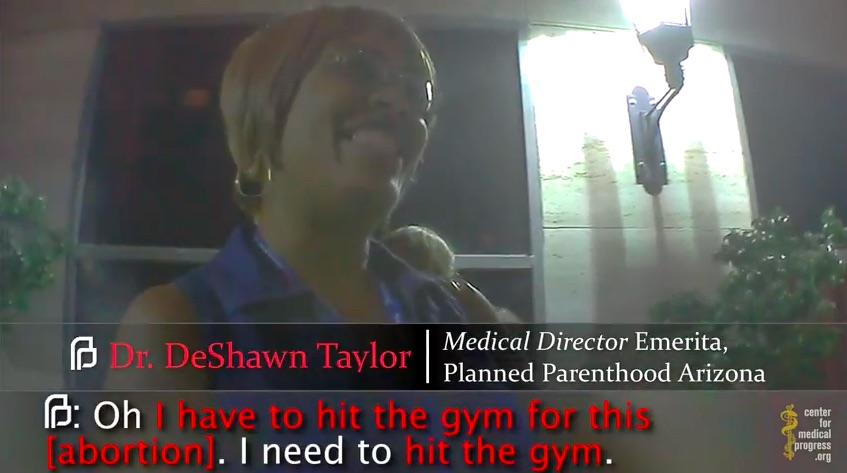 In a new video released Wednesday by The Center for Medical Progress, an abortionist makes a disturbing revelation about just how much force it takes to dismember a baby.

In the video, DeShawn Taylor, medical director emerita of Planned Parenthood Arizona, is discussing abortion procedures with citizen-journalists from the Center for Medical Progress posing as buyers working in the fetal body parts trade.

Taylor reveals to the men that “dig” – digoxin, a feticide injected into the fetal heart, fetal body, or amniotic sac to induce fetal demise during some abortion procedures – saves her from forcefully dismembering the baby, which is apparently quite a workout. She explains that while research shows that using digoxin to kill the fetus does not make the procedure easier for the well-trained abortionist, her muscles tell her otherwise.

“My biceps appreciate when the ‘dig’ works,” jokes Taylor. She goes on to explain that dismemberment abortions not involving the use of digoxin require “more force.” “I have to hit the gym for this, I need to hit the gym.”

One of the journalists questions Taylor to confirm whether she is claiming that she needs to go to the gym to prepare for performing dismemberment abortions. “Yeah,” she replies, adding that dismemberments start to become especially physically exerting for the abortionist at around 20 weeks gestation. By 20 weeks gestation, science is clear that there are pain receptors present throughout the baby’s body that are linked to the brain, indicating that the babies Taylor physically struggles to dismember may feel the process in a very different way from how she does. At 20 weeks, the baby weighs about 10 ounces and is about the size of a small cantaloupe.

Meet babies the same age as the ones Taylor aborts in this photo article.

Especially in the context of Taylor’s other comments, including an admission of the need to “pay attention to who is in the room” when dealing with babies who survive an abortion attempt, her comments on dismemberment abortions are highly disturbing, to say the least. The concept of strengthening one’s body for the purpose of dismembering other bodies is apparently funny to Taylor. But for those of us who are not desensitized to the violence of ripping limbs off and crushing skulls with forceps (or, in the words of Taylor, decompressing calvaria), these comments serve as further evidence of just how callous the abortion industry is to human life.

You can see for yourself exactly what is involved in a D&E abortion in the viral video below, which features former abortionist Dr. Anthony Levatino.