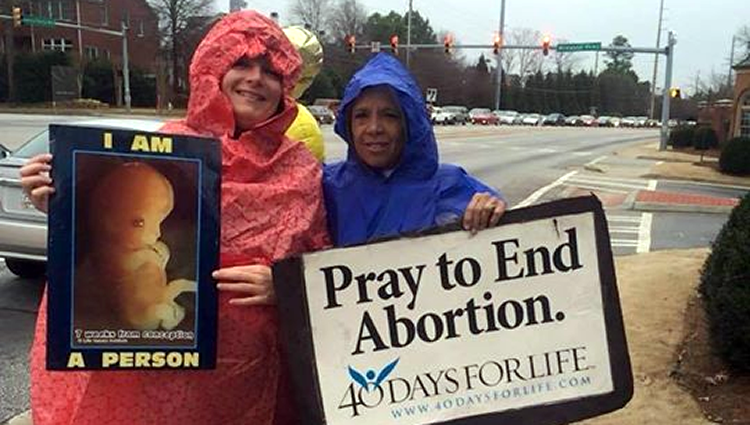 All over the world, pro-life prayer vigils continue to save lives and bring hope to women searching for more. 40 Days for Life keeps an updated account of these success stories on their website, and also records the effect the vigils have on the nation’s most profitable abortion business, Planned Parenthood.

“How effective our prayers must be!”

On day seven of the campaign, 40 Days blogged about Planned Parenthood’s reactions to groups silently praying outside of their facilities. Outside a Planned Parenthood in Nashville, Tennessee, the abortion facility had installed a large blue tarp to cover the fencing around their entire property, attempting to block the sight of those gathered to pray, as well as blocking any attempts to try to reach women entering the facility who might be considering abortion. However, the prayer vigil’s leader, Kathleen, explained that those praying have still been able to communicate over the fence as well as at the parking lot entrance. Kathleen remarked that she sees the facility’s tarp as “a compliment to us and how effective our prayers must be!”

“I didn’t go through with it!”

On day 13 in Manhattan, New York, a vigil participant chose to distribute pamphlets to women entering, encouraging them to run away from the abortion center. One of the women who received a pamphlet did exactly that almost an hour later. “I didn’t go through with it. I’m 17 weeks pregnant and they told me it’s nothing!” the woman exclaimed to the vigil participant outside. “They put pressure on me in Planned Parenthood! Now, I can’t believe I even considered it.”

On day 14, 40 Days reported noted how recent articles from the HuffPost UK have been portraying the prayer vigil as an ominous act that disturbs abortion patients. While some abortion protesters may be full of “abuse” and other kinds of “hate,” 4o Days for Life participants simply gather to pray, and make no disruptions.

And yet, that seems to have been enough to unnerve staff at the abortion facility. “It’s just really intimidating,” an abortion facility volunteer told HuffPost. “It’s dark and they’re standing there holding their rosary beads, not really saying much, praying under their breath. It’s just a really disconcerting presence….” Pro-lifers in the United Kingdom continue to stand outside abortion facilities, praying for an end to abortion, despite attempts to discourage the prayer vigil.

The number of babies saved during the prayer vigil has reached at least 107, according to 40 Days for Life. Prayer makes an impact on these abortion facilities, their staff, and the patients’ lives as well as the lives of their preborn children.

To find a vigil location near you, visit the website for 40 Days for Life.