(New Wave Feminists) The documentary film After Tiller is a fascinating look at the abortion industry, but it’s also a fascinating piece of propaganda. It delves into the issue of late-term abortions, a topic too grisly for most people to consider.

The film focuses on a few of the few – the tiny percentage of abortionists who will do the procedure all the way into the third trimester of pregnancy. Only four doctors to be exact. 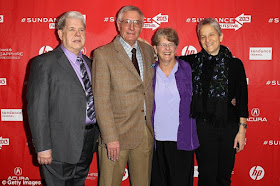 Dr. Hern is one of them. Most days he commits late term abortions in Boulder, Colorado. However, when reminiscing about how he got his start in After Tiller, he talks about his peace corp days in Brazil…

What most people will conveniently overlook as he pulls at our heartstrings, is that he was looking at this community through a lucky set of eyes. A very lucky set of eyes. He chose to go to this impoverished country. He was not born there and forced to live there, like these women do day in and day out. He chose to tend to these underprivileged children for a set amount of time. He was not forced to conceive and care for them his entire life like the women of this village who he claims he was simply attempting to help. He chose to offer “safer” abortions as the “solution” to these women’s problems, because he doesn’t have to live with the fallout of the many more unplanned pregnancies and subsequent terminations that will continue to plague these mothers, sisters, and daughters since the real problem was never actually addressed at all. Meanwhile, he has flown back to the comforts of his American life and now uses their circumstances to justify his living extinguishing other human lives.

The pregnancies are only a symptom of – and abortion merely a BandAid for – the real problem: that women in many communities the world over live in a deeply patriarchal society where they have zero power, autonomy, freedom, or opportunity. We hear phrases like “baby machines” bandied about in the U.S., but here it might actually apply. Most of these women are going to grow up, be impregnated, and bear child after child, and there is nothing they can do about it.

Reproductive rights mean nothing if you ignore the fact that these women have no control over whether or not they will reproduce in the first place. And rather than addressing the true oppression these women are facing, Dr. Hern simply offers them an abortion after their rights have already been sufficiently trampled on.

That is lazy activism from a privileged man who wants to pat himself on the back when really he’s only compounding the problem.

I wish this were a unique story, but unfortunately this is how the west tends to treat most people not lucky enough to be born here in America (and of course those unlucky ones here who had the audacity to be born poor). Here’s some pills; if they don’t work, we’ll kill your children for you. It’s not that we don’t care, it’s just that we think these sorry excuses for “help” are the answer, when the real answer is to encourage economic health and self-sufficiency. “Give a man a fish…” We all know the saying.

Meanwhile, when we discuss abortion, we often hear the argument “But what about a woman’s choice?” The response is pretty simple: “We are all for a woman’s choice, but by the time there is an innocent human life inside her, the choice has already been made.”

But what about the truly poor women of the third world, who don’t get to choose whether or not they get pregnant, or raped by their husbands for that matter? Can your magical Western pills stop that from happening? I didn’t think so…

It’s difficult to see clips of a poor Brazilian woman, sitting outside a hut, no running water, no electricity, only the food she can grow or kill, with seven children playing around her in the dirt, and no say whatsoever in whether or not she has more. The ones she has are already hungry. Who on earth would say it’s a good idea for her to keep having child after child she can’t feed?

To the slacktivists, the answer is, of course, is birth control and abortion: send a (probably male) doctor over there to pat her on the head and scramble her baby up in her womb and suck it out and dispose of it and send her back to her life with a few hormone altering packets of class 1 carcinogens, where she will continue to have no power or control or real choice. Then if she gets pregnant again, and he’ll go suck her next baby out, and so on and so forth. She’ll still be poor and helpless, and he’ll be a savior… to some. But certainly not to her.

That is a sorry excuse for a solution.

The answer, of course, is to advocate globally for women’s rights, and for economic opportunity, which is the only way women will be able to access those rights. A world in which every girl can decide for herself what kind of life she’s going to have; every woman can choose to marry or not marry, be a mom or not be a mom; every woman can wake up in the morning and have power and autonomy over her own body and her own life, from the moment it first exists.

Maybe it’s just a dream, but that’s the kind of world we are working toward.

These “saviors” in After Tiller do nothing but perpetuate the victimhood of women. They don’t actually solve any problems. They just help keep a repulsive system running by propping up a patriarchy that preys on poor women.

After Tiller is absorbing, fascinating, and seductive. But it’s propaganda. Don’t let it fool you. Women – all women, everywhere – deserve much better than the desperate, wounding abomination of abortion. They deserve true liberation.

Editor’s Note: This article was originally printed at New Wave Feminists on February 9, 2016 and is reprinted here with permission.