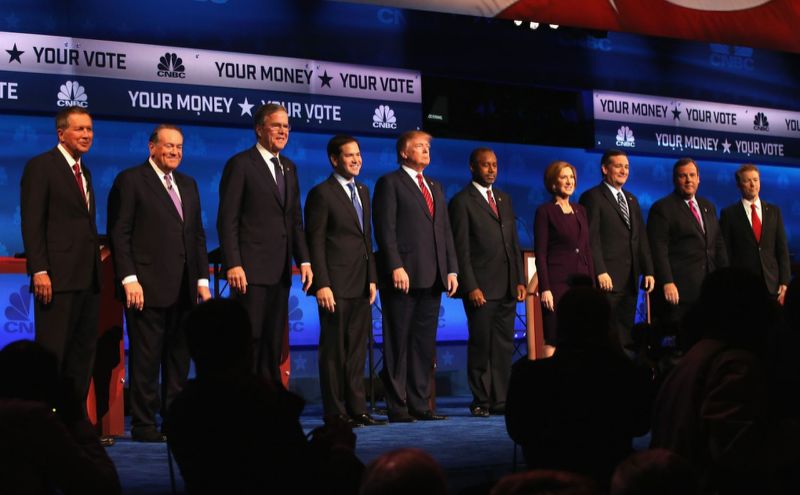 The first came when former Arkansas Governor Mike Huckabee used his introduction to highlight his call for “something bolder” than just defunding Planned Parenthood: “Let’s get rid of abortion once and for all by applying the Fifth, and Fourteenth Amendment to every person from conception, because that means that we recognize that no person can be deprived of life or liberty unless they have due process”—a position Huckabee has expanded upon in the past, arguing that pro-lifers cannot afford to wait for the Supreme Court to overturn Roe v. Wade on its own.

Next, former Hewlett-Packard CEO Carly Fiorina was asked whether she had “any regrets about” fiercely highlighting the Planned Parenthood undercover videos in the wake of a Texas grand jury’s decision to clear Planned Parenthood and indict the pro-life investigators instead. Fiorina stuck to her pro-life stand, noting that “Hillary Clinton hasn’t been indicted, either. So that tells us a lot about our justice system in this country. But, look, the facts of Planned Parenthood have not changed.”

The reality is, most Americans find this practice horrific. Most Americans find horrific that Hillary Clinton’s position on this is it’s not a life until it’s born. Most Americans find horrific Hillary Clinton’s position or the Democrat party’s position, that a young woman does not need her mother’s permission to get an abortion. But if you are 13 years old, you can get an abortion, but you can’t go to a tanning salon without your mother’s permission. A president Fiorina — in a president Fiorina budget, there will not be one dime for Planned Parenthood, although there would be a lot of money for women’s health and we will finally pass the pain capable unborn child protection act. I will always stand for life and religious liberty because this is about the character of our nation.

Moderator Martha MacCallum also asked former Pennsylvania Senator Rick Santorum why he did not attend this year’s March for Life, to which Santorum noted that he has been to many past marches, explained that this year “that maybe it would be better for me to get out and do some campaigning and not be stuck as my wife and kids were for a week, piling out of two and a half feet of snow,” and reiterated his long record of fighting for the pro-life cause in politics and his personal life:

If you want someone that is going to talk a good game, there are a lot of folks on this stage that have talked a good game on the issue of life. Not only have I talked a good game on life and I’ve done some things. But I’ve also lived it. You know, one of the things Saint Francis said was, you know, if you preach the gospel, then if you have to, speak. The bottom line is, that twice in my life, we were counseled to have an abortion, one with our son Gabriel and one with our little girl Bella. And neither time did Karen and I for a moment think about it because we know that life begins at conception.

After his answer, Fiorina chimed in to say, “It is outrageous frankly, that Fox News, and you, would question the pro-life credentials of Rick Santorum.” However, the March for Life has publicly stated that Fiorina was the only presidential candidate invited to speak because she fit with the year’s theme that “pro-life and pro-woman go hand in hand.”

Former Virginia Governor Jim Gilmore was also present during the undercard debate, but was not questioned about being the only pro-abortion candidate in the field (following ex-New York Governor George Pataki dropping out). Gilmore has supported some pro-life reforms and criticized Roe, but believes elective abortion should be legal during the first eight weeks of pregnancy.

In the primetime debate, New Jersey Governor Chris Christie answered the challenge to name one thing the federal government should not do by pledging to “get rid of Planned Parenthood funding,” going on to declare, “when you see thousands upon thousands upon thousands of children being murdered in the womb, I can’t think of anything bigger than that.”

Later on, moderator Chris Wallace asked Kentucky Senator Rand Paul to explain whether he would leave abortion to states to decide for themselves by explaining that he supported both state and federal solutions to abortions, highlighting his recent introduction of the Life at Conception Act in the Senate, though he delivered a somewhat-mixed message on whether he would allow states to permit abortion in the absence of Roe:

So the federal solution would be the Life at Conception act which is an act that would federalize the issue. But I’ve also said for the most part, these issues would be left back to the states. So there might be an occasion if we did overturn Roe v. Wade — Roe v. Wade nationalized the issue. If you had the court reverse Roe v. Wade, it would become a state issue once again. I think it would be better the more — the less abortions we have, so the more states that we have that made abortion illegal, the better, as far as trying to save and preserve lives.

Our country is in crisis. We’re worried for the future of our children and we’ve have been burned over and over again. The central question in this race is trust […] Who do you know will defend life, marriage and religious liberty? Examine our records, pray on it and I will be honored if you and your family will come caucus for us on Monday night.