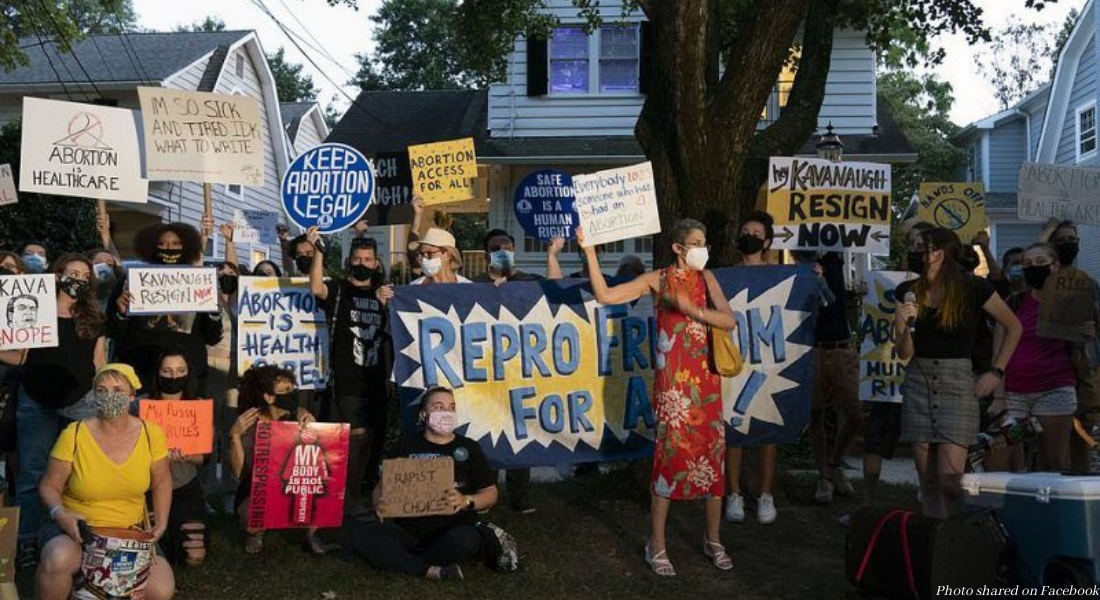 Abortion activists took to the streets outside of Supreme Court Justice Brett Kavanaugh’s home last Monday to protest his part in refusing to block the Texas Heartbeat Act.

According to Maryland Matters, about 50 protestors gathered outside the home Kavanaugh shares with his family on Monday evening, calling for the Supreme Court Justice to resign. The rally was organized by the activist group Shut Down DC, which was vocal about the event on social media.

The group marched along the quiet neighborhood streets carrying signs and yelling chants like, “my body, my choice,” and “resign now.” Pro-abortion messaging was also chalked on the sidewalk outside Kavanaugh’s home.

Two women with the group Students for Life reportedly attended the protest in an attempt to interview protesters about the reasons for their protest. They were met with hostility, and two people they interviewed claimed that human life does not begin until birth, emphasizing the fact that a woman should be able to decide the fate of the child in her womb.

On its website, the group called Kavanaugh “the Court’s most anti-woman justice,” a belief that may demonstrate why they chose to single him out for the protest; Kavanaugh was one of five Supreme Court Justices who voted to let the Texas law stand. “Make no mistake, what’s happening to reproductive justice and abortion rights is far bigger than one person,” organizers said. “But Kavanaugh is playing a key role, and so far he’s been protected from any backlash. No more.”

“It is absolutely unacceptable from my point of view to involve and major public figure’s family or their home or to involve yourself in criminal trespass in the name of political freedom of speech. There are proper venues to express yourself and I don’t believe a person’s home or their family should be fair game in this business, said Durbin. “I don’t care whether you’re right or left, that is unacceptable as far as I’m concerned in expressing your political feelings,” he added.

Republican Chuck Grassley agreed, saying, “This protest looks like another blatant attempt to intimidate the judiciary and anyone who disagrees with the radical agenda pushed by partisan advocates.”