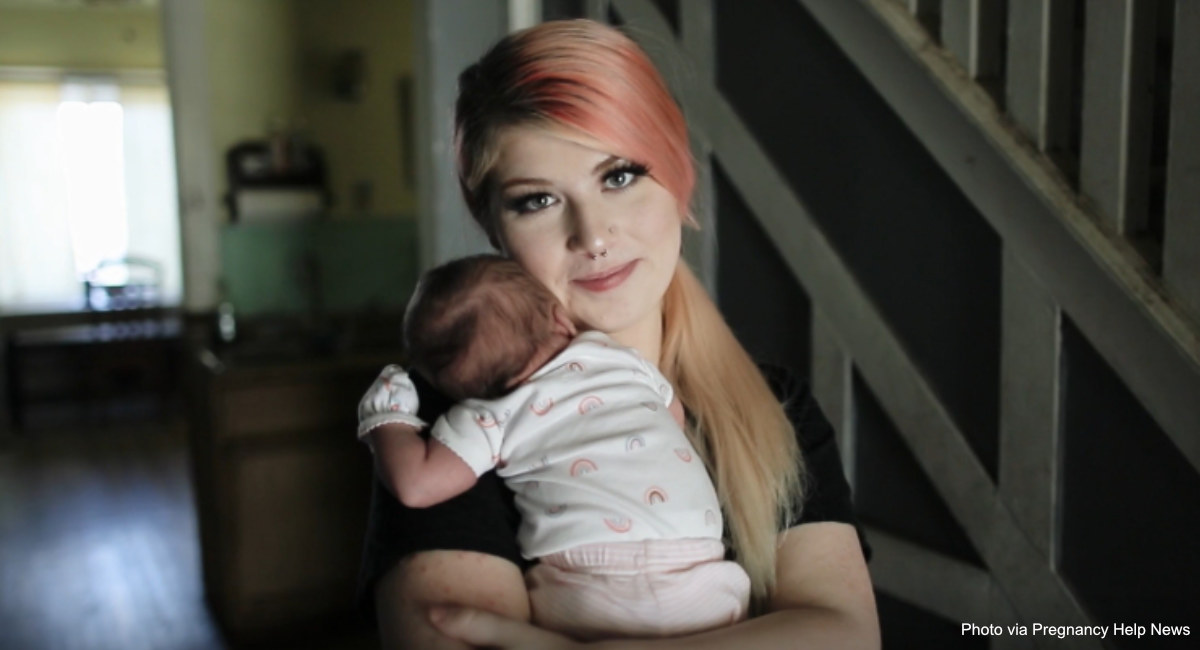 (Pregnancy Help News) A young woman was so thankful for the assistance and support she received from a Pittsburgh, Pa. pregnancy help medical clinic and the Abortion Pill Rescue Network that she was moved to share her story.

“What are the chances you’ll find somebody who wants to help you?” Ashley said.

Just out of high school last year, Ashley was focused on partying. When she began to regularly feel tired, she had no idea she was pregnant.

After taking a pregnancy test and getting a positive result, she was frightened.

When Ashley told the child’s father, he urged her to have an abortion. She didn’t want to, but eventually conceded.

She had an appointment for a chemical abortion at seven weeks and five days gestation. The abortion facility staff told her that once she took the first abortion pill, it would block her hormones, and her baby would stop growing.

The chemical abortion regimen consists of two drugs. The first, mifepristone, blocks progesterone, the natural hormone in a woman’s body necessary to sustain pregnancy. The second drug, misoprostol, taken a day or so later, causes the mother to go into labor and deliver her deceased child.

Abortion Pill Reversal (APR) entails taking progesterone to counter the first abortion drug. If a mom acts quickly enough after taking the first abortion pill, it may be possible to save her unborn child through the APR protocol.

“And then I took the abortion pill,” Ashley said. She immediately had regret.

“I felt like I did the wrong thing,” Ashley said. “And I hated that I did that. Is there any way I can take back? Like I can’t take this back. I just killed my baby. That’s scary.”

She kept telling herself that she went ahead with the abortion because she was unsure. “But it’s like, exactly, you were unsure,” she said, “you didn’t give it the benefit of the doubt. You didn’t try to be a mom.” Ashley was terribly upset.

Ashley wondered how she would live with this decision for the rest of her life. She contacted the abortion provider for help, to no avail.

“I called back the doctors who gave me the abortion pill and they were like, no, no. Like the progesterone is gone,” Ashley said. “I’m freaking out. I was terrified. I thought, okay, I lost my baby. I did it. There’s nothing I can do about it.”

Ashley went on the internet and searched, “Is there any way to reverse an abortion?”

She called the Abortion Pill Rescue® Network (APRN) hotline and heard back from a nurse consultant first thing in the morning. The nurse connected her with Women’s Choice Network, where Nurse Manager Gloria Hale arranged for her progesterone prescription. This took some doing since it was a Sunday.

“I would not still [have been] pregnant if it wasn’t for that,” said Ashley.

Ashley said several times over the phone that she just wanted to see the baby’s heartbeat, Hale said. They were successful in getting the progesterone started and Ashley came into the pregnancy help medical clinic Monday morning for an ultrasound.

“She brought her mom with her,” Hale told Pregnancy Help News. “Words can’t capture the relief shown and then absolute glow on her face as we showed her the baby’s heart beating. I’ll never forget Ashley’s excitement as she grabbed her mom’s hand and said, ‘Mom, that’s my baby!’”

The APRN is managed by Heartbeat International and is made up of around 1,100 medical professionals and pregnancy help organizations that facilitate APR. The Network’s statistics show that to date, 3,000 lives and counting have been saved thanks to APR.

READ: Report: More than 3,000 lives have been saved by abortion pill reversal

“Every night, I laid down and I prayed, and I let God know I’m thankful for him,” Ashley said. “I reversed my abortion, and I am pregnant. I’m about to give birth to a beautiful baby girl.”

Ashley remarked on the help she received from the APRN and Women’s Choice Network, and how it was offered without judgement.

“Nobody’s telling you what you did was wrong and now you have to live with it,” she said. “They’re 100%. Like I will help you from my own pockets. I will take money out of my own pocket and go help you.”

It can be a roller coaster of emotions not only for the client but for those involved in caring for her as well, Hale said.

“From responding to her desperate phone call with words of affirmation, encouragement, and hope, to holding our breath alongside of her as the ultrasound begins and we’re hoping to see a viable pregnancy,” she said. “However, with all that said, it is truly a blessing and privilege to come alongside these brave women and support them in every way we can through their APR and pregnancy experience.”

The young mom shared her story last fall via video with the attendees of the Women’s Choice Network banquet, then joining staff onstage afterward with Thailynn.

“It was an incredible moment for our crowd,” said Executive Director Amy Scheuring. “It’s so humbling to see how God uses us to intervene and transform.”

After the Women’s Choice Network event Ashley and Thailynn were doing well, settling in with Ashley’s parents.

“And the whole family is in love with Thailynn,” Hale told Pregnancy Help News.

“Woman’s choice network. 100% gave me my baby,” said Ashley. “They saved not only my life, but my daughter’s life.”