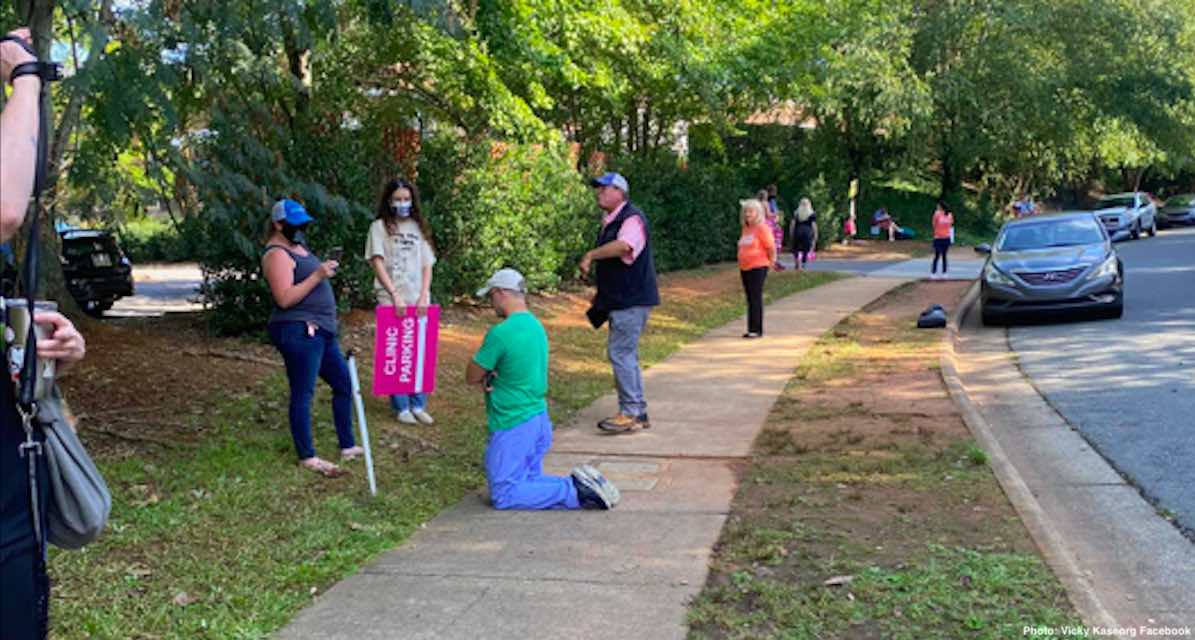 (Pregnancy Help News) Doctors often are known by their degrees and accolades. You could know that about Dr. Matt Harrison, including numerous patient’s choice awards and compassionate doctor recognition, just to name a few, but it wouldn’t show you his heart.

Perhaps a recent photo of Harrison kneeling in prayer on a sidewalk in front of an abortion center captures him best. Or the comment left by one patient, “You won’t find a more pro-life doctor. He truly has a vested interest in your health.”

If you are searching for a family doctor, there may not be a more important qualification than pro-life. Harrison values life so deeply, his patients can feel it and it’s not hard to see why.

This is just the preamble to his areas of service. In addition, Harrison gives of his time to run a clinic for prenatal care for uninsured women. HELP Pregnancy Center in Monroe, NC, is about an hour from his home.

Harrison is also the medical director of the student health clinic at Belmont Abby College. And he is also a medical advisor for Priests for Life and the Abortion Pill Rescue® Network.

For a week each year, Harrison runs clinics in Ghana and Vietnam. He has also been on mission trips in Mexico. 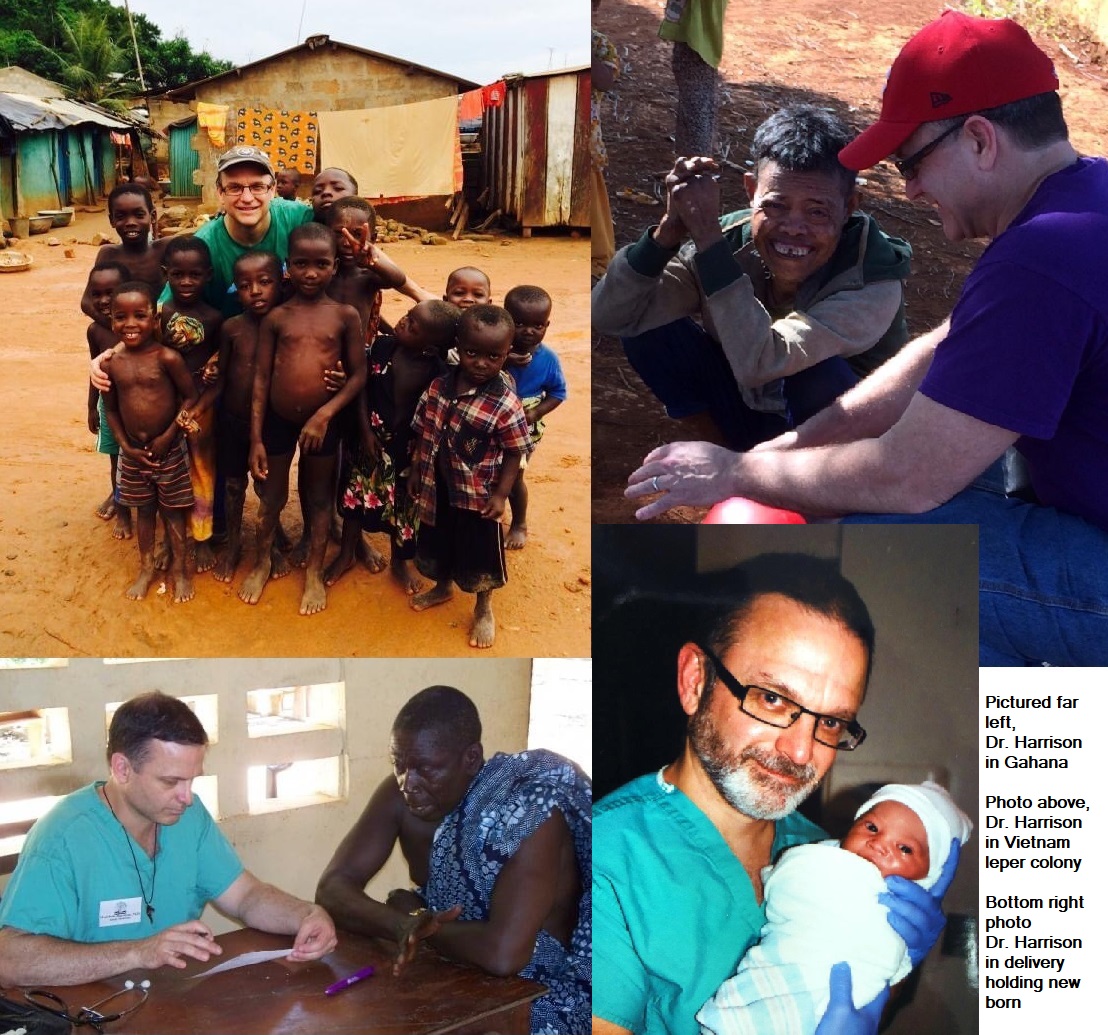 Harrison and his wife have seven children. “My wife is my biggest hero,” he stated regarding her backing of his work. “She helps and supports me in all this stuff. I couldn’t do any of this stuff without my wife. She is a spiritual rock and prayer warrior in our family.”

Praying to save lives from abortion is a family affair, as the Harrison family regularly prays in front of three different abortion clinics in Charlotte. This started 20 years ago. In 2001 Dr. Harrison had begun a friendship with Flip Benham, who is a street preacher and pro-life advocate. Benham challenged Harrison to step up what he was doing in pro-life work. 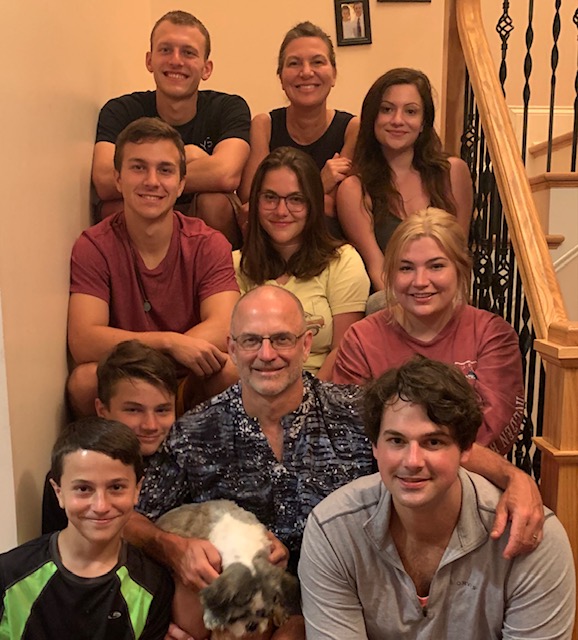 So, Harrison started praying at the abortion clinics, offering help to women, talking with the escorts and the security teams outside the facilities. Two of the Harrison sons (Matthew and John) are seminary students, and they have often brought friends along to pray at the clinics.

The day of the event captured in the photo of Harrison was much like many of the other times he had prayed there. Supporters from the abortion facility came over and began filming Harrison. They were taunting him and saying he should be sued.

Pro-life advocate Vicky Kaseorg witnessed the exchange and was appalled by the mocking of Harrison.

I have seen some of the many babies who were saved because of that life-saving intervention. I call him whenever I have a conflicted mom wavering between abortion or choosing life with medical concerns and he always picks up and always speaks to those women for free.

Harrison tried to engage in a conversation with the pro-abortion advocates. Because they were bringing up APR, he started to tell them about Dr. Mitchell Creinin’s flawed study of the abortion pill reversal.

The abortion pill reversal protocol involves prescribing progesterone, the natural hormone in a woman’s body that sustains a pregnancy, to counteract the effects of the first of two drugs in the chemical abortion regimen. Progesterone has been similarly used to treat women at risk of miscarriage for decades.

Creinin is an abortion provider and paid consultant for Danco Laboratories, the manufacturer of mifepristone, the first chemical abortion drug. He and other abortion advocates authored a study purportedly examining the effectiveness of APR, but the study was halted after some participants – who were given the first abortion pill – experienced “severe hemorrhage requiring ambulance transport to hospital,” and one losing enough blood to require a transfusion.

While the side effects experienced by women in the study are commonly known risks of the abortion pill, and the Creinin study was incomplete, it was widely misrepresented to disparage APR.

In an interview this past fall with Pregnancy Help News, Dr. Catherine Stark explained the significance of Creinin’s study. “It showed that progesterone was working to reverse the effects of RU-486 so they stopped the research saying it (the research) is too risky,” she said. “They will not acknowledge that the abortion pill is the problem.”

As with the bias of the Creinin research team, Harrison’s opponents outside the abortion center that day were not open to any viewpoint contrary to their own. He tried to explain about the faulty study, but they were too riled up to talk, so he decided to just kneel and pray.

Kaseorg, who took the photo, stated, “As they taunted and spewed their nasty, slanderous remarks, he said not a word but kneeled on the sidewalk and prayed. Later he told me he was praying for them.”

Harrison found the taunting to be very distracting as he was trying to pray. He said, “The devil knows my weakest point is pride, so my best response is getting on my knees. I can tell they are very scarred individuals with very deep wounds, and I pray they will not propagate the violence against mothers and their babies.”

Prayer has been an effective weapon for Harrison especially in the battle for saving children from abortion. In 2006 a 20-year-old woman named Ashley entered Harrison’s office and asked if he could stop the effects of the abortion pill. The first thing he did was pray.

Harrison searched through his medical books and decided on using progesterone injections to counter mifepristone which Ashley had taken 36 hours earlier. He hoped the progesterone would act as it has in the case of maintaining pregnancies at risk for miscarriage for over 50 years.

Ashley delivered a healthy baby girl, named Kaylie, in 2007. That first APR baby is now 13. This opened a door to what has become more than 1,000 babies saved through APR protocols. Harrison’s work was made known to Dr. George Delgado in California, who had also begun utilizing the same protocol to disrupt the abortion process.

Delgado was in the midst of writing the 2012 Delgado and Davenport article published in The Annals of Pharmacotherapy when he reached out to Harrison in 2011. Delgado’s desire to include Harrison’s data in the study prompted the call. This was the beginning of Delgado and Harrison’s association.

In 2013 the doctors joined in a press conference in Washington, D.C. announcing the introduction of a “kit” for doctors’ offices containing the protocols for APR. The Abortion Pill Rescue® Network (APRN), which now includes approximately 900 providers, was founded by the two doctors.

On April 12, 2018, the APRN 24-7 helpline and administration of the provider group was turned over to Heartbeat International. Both doctors remain as medical advisors for this effort.

In a 2015 interview with Charlotte’s local Fox affiliate about APR, Harrison said that while he identifies as a pro-life doctor, he feels that what he’s doing with APR is giving women a choice. “I see it empowering these women,” Harrison said. “We need to be ready for the women who feel they’ve made a mistake, who say, ‘what have I done, I want to help save that baby.’ We need to be ready within an hour’s notice to get them the medication they need to reverse the process.”