Operation Rescue conducted a survey of all abortion facilities in the United States from November 18 to December 6, 2019. They defined abortion facilities as independent businesses that commit abortions outside of a hospital, and looked at two categories of abortion: surgical and chemical (abortion pill).

On a state by state basis, Operation Rescue found that New York and New Jersey each added four abortion facilities, which the group attributes to the repeal of regulations on abortion in those states. The states with the largest decrease in abortion facilities were Maryland and Massachusetts, which each saw three facilities close. Massachusetts has a bill before the state House and Senate that would ensure abortion is legal at any time for any reason, and remove parental notification requirements for minors. In addition, Rhode Island became the seventh state with just one remaining abortion facility, joining Kentucky, Mississippi, Missouri, North Dakota, South Dakota, and West Virginia. 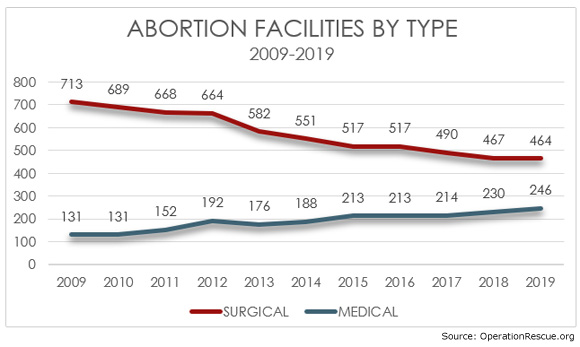 Of the facilities that closed in 2019, one was Clinic Latina in Phoenix, Arizona, run by abortionist Ronald Yunis who was arrested after he pulled a gun on a pro-life activist in October. Another three were part of American Women’s Services with locations in Baltimore, Cheverly, and Silver Spring, Maryland. They were all chemical abortion (abortion pill) facilities owned by abortionist Steven Chase Brigham. It is unknown why these facilities closed but they were forced to stop committing surgical abortions in 2013 after it was uncovered that they were illegally administering misoprostol to women without a licensed doctor present. The Baltimore location is where Maria Santiago died after going into cardiac arrest after an abortion in 2013. None of the staff, including the abortionist Iris E. Dominy, had up-to-date CPR certification. The defibrillator was broken, and the crash cart in the hall was not used to help Santiago.

The full report can be read here.