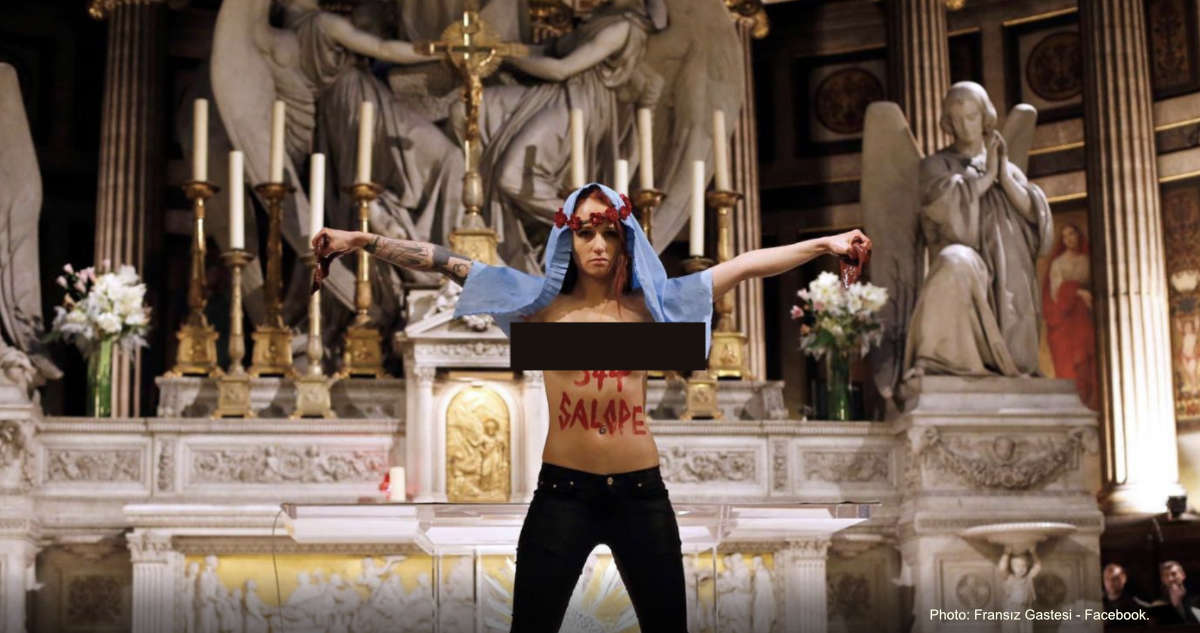 According to the Catholic News Agency (CNA), the European Court of Human Rights (ECHR) has unanimously ruled in favor of a former Femen activist who simulated an abortion of baby Jesus using calf’s liver on the altar of the church of La Madeleine in Paris.

On December 20, 2013, Eloïse Bouton entered the church during a choir practice, topless and wearing a blue veil intended to evoke the Virgin Mary. “Christmas is cancelled” was scrawled on her back and “344e salope” (an obscene reference to Simone de Bouvoir’s pro-abortion manifesto) was written on her stomach. She then urinated on the floor.

“Christmas is cancelled!” Femen wrote on its Facebook page following the desecration. “From the Vatican to Paris. The international relay of Femen against the anti-abortion campaigns led by the Catholic lobby continues, the holy mother Eloïse has just aborted the embryo of Jesus on the altar of the Madeleine.”

In December of 2014, a French court found Bouton guilty of sexual exhibition and gave her a one-month suspended sentence. In addition, Bouton was ordered to pay 2,000 euros in damages and 1,500 euros in legal expenses to the Parisian church. The judgment was confirmed on appeal before the Court of Cassation, the highest judicial court in France.

However, the ECHR ruled that the French courts violated article 10 of the European Convention on Human Rights relating to freedom of expression, because the prison sentence was “imposed in the context of a political or public debate.”

The judges wrote: “In the present case, the sole purpose of the applicant’s action, for which no insulting or hateful conduct was alleged, was to contribute to the public debate on women’s rights.”

The European court further ruled that the French courts “limited themselves to examining the question of the nudity of [Bouton’s] breasts in a place of worship, in isolation from the overall performance of which it formed part, without taking into consideration, in the balance of the interests involved, the meaning given to her behaviour by the applicant.”