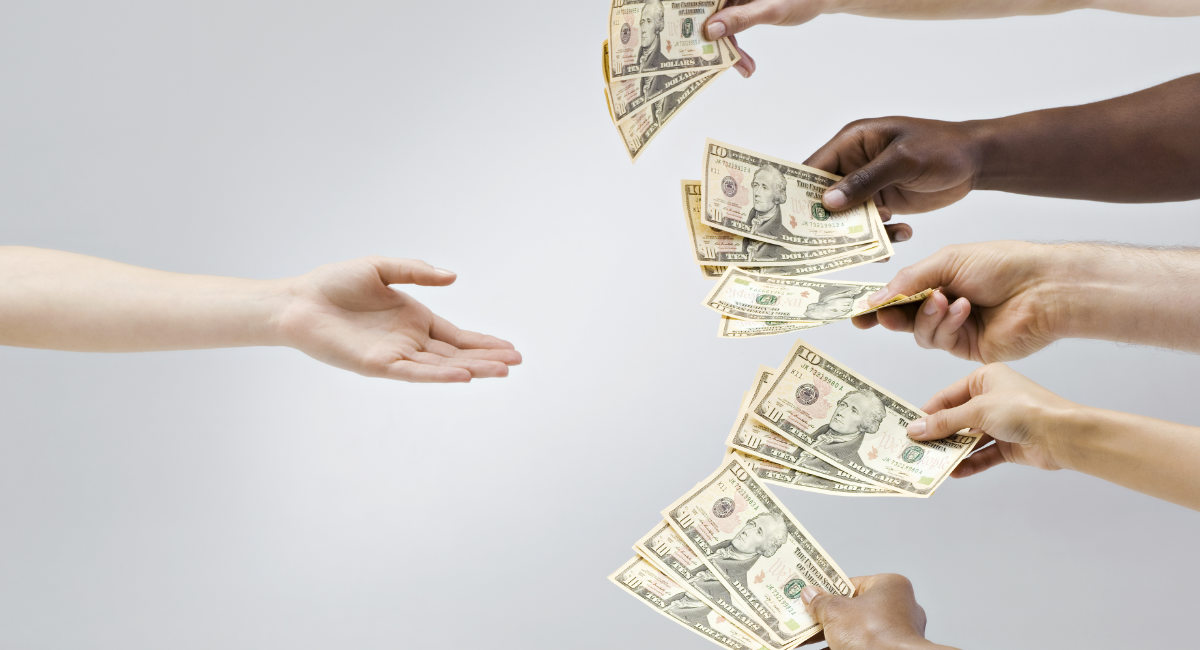 Hundreds of thousands of dollars are being raised on crowdfunding sites for abortion facility relocation costs and staff support in the wake of the Dobbs v. Jackson Women’s Health Organization Supreme Court case which overturned Roe v. Wade. A search on the GoFundMe website revealed the plans of multiple abortion facilities to expand or relocate to continue their lucrative abortion business.

Interestingly, some of the abortion facilities appear to now be in the position of relying upon donations from supporters to remain open. This has been the financial situation all along for pro-life pregnancy resource centers, which do not charge for their services to women and families and which need increased support from pro-life individuals to allow them to support more women in an environment of increasingly strident political opposition.

Robin Marty of the Yellowhammer Fund and the Director of Operations for the West Alabama Women’s Center is seeking $500,000 to stay in Alabama and “offer sliding scale and free contraceptives, miscarriage management, annual exams, STI testing and treatment, gender-affirming healthcare and all of the other services.” The facility has raised $27,500 so far. This is essentially a tacit admission that abortion has been, up to this point, the business’s main source of income.

A supporter of the Alabama-based Reproductive Health Services (“RHS”) is seeking $25,000 to “PROVIDE ASSISTANCE FOR THE STAFF who are brave enough to lose their jobs rather than go against the right of choice.”

Abortionist Paul Isaacson, the co-owner of Family Planning Associates Medical Group in Arizona, said he is packing up to leave the state but is seeking $100,000 for his expenses. “Although we are not seeing patients, we have many ongoing expenses, including rent, health insurance, malpractice insurance, equipment leases, and many others. We also need help supporting our staff as they transition to other jobs,” he wrote. He has raised $6,200 so far.

PROVIDERS PACKING UP: Even though the personhood law was blocked, it’s not enough for doctors (like Dr. Issacson) to be comfortable to provide abortions. He’s started a GoFundMe hoping for clarity and a possible change to reopen ⬇️⬇️⬇️ pic.twitter.com/X5VHNac3UO

Keith Reisinger-Kindle and two others are seeking $50,000 to open an abortion facility on the Indiana/Illinois border to “minimize the distance patients have to travel for care.” They have raised $10,000 so far.

A supporter for Affiliated Medical Services is seeking $50,000 to relocate “our clinic, right across the border in IL.” They have raised $180.

Delta Clinic of Baton Rouge in Louisiana’s administrator Jay Turner said the facility “stopped providing services effective 6/24/22 in accordance with the SCOTUS decision to overturn Roe V Wade,” so he is seeking $200,000 to “provide six months severance pay to our staff.” He has raised $3,100 so far. Also in Louisiana, Lillian Newton started a GoFundMe campaign to raise $50,000 to assist Hope Medical Group for Women employees which she claimed were devastated by their closure. So far, they have raised $2,500.

Partners in Abortion Care, “an OB/GYN and a certified nurse-midwife with more than two decades of abortion care experience between us,” founded by Morgan Nuzzo and Diane Horvath, is seeking $500,000 to open a new clinic in Maryland. They have raised $368,000 so far. 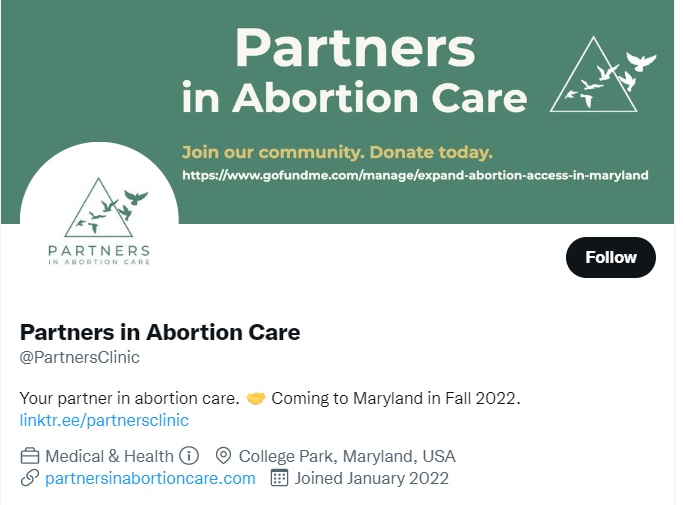 Late-term abortionist LeRoy Carhart, who commits abortions in Nebraska, is seeking $500,000 for his later abortion facility,  C.A.R.E. (Clinics for Abortion and Reproductive Excellence) because he claimed “we can no longer meet the volume demand in Nebraska, and the state government is simultaneously discussing abortion bans.” Carhart claims the funds are needed to “open a new 1st and 2nd-trimester abortion clinic in Pueblo, Colorado.” Colorado has no limits on abortion.

A separate supporter is seeking $19,000 for the facility as well.

Parkmed NYC abortion facility claims that “Independent clinics now need to rely on donations from individuals and communities to keep functioning” and is seeking $250,000 “to raise awareness of these ever-rising expenses, and in turn seek financial assistance from our community to aid in our clinics sustainability. Unfortunately, independent clinics such as our self are not supported by donations from large corporations and/or governmental agencies.” So far, the facility has raised $100.

Also in New York, Choices Women’s Medical Center (owned by millionaire abortionist Merle Hoffman) is seeking $50,000 to “go to the cost of procedures for out-of-town patients; for travel expenses and housing.” They claim, “We also need funds to spread the word broadly on social media and let people know how Choices can help patients of all ages.” So far, the business has raised $755.

Buffalo Women Services (BWS) in New York is seeking $500,000 to “purchase the lot next door” so pro-life sidewalk counselors cannot offer help to clients. “We are Terri Fregoe and Katharine Morrison, MD, the owners and workers at Buffalo Women Services in beautiful Buffalo, NY, and we thank you!” they wrote. The abortion business has raised over $55,000 so far.

North Dakota Abortion Defender is fundraising for the Red River Women’s Clinic of Fargo, North Dakota. They already raised over $1 million for a new location in Moorhead, Minnesota. “Space has been purchased in Moorhead, MN but renovations and furnishings are needed while care continues at the Fargo, ND location (as long as it is legally allowed). Operating one clinic while renovating another will be incredibly expensive and capital is needed,” they wrote, adding “With the shuttering of our 4 Texas clinics, we do not have the financial reserve to open in New Mexico without your support.”

Northeast Ohio Women’s Center is seeking $100K to expand “services into Michigan and Pennsylvania,” and has raised $2,100 so far.

In Tennessee, abortionist Wesley F. Adams with the Bristol Regional Women’s Center in Bristol is also raising funds to relocate. “[W]e have secured a location in Bristol, Virginia, where we will offer abortion services legally. We will need all the support we can receive to make this happen. Funds raised will be used to purchase medical equipment, obtain an ultrasound machine, and acquire other items necessary to open a new office in Bristol, Virginia,” he wrote. According to WJHL, the facility will be called “Bristol Women’s Health, PLLC.”

Abortion chain Whole Woman’s Health is seeking $750,000 to move from Texas to New Mexico, and so far has raised $306,000. “So we are asking for your help as we pack up our McAllen, Fort Worth, McKinney and Austin clinics, buy and renovate a building, relocate and hire staff, and set up licenses and certifications in New Mexico,” the GoFundMe states. 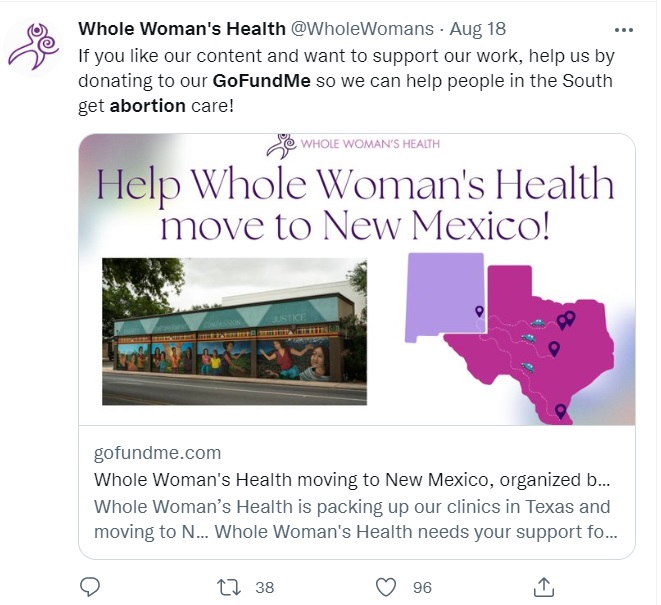 WomansChoiceCruise.com is seeking $5 million to “redesign and retrofit a 500 ft. Cruise ship into a floating abortion clinic.” The ship will be named Woman’s Choice. 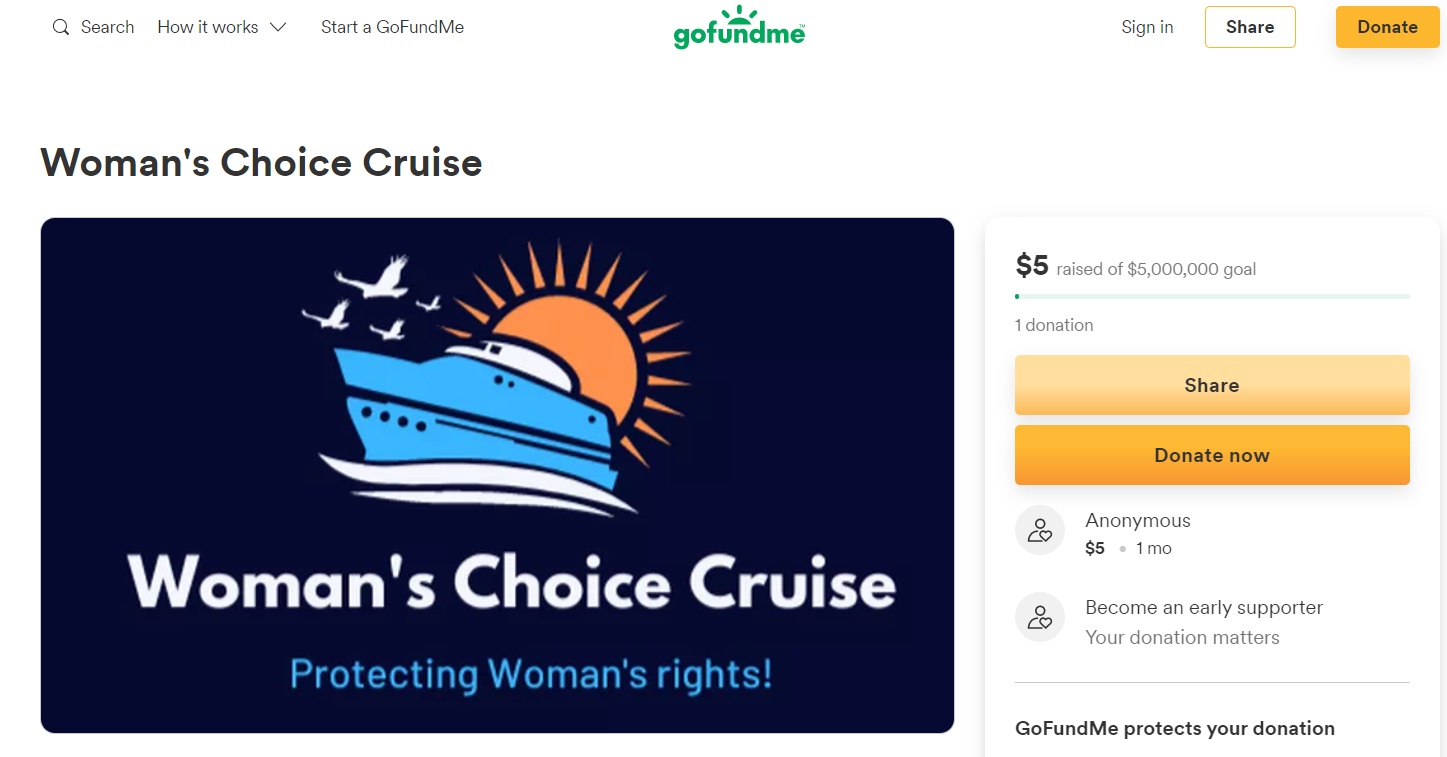