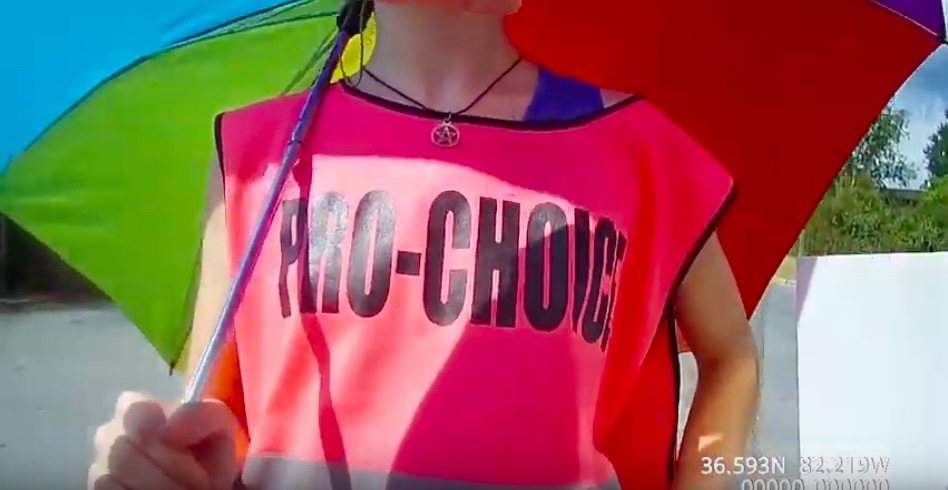 Thomas More Society Senior Counsel Martin Cannon, who represents Schanzenbach, pointed out that she has changed the dates and times she visits the facility, specifically to avoid her assailants.

“These defendants have stepped beyond the limits of both civility and the law in their attempt to shut-down pro-life speech. Erika Schanzenbach is peacefully exercising her First Amendment rights to speak against abortion and advocate for life-affirming alternatives,” Thomas More Society Counsel Michael McHale said. “The Skeens and Hanzlik have engaged in and bragged online about their abusive, threatening, and illegal conduct. Their so named, ‘Pink Manifesto,’ states that they will ‘use any means necessary’ ‘whether legal or not’ to physically block pro-life witnesses. Their hostile and belligerent conduct cannot be allowed to continue unchecked. The court must protect Ms. Schanzenbach and hold these women accountable for their criminal actions.”

02/14/2020:Erika Schanzenbach, a pro-life sidewalk counselor, is fighting back after facing repeated assaults and harassment from abortion activists and escorts in Tennessee. Numerous videos filmed outside of Bristol Regional Women’s Center show Schanzenbach being threatened, harassed, and assaulted, some of which Live Action News has previously reported. Now, the Thomas More Society has stepped in, seeking orders of protection that would allow Schanzenbach and other pro-lifers to peacefully protest without having to face this kind of behavior.

One video provided by the Thomas More Society showed Schanzenbach warning two abortion escorts not to touch her or her sign; the escorts, however, ignored her. “Make me stop!” one of the escorts taunted. “You need to stop talking to patients.” The other remained close by Schanzenbach’s side as she repeatedly told them to back off and stop touching her. A male escort joined the other two women, yelling at Schanzenbach to shut up as she told them to leave her alone.

One of the escorts also repeatedly licked Schanzenbach’s hand as she held it up to block the escort. When Schanzenbach told the escort to stop, the escort said, “Call the cops!” They also followed her every time she tried to move away.

A second video showed Schanzenbach once again targeted, as the abortion escort pressed against her, uttering profanities as Schanzenbach told them to get away. The first escort began laughing gleefully when a second escort approached. The pair followed Schanzenbach as she tried to walk away, ignoring Schanzenbach’s request for them to refrain from touching her. “What does she f***ing expect?” one of the escorts said, later again taunting Schanzenbach to call the police. The escorts also stole pamphlets from Schanzenbach and threw them on the ground. When another pro-lifer tried to pick up the pamphlets, one of the escorts tried to steal them from him. Meanwhile, other escorts could be seen in the background yelling in the faces of other sidewalk counselors. They also further taunted Schanzenbach, saying, “This is what happens when you don’t bring bodyguards!”

“These actions are blatantly illegal, and they are unacceptable in a civilized society,” Thomas More Society Counsel Michael McHale said in a statement provided to Live Action News. “Everyone has the right to peacefully advocate their beliefs on public streets and sidewalks without being bullied into silence. While we continue to ask local authorities to stop this illegal abuse, we are eager to help Ms. Schanzenbach secure some measure of relief in civil court.”

The escorts belong to a group known as “Pro-Choice Bristol,” which published a “pink manifesto.” In it, the escorts said they would use “any means necessary” to keep sidewalk counselors from reaching patients.

Denise Skeen, Alethea Skeen, Rowan Skeen, and Cheryl Hanzlik have all been named in pro-lifers’ petitions for court orders of protection. Additional complaints have been filed against Hanzlik and Alethea Skeen for ongoing illegal harassment. “Ms. Schanzenbach has been terrorized while exercising her freedom to peacefully express her opinion,” McHale said. “She has been stalked, threatened, and frightened, while attempting to share life-affirming alternatives with abortion-minded women – something that she is fully within her Constitutional rights to do,” he added. “We expect the court to protect Ms. Schanzenbach to the full extent of the law.”

The facility where this harassment has been taking place is reportedly known for its hostility towards pro-lifers. Previously, sidewalk counselors there were threatened with a loaded gun; in another incident there, an abortionist was arrested for pointing a loaded gun at pro-lifers, one of whom was a minor.

An intentional act which threatens, intimidates, or causes someone to fear physical harm, is the legal definition of assault. Touching or striking someone without their permission is legally considered battery. These escorts have done all of the above; however, it seems police have been unwilling to take action against the escorts in the past.