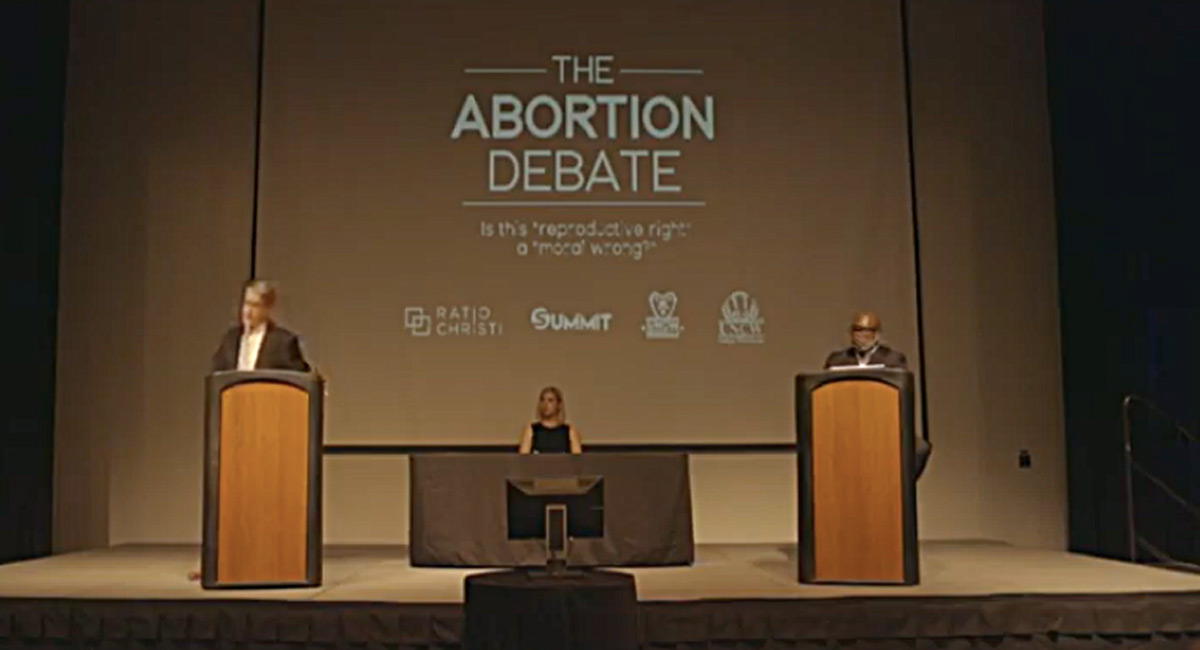 Last week, UNCW professor Dr. Mike Adams took on self-professed “Christian” abortionist Dr. Willie Parker on the campus of the University of North Carolina-Wilmington. The debate lasted nearly two hours — but it truly only took about 20 minutes for Adams to clarify the pro-life position in such a way that made Dr. Parker’s comments thereafter seem unconvincing to many.

Using the science of human life against the abortionist

Adams used his opening 20 minutes to clearly point out, using embryology and even video evidence, that the preborn entity in the womb is indeed a human being. “My first premise is that it is wrong to intentionally kill an innocent human being. My minor premise is that abortion does intentionally kill an innocent human being… and my conclusion is that therefore, abortion is wrong,” Adams said. Adams pointed out that it is not vague when life begins, nor is it something strictly religious in nature. We should consult the science of embryology, he said, effectively pointing out how Parker, in his autobiography, “Life’s Work,” contradicts embryology.

On page 145 of his book, Parker states, according to Adams: “As a Christian and a scientist I can authoritatively attest” that life does not begin at conception. Adams also stated that Parker claims human life between 22 and 25 weeks of pregnancy — though viable — is “in a vague state.” Parker, however, admits to committing abortions up to 25 weeks — after his own pronounced standard of viability. Adams pointed out that Parker “kills people for a living by his own standard.” Parker makes all of his claims about human life, said Adams, with zero footnotes or end notes in his book.

At around 27:50 in the debate, Adams displayed a short video featuring images of abortion victims. It’s difficult to argue with the images of early and late-term abortions, all of which show identifiable body parts.

However, even Parker has his limits, says Adams. Parker refuses to do sex-selective or race-based abortions. And yet, Adams noted, Parker exchanges those two forms of discrimination for three: size, level of development, and degree of dependency.

Dr. Willie Parker’s opening 20 minutes were quite different — notably lacking in scientific facts (for example, Parker stated that he believes life is a continuum that begins before conception, since a sperm is alive). “My motto in life is to first seek to understand, and then to be understood,” Parker said, giving his reason for participating in the debate.

Parker claims to be a Christian, calling Dr. Adams “my brother” in the spiritual sense. “I, too, am a Christian, so I understand from the inside where the passion and the drive to live to your convictions comes from…. [R]ather than being mortal enemies… it’s more of a sibling argument,” about killing human beings in abortion, Parker claimed. Parker claimed Adams used science, philosophy, religion, and the law to conflate terms with “different implications.” He spent some time discussing how the terminology people use in debate are often different from each other. In an odd illustration, Parker claimed that it’s “biologically implausible” for God to have created man before woman as stated in the biblical creation account, explaining that men come from women’s vaginas, yet the Bible says woman came from man’s rib. His arguments, for the entirety of the debate — if they could be called arguments — were largely incoherent and difficult to follow.

Parker went on to state that people can have both a biological understanding and a religious understanding of when life begins, which he seemed to say were both subject to each person’s individual conscience on the issue — a point he continued to reiterate throughout the debate.

Parker attempted to justify his decision to become an abortionist by saying it was the parable of the Good Samaritan from the Bible that motivated him. In response, Adams said he found this idea offensive, adding that the Good Samaritan didn’t slit the man’s throat and dismember him.

Adams eventually got Parker to admit that yes, abortion kills human beings, and that he has killed tens of thousands of human beings in his life’s work. In the video clip below, courtesy of Created Equal, abortionist Willie Parker states that he concedes Adams’ points:

Adams asks how many human beings Parker has intentionally killed in the course of his career, and Parker says, “I don’t know… uh… twenty thousand. Thirty thousand. What’s the difference?” The difference, said Adams, is about ten thousand human beings. However, Parker made clear at one point that he believes that abortion is killing, but not all killing is murder. This reveals how Parker justifies his abortion “work” by using special “terminology” with “different implications,” as he referred to earlier in the debate.

Watch the debate in full here, including the Q&A in which an abortion supporter in the audience predictably accused pro-lifers of not caring about children after they’re born: