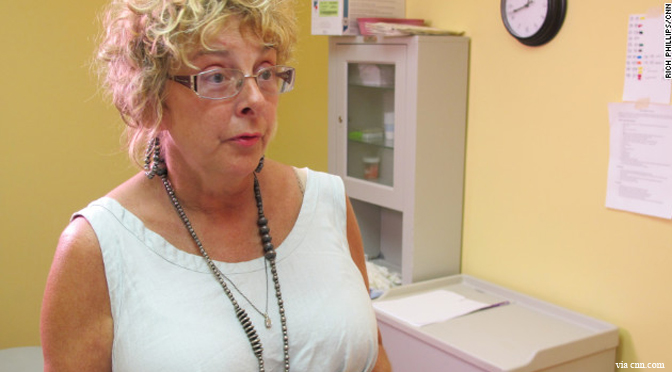 Diane Derzis, owner of the only abortion clinic in Mississippi, was on “The Alan Colmes Show” defending abortion and complaining about laws requiring abortionists to have admitting privileges. She says many interesting things in the video, some of which I’ll address in future articles. As you can see in this video of Colmes’ radio show, he is a very sympathetic interviewer. He lobs Derzis softball question after softball question, setting her up to spout the typical pro-abortion rhetoric. For example, Colmes makes sure to maneuver Derzis into saying that regulations requiring clinics to meet basic health standards and hire abortionists with admitting privileges have nothing to do with women’s health – it’s just those nasty, evil anti-choicers trying to take women’s rights away. And, of course, he makes sure to bring up the horrors of self-induced and illegal back alley abortions that were allegedly rampant before Roe v. Wade (even though much of that has been debunked and, in fact, the former medical director of Planned Parenthood wrote in 1960 that the 90% of all illegal abortions were performed by “licensed physicians… in good standing” and that “abortion, whether therapeutic or illegal, is in the main no longer dangerous”).

Yet despite the fact that Colmes handles Derzis with kid gloves, there is one major surprise in the interview. Things get strange when the subject turns to Planned Parenthood.

Colmes: Are there Planned Parenthood facilities where you are? Do they exist in Mississippi? What is their relationship to clinics like yours?”

Derzis: The Planned Parenthood in Mississippi does not do abortions. They do – we actually do not have a relationship.…

This prompts Colmes to launch into the typical defense of Planned Parenthood that we’ve all heard so many times:

Then Derzis says is something that shocks Colmes and probably all of the program’s pro-choice listeners as well.

Colmes: I guess I’m surprised to hear that.

Derzis: I know it, because everyone else goes along with the, what we’re supposed to say, and the PC thing, and I’m just-

So here we have an admission that Planned Parenthood is mostly about abortion – something that pro-lifers have been saying all along. We already know statistically that they do the majority of abortions  in the US (around 40%), now we have it straight from the mouth of another abortion provider.  Planned Parenthood, according to Derzis, is all about abortion.

Derzis is not the only abortion provider to compare abortion to Walmart.

For example, Peter Bours, a physician in Oregon, reports that new Planned Parenthood franchises in his area are making one of his offices financially untenable; whereas he has once provided 100 or more abortions per month in his Portland office, he now performs around 20. Referring to Planned Parenthood as “the Wal-Mart of abortion clinics,” Bours contends that the larger providers offer inferior services, and that as a result women are being poorly served by the expansion of the organization in abortion provision.

Although very competitive in terms of price, Bours maintains that their level of care is lower, and that patients often see clinicians with less training than physicians at smaller facilities might have.

One gets an idea of mass-produced products; substandard abortion procedures and clinics which process woman after woman, giving them abortions and sending them on the way.

Faltering, Colmes tries to get the interview back on familiar ground, attempting again to defend Planned Parenthood.

Colmes: But as I understand it, because of the Hyde Amendment, they can’t, federal dollars don’t go to Planned Parenthood for abortions.

Colmes: But what I don’t understand is, in many communities, Planned Parenthood is the only place women have to go, why would you want money taken away from them since many women –

In just a few minutes, Derzis has blown a hole through all of the propaganda surrounding Planned Parenthood. Her candor shows that:

2. The 3% statistic is misleading, and

Prolifers knew this all along, of course. But it’s nice to see the facts verified by an unexpected source.

And, just in case there are any doubts about Derzis’ pro-abortion credentials (doubts which would seem impossible to have after seeing the video) she says:

I thank God every day I had an abortion. I am not ashamed of that. I have no problem talking about it.