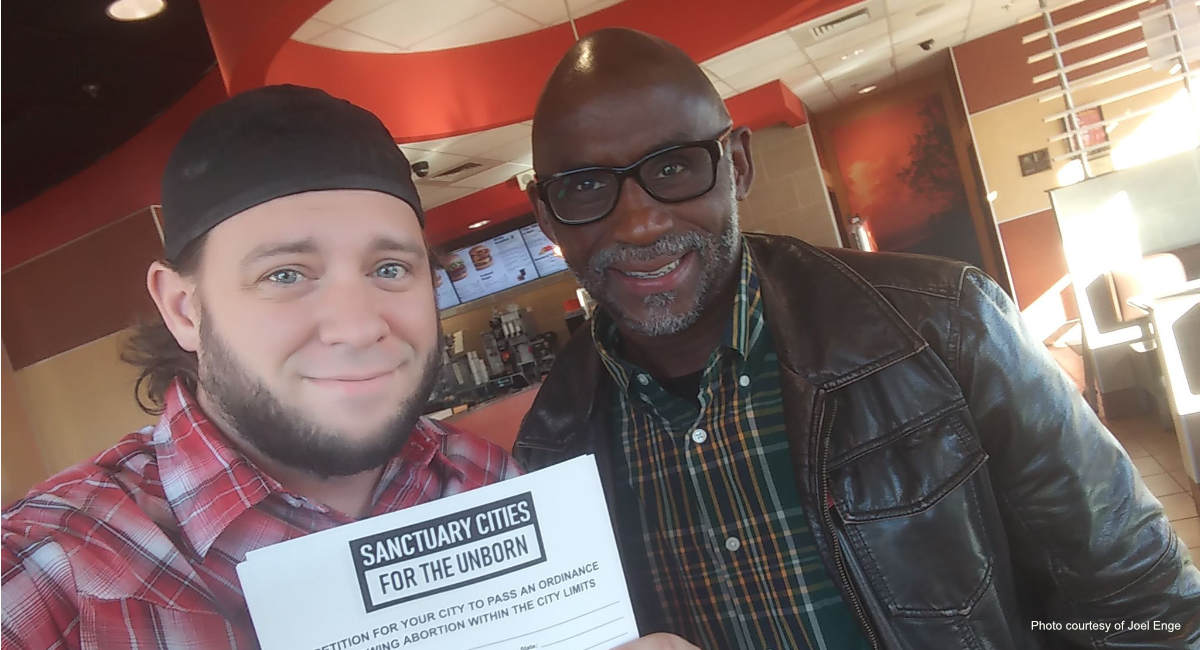 Joel Enge is living proof that a single changed mind and a single transformed heart can have a powerful impact on the lives of countless others. He currently runs Kingdom Life Academy, a faith-based school dedicated to renewing the lives of troubled middle and high school students by equipping them with the practical and spiritual skills they need to have meaningful futures. He also works with Mark Lee Dickson in the Sanctuary Cities for the Unborn movement.

But abortion was not always an issue Enge cared about. “I knew it was wrong. But it was not on my radar,” he told Live Action News.

His journey toward involvement in the pro-life movement began after his college graduation. He had always been a straight-ticket voting Democrat. However, the pastor at his church “was an anomaly. He taught from a biblical perspective, [even] politically. Which is a big issue because … Black Christians blindingly, overwhelmingly vote Democrat,” Enge explained. “But he was not one to do that. He realized he had to stay with the conservative camp.” Under this pastor’s tutelage, Enge’s perspective shifted.

“But even then,” Enge recollected, “when Obama was running, I was drawn to the fact that finally, a Black president was possible. And I knew that, biblically, … I could not vote for him in the general election. [But] I [was] entertaining the possibility of voting for him in the primary.”

However, a seemingly random occurrence was to change all of that. “In late January, I went to the grocery store to buy a loaf of bread. And all of a sudden, I heard this baby scream,” Enge told Live Action News. Disturbed, he went in search of the child to check on her, and found her a few aisles over with her mother.

“She was okay. Her mom was taking care of her. But I wasn’t okay. … I go to the cashier to pay for my bread, and I’m grieving, I mean, I am just messed up. It was all I could do to hold back the tears,” he said. “I make my purchase then hurry to my truck. I get in my truck and I just break. I’m weeping uncontrollably, almost hyperventilating. And finally I catch my breath. I’m like, “God, what’s wrong with me? Why do I feel like somebody died?” And He said, “Son, they have. The pain that you feel, the grief that you feel, is mine – from the millions of babies that have been killed.”

Enge went home and began to research abortion. “I just wept as I sat before my computer monitor,” he recalled. “I found out about Black genocide, I found out about Planned Parenthood, Margaret Sanger, all of it.”

He also learned more about Obama’s record on abortion.“I found his speech to Planned Parenthood in 2008, when he said if he was elected … he was gonna ensure that [the ban on] partial birth abortion would be reversed. And that there would be no limits on abortion at all. And I was sick.”

Enge and a local pastor both felt they had to speak up, so the Sunday before the general election, they made a presentation to the congregation. “I created a Powerpoint with all the information I had from the CDC. At that time we’d killed over 13 million, just from the African-American [community]. … We talked about the Democratic party and how … they are pro-abortion. And [we asked], how can we continue to stand for that?”

Enge faced immediate backlash – a “furious defense” of the Democratic party and a vicious attack against the alleged racism of the Republican party. Driving home afterward, he asked God, “Lord, what is wrong with us?” The scripture 2 Kings 17:17 – a verse he had never before read – came to him, and he looked it up when he got home. It read, “They sacrificed their sons and daughters in the fire. They practiced divination and sought omens and sold themselves to do evil in the eyes of the LORD, arousing his anger.”

He proceeded to read further back into verse 16: “They forsook all the commands of the LORD their God and made for themselves two idols cast in the shape of calves, and an Asherah pole. They bowed down to all the starry hosts, and they worshiped Baal.”

And so what the Lord was saying to me, is that we have made an idol. And the major idol is our Blackness. … When you stir the pot and throw the bone out to us about racism, we are like piranhas, we will fight, fight, fight, but at the same time … we don’t care about the thousands and thousands of Blacks that are murdered by other Black people every year. We are so caught up in this blindness, and there’s such a darkness. … You know, there was a movie, “Sleeping With the Enemy.” That’s what we’re doing. We are in bed with the enemy.

Enge continued to stand up for his beliefs in his community, often at the expense of friendships and even financial support for his school. And just as often as he has faced anger and pushback, he has been met with abject apathy. He said:

I found Maafa 21. …  And I bought these DVDs and I gave them to various Black pastors. I think … that it’s going to wake up our community, wake up the church. Hmm-mm. They won’t even watch it. … I just felt hopeless. I got this burden that I can’t shake. And I’m carrying it for years.

Then, Enge received an unexpected answer to his prayers – a way to make a significant impact in the fight for life. He told Live Action News:

[A]t the beginning of [the] Sanctuary Cities [for the Unborn movement] back in early 2020, I ended up reaching out to [Mark Lee Dickson], and I met with him on a Sunday. I thought, “Okay, this is something that I can really connect with, and help with.” … [T]hat night … I saw Mark in this dream. And it was like the movie “Ten Commandments” when Aaron and Joshua were putting blood on the door mantels. I saw Mark doing the same thing with the cities.

… I don’t claim to be a prophet or anything, but I just sensed that there’s some kind of judgment coming, and [for the] cities who pass this ordinance, there’s going to be some form of protection. And that’s when I knew, this is my doorway opportunity. And I feel like the Lord told me, “Any time you can be supporting this brother and this work, you do it. You do it.”

Enge helps by sharing his story and interfacing with city council members, getting petitions out, and doing what he describes as “grunt work” – whatever needs doing – to get the ordinances passed.

One mind changed. One heart transformed. Only God knows how many lives will be saved.

There are now 44 cities which have passed ordinances outlawing abortion in three states, and more are in the works. If you would like to make your city a sanctuary city, visit the organization’s website to find out how.