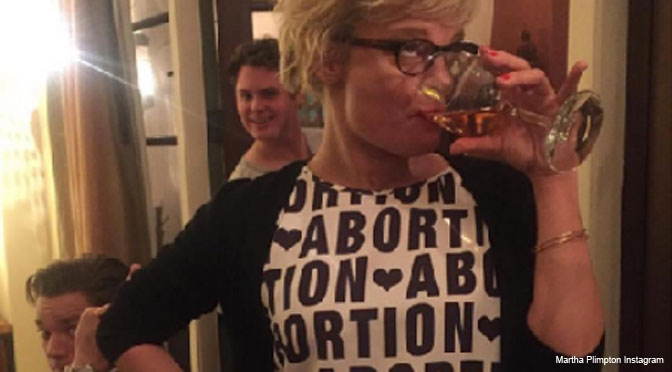 As I began my morning at our pregnancy center a young woman walked in and approached me. “I’m here because I need an abortion,” she said.  I took her into my office to listen to her story. She was terrified to find herself pregnant.  Although challenging factors pushed her towards abortion, she confessed to not really wanting one.

“I think it’s satanic,” she said. When I asked why she replied, “It just seems like millions of women killing their children is something the devil would want.”

She was like many women I’ve encountered. She felt abortion was her only option, yet in the deepest part of her soul, she hated it.

After I got home from work, I scrolled through Facebook and saw a truly disturbing picture. The pro-abortion news site RH Reality Check posted an image of actress Martha Plimpton wearing a dress covered with lots of hearts and the word ‘abortion’ in bold font throughout the design. (I’m not exactly sure where someone would wear that dress. Work would be inappropriate, church wouldn’t work so well and the grocery store could be an option but you’d have plenty of stares.)

Regardless of the dress’s lack of class or versatility, a number of women in the comment section wanted one, stating, “I want this dress” and “where can I buy that dress?”

But at least one pro-choice woman was disgusted  by the dress, stating:

I had an abortion and support a woman’s right to privacy, and thus choice. That being said, abortion is a serious choice, and not a fashion commodity. Flippant attitudes about abortion undermine the gravity of that decision, and why it is so important it be protected, and only bolster anti-choice advocates’ attitudes that pro-choicer’s are casual about the whole thing. This dress is really disturbing, and as someone who is thankful she had the choice, pretty insulting. My choice is not a cutsie fashion statement.

I have to admit I’m partly glad RH Reality Check posted that picture, because I want women to see how  pro-abortion activists want them to think.

Some pro-choice women see abortion as a serious decision that shouldn’t be taken lightly. Many people still hold on to the old “abortion should be safe, legal and rare” slogan. However it’s important for women to know that many abortion activists don’t want abortion to be seen as a tragic or difficult choice. They want abortion to be seen as a path to happiness, freedom and prosperity. Plimpton’s abortion dress is in your face and without apology because that is how many abortion activists view the choice to terminate children – including Plimpton herself, who admits to aborting two of her babies. It’s the ‘say it loud, say it proud, I aborted my baby’ mentality. In an attempt to destigmatize abortion, activists are pushing others to love it. In a recent ABC nightlife report, the creator of the Twitter hashtag #shoutyourabortion read a letter from a woman who told her having an abortion made her happy in a totally “unqualified way.” Not every women views abortion as a sad choice they make in desperation, but truth be told, most women I work with at our pregnancy center do see it that way. The issue is that the activists who are guiding the national discussion would rather they not.

Pro-choice news sites tell women to wear their abortions literally on their sleeves because it’s as inconsequential as a fashion choice. And  the pro-choice medical community at large dismisses the thousands of women that suffer from post-abortion stress syndrome. In a world that seeks to be sensitive to the conditions and pain of others, countless post-abortive women are told their pain is abnormal and inconsequential.

I think back to my conversation with that young woman seeking an abortion. “I know millions of women do it, so it’s like, normal, but it just seems wrong,” she said. I’ve talked with women who are almost afraid to admit they think it would be wrong to abort, because everyone around them says they shouldn’t care. A woman once told me, “When I called Planned Parenthood, the person on the other end of the phone was just so casual. I guess she should be that way because it’s her job and all, but it just didn’t feel right. I don’t know, shouldn’t it be more important than that?”

Yes, I believe it should. Abortion activists can continue using slogans and fashion statements to dehumanize pre-born children and manipulate women into believing abortion’s just another choice to lead them to happiness. I will keep telling the truth that abortion takes the life of a unique human being and that injustice deserves our sorrow.