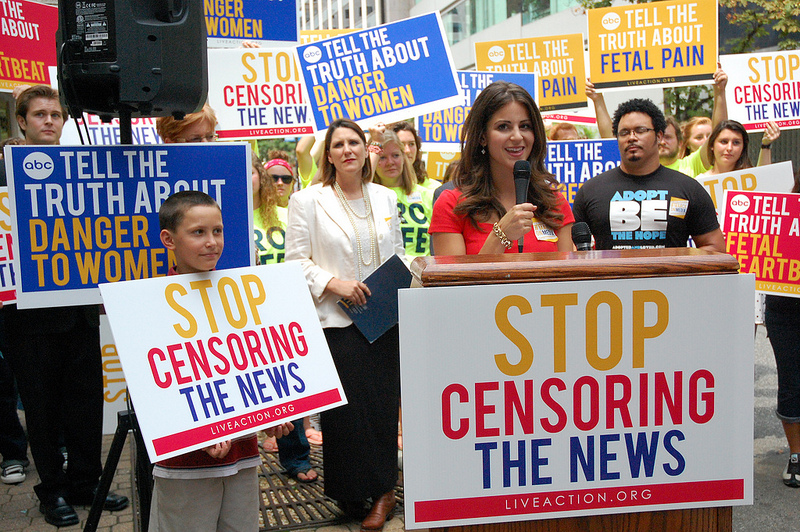 Our March on Media rally took place this past Thursday. We had upwards of a hundred and fifty people gathered outside ABC, including a you-can’t-miss-’em crowd of yellow shirts from the ever-awesome Crossroads USA. 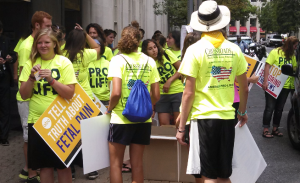 Four speakers took to the mic to demand decent, fact-based reporting on abortion, mentioning such ridiculousness as ABC’s outsized coverage of Wendy Davis versus Kermit Gosnell, the total blackout of Live Action’s Inhuman investigation, and ABC’s shrug of the shoulders at Planned Parenthood’s defrauding of the poor.

I want to be very clear about this: ABC had a crowd of activists literally outside their window, raking them across the coals for their appalling bias in reporting the facts on abortion. All of DeSales Street was echoing with our speakers’ voices; heck, ABC staff were looking out the window at us. 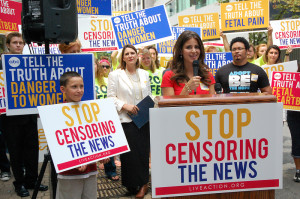 “Not to draw too much attention to you, Sir, but we do have an ABC camera here.”

So what have the folks at ABC said in their own defense? Well…nothing.

Three days later, not a word out of these guys. 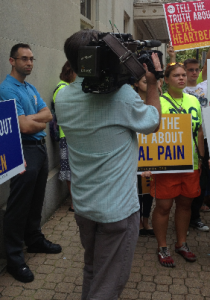 Maybe we shouldn’t be surprised, considering that ABC saw fit to avoid the Kermit Gosnell trial until 56 days in. But on the other hand, the network that considered spine-severing Gosnell unworthy of coverage can’t say the same of Live Action’s rally, because they sent a camera man out to cover us. In fact, our own Lila Rose noticed the gentleman and called him out: “We’ll see if ABC is actually going to be airing any of this footage. That’ll be yet another test to see if they’re reporting the news, because this is the first time something like this has been done.”

(Admittedly, Live Action should have known better; as we’ve seen in the past, the real way to get ABC to cover you is to launch a snow-cone war.)

ABC’s reporting priorities have been a wreck for a long time, especially when it comes to abortion. That’s why we held our March on Media rally in the first place. But now we’ve directly called out an ABC cameraman filming us, right outside ABC’s Washington headquarters – and the network’s pretending that nothing happened.

I don’t know about you, but this is some of the loudest silence I’ve ever heard.