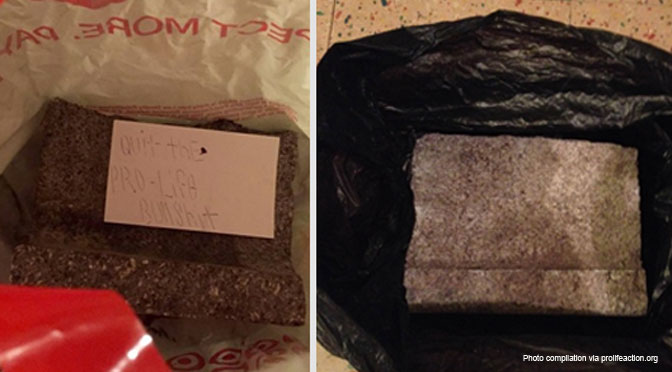 John Jansen, staff member of the Pro-Life Action League, has reported that his home was vandalized on January 28 in the same way as was right to life advocate Jill Stanek’s home.

After Jansen had left for work that morning, his wife Jocelyn discovered that cinder blocks had been thrown through their basement windows, wrapped in a plastic bag.

Jansen wrote about the incident, saying that his wife immediately called police who inquired if the couple knew if anyone was angry with them.

Initially, it was unclear if the incident was directly related to Mr. Jansen’s pro-life work; however, when the Jansens learned of the similar vandalism at Stanek’s home, they realized it was likely an attack by the same pro-abortion person or group.

Stanek, the national campaign chair for the Susan B. Anthony List, returned home from vacation on January 30 to find a cinder block in a plastic bag had been thrown through a window in her home. The cinder block was accompanied by a note which read: “Quit the Pro-Life Bull****.”

The cinder blocks from both attacks are similar in size and structure.

The Jansens and Stanek all say they will not be intimidated or frightened by these incidents, noting that compared to what pre-born aborted babies suffer, a broken window is minor.

“Make no mistake, having our home attacked is unsettling, and replacing a couple of windows will involve some cost and inconvenience, but at the end of the day, it’s a small price to pay for the sake of our unborn brothers and sisters,” wrote Jansen.