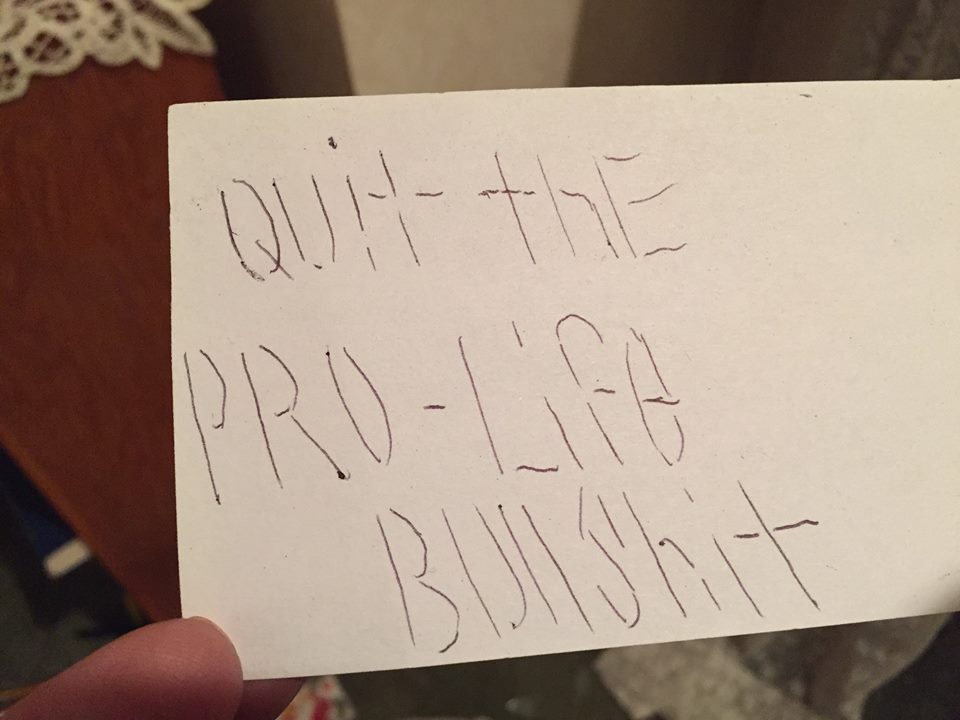 Pro-life stalwart Jill Stanek has reported that she returned home from a family vacation to find her home vandalized. A brick had been thrown through her window, with a note ordering her to “Quit the pro-life bulls**t.” Stanek, who worked as a registered nurse for years, first became known to the pro-life movement when she revealed that babies who survived abortions at her hospital were left to die. She has spoken to Congress, as well as many groups, telling the stories of these babies – including one she held and rocked until he died.

I could not bear the thought of this suffering child dying alone in a Soiled Utility Room, so I cradled and rocked him for the 45 minutes that he lived. He was 21 to 22 weeks old, weighed about ½ pound, and was about 10 inches long. He was too weak to move very much, expending any energy he had trying to breathe.

Toward the end he was so quiet that I couldn’t tell if he was still alive unless I held him up to the light to see if his heart was still beating through his chest wall. After he was pronounced dead, we folded his little arms across his chest, wrapped him in a tiny shroud, and carried him to the hospital morgue where all of our dead patients are taken.

Stanek also ran the number one pro-life blog in the nation until she accepted a position with Susan B. Anthony List, as its National Campaign Chair. She still writes on her blog, as time allows.

For about six months, Jill has been traveling the country, working to build support for Susan B. Anthony List’s aggressive campaign strategy to elect a pro-life president this year and advance legislation like the Pain-Capable Unborn Child Protection Act, which would stop after five months.

Of the vandalism she just experienced, Stanek writes:

“In the scheme of things this was nothing. But having my home vandalized was a first for me in the ‪#‎prolife‬ movement. We came home from vacation last night to a broken window and a plastic bag with a large piece of cinder block inside and a message. As if they thought this would make me stop? The police suggested not publicizing, but I said I wasn’t going to let ‪#‎prochoiceviolence‬ go unchecked.”

Police are filing a report, calling this “biased” vandalism. Just before they took the brick away for evidence, Jill asked if she could have it back. One policeman was rather surprised, asking, “For what, a trophy?” Ever the dedicated go-getter, Jill replied, “Yes, actually.” Completely undeterred by the violence and threats of abortion supporters (which seems to be on the rise), Jill wrote: “The brick landed on my devotional table (inside plastic bag). Love that for some reason.” She informed SBA List that she would “be back at my desk tomorrow! More on fire than ever!”