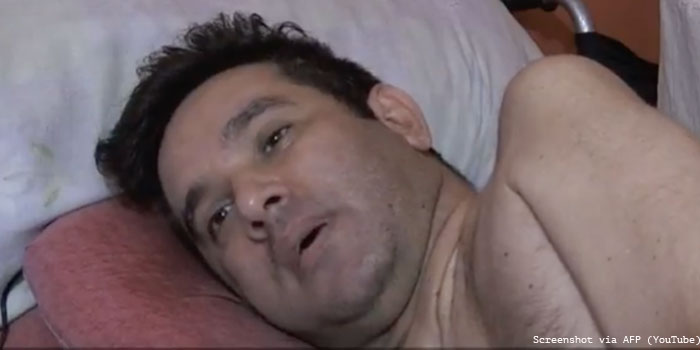 A Venezuelan quadriplegic man has posted a video on YouTube, begging Nicolas Maduro to allow him to undergo euthanasia. Marco Guillen lives in Cabudare and is 45 years old. He was injured in a traffic accident 12 years ago, and now cannot move his arms or legs — and according to this video, he wants to die.

In the video, Guillen explains why he wants to be euthanized — and it’s clear that it’s not because he actually wants to die. “There is a serious situation in the country, I’m no economist, I don’t know if there’s an economic battle but the truth is that when someone goes out to look for something I need, whether it’s food or medical supplies the high cost of living makes me run out of strength,” he said. “I do not want to burden my family, or my daughter or my wife, with the poor life I lead.”

“As many people will tell you, many neighbours, my mother died because of me, from taking care of me,” he added. He explained that his medical bills amount to more than his monthly pension. Despite the cost of his medical care, however, his wife Ana says that he is “valuable” to their family. She doesn’t want him to kill himself, promising that she will always take care of him.

Guillen’s plea for euthanasia isn’t a death wish. It’s a cry for help.

The current economic situation in Venezuela is deplorable; people are desperate and starving, which undoubtedly makes Guillen’s situation even more difficult. But what Guillen needs is help, and better resources. He admitted that he doesn’t want to die, but to live in better conditions. It is his desperation and fear that is causing him to seek out death. And it’s the same situation most people seeking out assisted suicide are in.

Guillen is an example of this; in his own words, he doesn’t want to die. He wants a better quality of life, which admittedly will be difficult somewhere like Venezuela. But dying isn’t the answer to his problem. Dying won’t make his family members’ lives better.

Of course, assisted suicide advocacy groups would never acknowledge this, nor would they work to help give people a better qualify of life before resorting to euthanasia. They just argue that people like Guillen should be allowed to die a “dignified” death if they want to — as if Guillen’s life, and the lives of people like him, is “undignified” somehow — and ignore the root of the problem. But legalizing assisted suicide isn’t just unfair to people like Guillen, it’s also unfair to the medical staffers who have to be complicit in their deaths.

Palliative care nurse AnnMarie Hosie penned an essay on why she opposes assisted suicide. “If euthanasia were legalised, how should a nurse react if a person expresses a suicidal intent, or commits suicide, especially someone with a terminal illness? Preventing suicide is an integral responsibility of healthcare as governments are fully aware,” she said. “A nurse (indeed, any healthcare professional) who recognizes that a patient is suicidal is expected to intervene for their safety and to maintain life, guided, in New South Wales, by Suicide Risk Assessment and Management Protocols. Nurses have a responsibility to act to protect the life of a person who has attempted suicide, and to report suicide deaths to the Coroner. Both ‘voluntary assisted’ death and suicide mean the same thing: to intentionally end one’s own life. If euthanasia were legal, some laws and some healthcare policies would clash.”

She continued, noting, “People eligible for assisted suicide, according to the NSW Voluntary Assisted Dying Bill (like similar bills in other states), must have a terminal illness. It’s natural to assume that many of them will be receiving palliative care. How would nurses effectively and ethically care for someone according to these two opposed approaches? How easily would the lines become blurred between ethical palliative care and intentionally causing someone’s death?”

Hosie also argued that, despite the common claim that assisted suicide is like drifting peacefully off to sleep, it isn’t. “Nurses who provide palliative care frequently give patients medications for symptom management like pain, breathlessness and anxiety, using many of the same medications that are commonly used for euthanasia such as benzodiazepines and opioids. These medications can cause distressing side-effects even at therapeutic doses — dizziness, dry mouth, nausea, vomiting, irritability, hallucinations, and delirium,” she explained. “Delirium is an acute disturbance of awareness and cognition; it is a frightening, humiliating and isolating experience. Some people have described it as ‘hellish’. Unconsciousness may not make a person unaware of delirium, only unable to verbally communicate the experience. Not everyone will be delirious during natural dying, but he or she almost certainly would be while dying of a lethal dose of medication.” She pointed out that during euthanasia and capital punishments, there are numerous complications that are not uncommon: “cardiac arrhythmias, difficulty accessing a vein, gasping, jerking, seizures, regurgitation of ingested medication, and longer than anticipated duration of dying.”

She concluded by explaining that assisted suicide, despite what lobbyists say, is not truly a merciful option. “Euthanasia… twists the real meaning of mercy,” she said. “Mercy is inspired by love and compassion, and informed by reason. Mercy requires us to use our strengths to do everything possible for the well-being of another person. Mercy… fulfills the purpose of healthcare to restore human dignity during sickness.”

“When we care for people in their natural dying and see the unexpected good that can happen during such difficulties, our own fear about death can ease. We become better at bringing peace and hope to others who are frightened about dying. As a palliative care nurse, I can honestly say I don’t fear dying or death. But I would have reason to fear being old and sick if I lived in a place where euthanasia was legal,” she concluded. “Rather than an effective way of relieving suffering, legal euthanasia would cause increased confusion and harm, both for and by nurses. My hope is that we will continue to aim high and strive always for merciful nursing and healthcare, and a merciful society.”

Marco Guillen, and people like him, deserve better than euthanasia. When someone is desperate and scared, they deserve help — not to have their fears substantiated, and not to be given a death sentence.