In May 2012, after I had been writing for Live Action News for just a few short months, I did a piece on Lacey and her son Christian. I still recall sitting in my university library, tears coming to my eyes, as I watched the video of Lacey describing her pregnancy, about Christian, and most of all the love for her son, who was born without eyes, as they did not develop, and a clef palate, all while some of my favorite Christian songs played in the background. 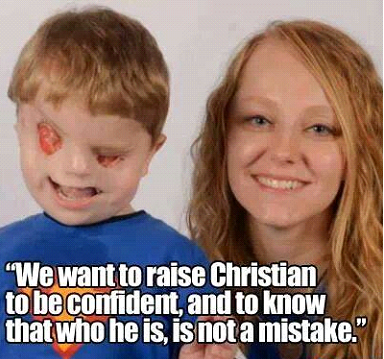 Lauren Enriquez also did a piece on Lacey and Christian in June 2013.

LifeNews.com has featured the family many times on their website, including articles from this year. This piece includes a video clip and write-up from a local Fox station. It mentions that Christian’s favorite sound is his fingers hitting piano keys and that he is now an older brother.

And an article from the site by Josh Brahm was posted earlier this week with a stunning and inspiring update on the Buchanan family. Christian has been getting reconstructive surgery! Brahm brings up two posts from Lacey’s blog about Christian, “Leading the Blind.”

In a post from August 2013, she explains that her son will not be having cosmetic surgery because she loves him and finds him to be perfect just the way he is.

Lacey discusses setting the record straight for doctors (and anyone else) that she is still allowing for Christian to have necessary, reconstructive surgeries, but not cosmetic ones. Earlier in this post she described doctors wanting to perform eight hour neurosurgery, complete with a warning of the graphic procedure.

And Lacey perfectly sums up her point about perfection and “fitting in” with her conclusion of that post:

The truth is, no one is “perfect.” We all have our own flaws. The secret isn’t to get them fixed or hide them, it’s to learn to love those imperfect things about yourself. The truth is also that there is no such thing as “normal.” Who gets to decide what normal is, anyways? Ask two different people and you will get two completely different answers. In a world that screams “Fit in,” I want Christian to know that it’s okay to stand out!

In her post from May 23, aptly titled “Miracle at 705 Riley Street,” Lacey describes the sixth surgery Christian underwent, which was for his cleft palate. Lacey had been understandably nervous about how the surgeries for her son would go, especially with the great risks involved.

In this post Lacey refers many times to the “miracle” of Christian making it through his surgeries. Here is how she describes this miracle surgery, touching upon her own faith and its involvement:

But God knew what lay ahead for Christian long before it ever happened, and His plans are good and His plans are not persuaded by my fears. Thank God that He understands my weakness and when I struggle with my faith, He isn’t angry with me. He just restores and strengthens my faith instead.

Lacey knows that there are necessary surgeries for her son to undergo, and would not deny them to him. But she also knows that Christian does not need to be made more normal looking as some would maybe describe, for him to be seen as special and be loved.

The featured image for this article, which is from Lacey and Christian’s Facebook page, also contains a point which rings so very true.

Lauren Enriquez wrote her piece on Lacey and Christian touching upon criticisms not only Lacey has received, but others who chose to give their disabled children life. And surely there are other examples we may not know about, which occur every day, as people who may look or act differently are not treated with the respect they deserve as human beings, and their families thus also suffer this prejudice. The strong resolve of Christian’s family is a testament that each one of us may have our imperfections, but that we are all deserving of love, life, and respect.