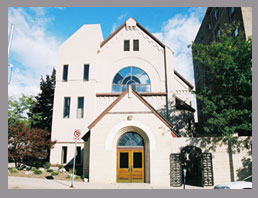 Evil out, good in.

Prior to the inception of the 40 Days for Life Campaign in 2004, David had committed to visit a pregnancy resource center in Grand Rapids, Michigan. When he arrived at the airport, he was picked up by the director of the center, Jim Sprague. Jim invited David to come with him to downtown Grand Rapids to show him something that he said could be life-changing. They arrived at 72 Ransom Avenue, at a large, old building that David said looked like a church. They went inside to meet the owners, and David was about to learn the history of the building.

The building was over 200 years old and had started out as a Jewish synagogue. Later it became a Greek Orthodox Church. After both religious groups had outgrown the building, an investment group purchased the building and turned it into a commercial property. A notorious abortionist leased the building in 1994, ten years prior to David’s visit. It became the Heritage Clinic for Women, and it was the largest abortion facility in the area. While in business, the facility saw the deaths of 20,000 children.

Prayer warriors in the area met regularly to pray that the building would be “reclaimed for God,” and in 1999, the building was put up for sale. Pro-lifers tried to acquire the building but faced many challenges. For four years they continued to pray but were met time and again with obstacles. During this time, they formed LIFE International, a ministry aimed at opening pregnancy resource centers all over the world. In 2003, the group finally had enough money to purchase the building. The abortionist was kicked out of the building, and immediately LIFE International turned the facility into their world headquarters.

Here’s what the leaders of LIFE International told David Bereit they found upon acquiring the building:

In the entryway was a stairwell going up as well as down. I was told that when a women would come in for an abortion, frequently she would have a boyfriend, family member, or someone else along with her. They would send her downstairs and the support person upstairs. They didn’t want to take the risk that the support person might persuade the pregnant woman to not go through with the abortion, which would cost them several hundred dollars of lost revenue.

At the bottom of the steep stairs, the pregnant woman was directed into a waiting room filled with beautiful, padded couches. After filling out her paperwork, she would sit with other women on a couch to quietly wait for her abortion appointment.

What she didn’t know was what was in the very next room.

When the door into the next room was opened, I was stunned. Years earlier, parts of the ceiling had collapsed from water damage, and since nothing had ever been repaired, there was a strong smell of rot and mildew. Cockroaches scattered across the floor as we stepped in. This was literally a foot away, through the wall, from where the women sat while they waited for their abortions. I recoiled at the thought of such conditions in a facility providing surgical procedures.

We walked into the next room down the hall – the main “procedure” room, where the majority of the abortions were performed. Most of the surgical equipment had been removed, but since abortions had been performed there until shortly before my arrival, there was still a large rectangle of dried blood and rust marking where the surgical table had been attached to the worn linoleum floor.

The abortion suction machine had been removed from the wall, but I could see mold where it had been attached. There were a few surgical tools on the counter that had been left exactly as they were on the last day of abortions, mere days before – unsterilized and showing signs of rust.

I asked, “What is that indentation on the floor – that arc worn into the linoleum?”

My guide said, “That’s where the abortionist stood, at the foot of the surgical table, moving back and forth extracting, often in pieces, the thousands of children who died in this room.”

Chills ran down my spine.

Then they took me to the final room in that downstairs hallway – the recovery room where the women were sent to recuperate after the abortions. As I took in the dismal room, I couldn’t help but think that by the time the women arrived here, the abortion business had already gotten everything it wanted from these “clients” – the procedure was over, and they’d paid their money. What must they have felt as they stepped into that last miserable room to sit on these old, rotted chairs with their stained seats? My host explained that here the abortion staff would give each woman a little cup of juice and a cookie, then just leave her to fend for herself. When she felt ready, she would stand and walk out – possibly without any companion at all.

David recounted his amazement at the fact that several days before his arrival, children were dying in this building at 72 Ransom Ave. in Grand Rapids, which was now completely dedicated to saving lives and helping women. “On that day,” he said, “I faced the reality that we are engaged in an epic struggle between good and evil, between light and darkness, between heaven and hell. This is a spiritual battle.”

To illustrate the truth of that statement, David continues the chapter telling the story of a spiritual battle that ensued shortly after LIFE International took possession of the building. He recounts that five days after the last abortion ever committed in that building, the organization gathered one hundred twenty-five religious leaders to come and pray over the building. Every room was prayed in, and the building was rededicated to God. A few days later, nine LIFE International board members were meeting to continue to reclaim the building for God through prayer, and one of them suggested starting their prayers where the abortionist would start his day: downstairs in the back hall at the large metal door that opened to the alley where the abortionist parked his car. They prayed fervently, and with their leader’s “Amen,” the steel door which had been locked burst open and and slammed into the alley wall. The prayer warriors felt a gust of wind go out, and then a light breeze came in. The group realized that their prayers had forced evil out of the building.

Shortly after this occurrence, a local woman came by and asked what had happened to “the strong man.” Not knowing what she was talking about, the worker asked her for more details. “You know,” she said. “The statue of the muscular, demonic figure that used to be perched on the roof. I walk by here all the time, and I always see it. It’s not there today. What happened to it?” But there never was such a statue. The woman, completely serious, insisted that there had been a demonic figure perched on the roof and that it was no longer there.