Information collected from Florida abortion providers reveals that as abortions appear to be on the rise in the state, 27 babies were reported as born alive during abortions between 2015 and August 2020 in the state. Four of the 27 were born alive in 2020.

The information is compiled in the report, “ITOP Report of Infants Born Alive, Florida,” on file at the Agency for Health Care Administration (AHCA). According to a spokesperson from the AHCA, ITOP stands for “Induced Termination of Pregnancy.” A previous Live Action News report noted that that four babies were reported to have been born alive after abortions in 2015, with none in 2016. Eleven babies survived abortion attempts in 2017, six in 2018, and two in 2019.

What happened to these abortion survivors is unclear, as no additional information was given.

However, testimony from a Planned Parenthood representative delivered at the Florida Legislature in 2013 made it clear that abortion businesses refuse to guarantee that they will attempt to provide medical care to infants who survive abortions:

State reports previously listed the counties involved; however, the state no longer publishes this information. Live Action News previously reviewed data from 2015,  2017, and part of 2018 when some information by county was available, but reports have since been updated to exclude this information. The decision to withhold county information can thwart potential investigations into the treatment and care of the infants required under federal law. 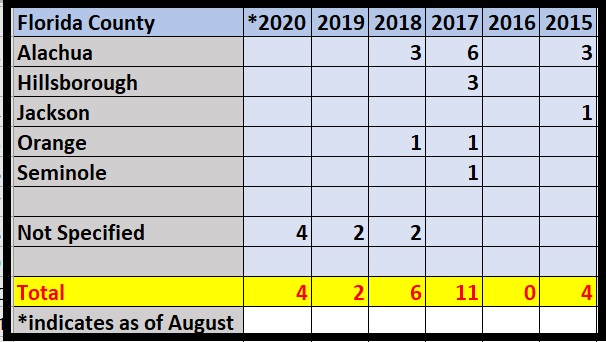 Thanks to committed pro-life sidewalk counselors and pregnancy resource centers in the state, thousands of preborn children and their mothers continued to be rescued from abortion. New Life Solutions in Largo, Florida, recently shared on Facebook that its ministry “has seen over 10k babies saved” since 1985, “as well as thousands more women and families who have been served and whose lives have been radically transformed.”