Yesterday, December 15, 2020, marked 25 years since the Minnesota Supreme Court required Minnesota to publicly fund abortions at the taxpayer’s expense. Since that day, taxpaying citizens of Minnesota have paid abortionists about $27 million to kill more than 90,000 preborn children — abortions that may not have happened otherwise.

In 1994, a Minnesota District Judge struck down a law that prohibited state Medicaid funding for elective abortions. The Minnesota Supreme Court upheld that ruling on December 15, 1995, in Doe v. Gomez.

“Most people, even many who favor legalized abortion, oppose using tax dollars to pay for elective abortions,” said Scott Fischbach, Executive Director of MCCL, Minnesota’s largest pro-life organization. “Minnesotans and their elected representatives in the Legislature never agreed to this policy. It was imposed by the courts with no basis in the state Constitution. And the result? Disastrous harm to unborn children, taxpayers, and low-income women and families who deserve so much better.”

According to MCCL, Gomez argued that there is a “right” to abortion in the Minnesota Constitution, and if the state Medicaid program covers childbirth it must also cover abortion. That ruling means that even if Roe v. Wade were to be overturned, there would still be taxpayer-funded elective abortions in Minnesota. 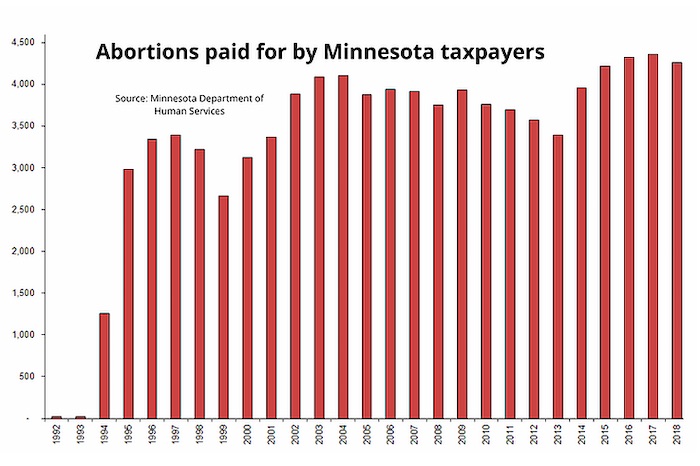 In 2018, the latest year for which data is available, taxpayers in Minnesota paid for 4,256 abortions at a cost of $1.03 million, and 2,723 of those abortions were committed at Planned Parenthood businesses. There are currently four Planned Parenthood centers in the state that commit abortions.

Research shows that women who use state-funded health insurance do not want Medicaid to cover abortion. In addition, the pro-abortion Guttmacher Institute found that public funding of abortion increases the number of abortions that would have otherwise taken place.

“[W]hen you make abortion free [of cost to the client], you’re adding to that encouragement. You’re encouraging abortion when you make it free because, just in general, that’s a sales tactic, making something free,” pro-life advocate Christina Bennett told Live Action News regarding Medicaid-funded abortion. “If something is free you’re going to consider it regardless of what it is. If someone says, ‘Do you want this? It’s free.” You’re going to think, ‘Do I want this?’ So, for women who are already vulnerable, already under pressure to abort, it becomes this enticement.”

“Minnesota’s tax-funded abortion policy isn’t only unjust to the unborn children who are killed with public money, as if such killing were a public good,” said Fischbach. “It’s also harmful to the economically vulnerable women to whom Planned Parenthood offers ‘free’ abortions, driving up the group’s abortion numbers and revenue. And it’s unfair to Minnesota taxpayers, who shouldn’t have to pay for this.”

The federal government is currently reviewing whether or not the Hyde Amendment, which prevents federal funds from paying for abortions of women on Medicaid, should be undone. President-elect Joe Biden once supported the Hyde Amendment but during his 2020 presidential campaign, he said he now opposes it. Getting rid of Hyde will push low-income women into abortions they don’t want and cause the unnecessary and violent deaths of preborn children simply because of their mother’s lower economic status.
“Like” Live Action News on Facebook for more pro-life news and commentary!