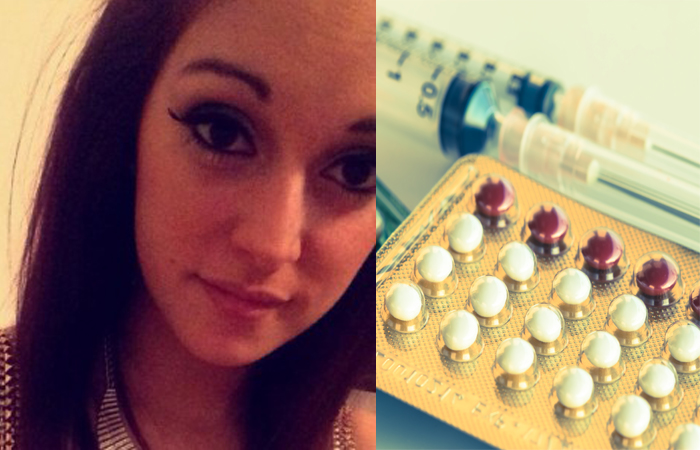 Twenty-one-year-old Fallan Kurek died of a pulmonary embolism, caused by a birth control pill – Rigevidon – that she had been taking for less than a month. Tragically, Kurek had been directed by her doctor to take the pill solely for the purpose of regulating her period.

She had been taking the medication for just 25 days when she collapsed at home in Tamworth, Staffordshire.

Paramedics rushed to her house after she began vomiting – but minutes later she stopped breathing and turned blue.

…[T]ragically, after three days in intensive care, she was pronounced brain dead.

She passed away just hours later on Thursday May 14, surrounded by her loved ones.

Her cause of death was recorded as pulmonary embolism (blood clot) on her lung.

Kurek’s chest pain had been checked out at a hospital four days prior to her collapse. Sadly, her pain was dismissed and the cause went unrecognized. It seems medical professionals did not ask if Kurek was taking any form of birth control until she was already on a ventilator.

At that point, staff at the hospital realized that she was likely suffering from a blood clot, but the damage had already been done. Kurek’s parents question why they were not informed of the danger of blood clots. This danger is three times higher among women who are on hormonal birth control pills than among women who are not.

Despite this fact, a spokesman from the U.K.’s Medicines and Healthcare products Regulatory Agency says that “the benefits of any combined hormonal contraceptive far outweigh the risk of serious side effects.” Yet this begs the question of whether a triple risk of possible death is truly worth a regulated period – especially when other options are available, though perhaps not as quick of a “fix.” Kurek’s parents hope that telling their daughter’s story can bring attention to the real risks of birth control pills.

Mr and Mrs Kurek also hope that medical professionals will take more time to explain serious side effects to all women, not just those in high risk groups, such as smokers or overweight women.

‘They know the pill can cause blood clots,’ said Mr Kurek. ‘We can’t bring her back, all we can do is maybe save another life.’

Even Cosmopolitan agrees that Kurek’s story is both terribly sad and scary for women:

If you think an unplanned pregnancy or an irregular period is scary, this should put things in perspective: 21-year-old Australian Fallan Kurek recently died from taking birth control pills, which triggered a lung blood clot and heart inflammation, reports Birmingham Mail. She’d only been on the pill for 25 days.

Hannah McCann, another young woman, is speaking out about the dangers of birth control pills after suffering from a blood clot herself:

Hannah McCann said she was the “lucky one” after reading about the death of 21-year-old Fallan Kurek from Staffordshire in England who suffered a fatal blood clot after she was prescribed the same contraceptive pill. …

Hannah, also 21, was prescribed Rigevidon in December to regulate her periods after being diagnosed with Polycystic Ovary Syndrome in October last year.

Just 21 days after starting to take the contraceptive pill, Hannah fell ill and doctors discovered she had a blood clot on the brain. She said doctors have since told her Rigevidon was the most likely cause of the clot.

Now the East Belfast student is speaking out to warn other women about the possibility of dangerous side effects of the contraceptive pill. …

In January 2014, Vanity Fair released an expose on the Nuva Ring, another non-pill form of hormonal birth control. Devastating results have been discovered in women using the Nuva Ring, too – including death from pulmonary embolisms.

While hormonal birth control is known to act by stripping the lining of a woman’s uterus, sometimes causing early miscarriages, it is also undoubtedly dangerous to women themselves.

It’s high time women were given the complete facts about hormonal birth control (including hormonal and copper IUDs). They need to be aware of what can truly happen: the ending of the lives of their preborn babies as well as damage and destruction to their own bodies.