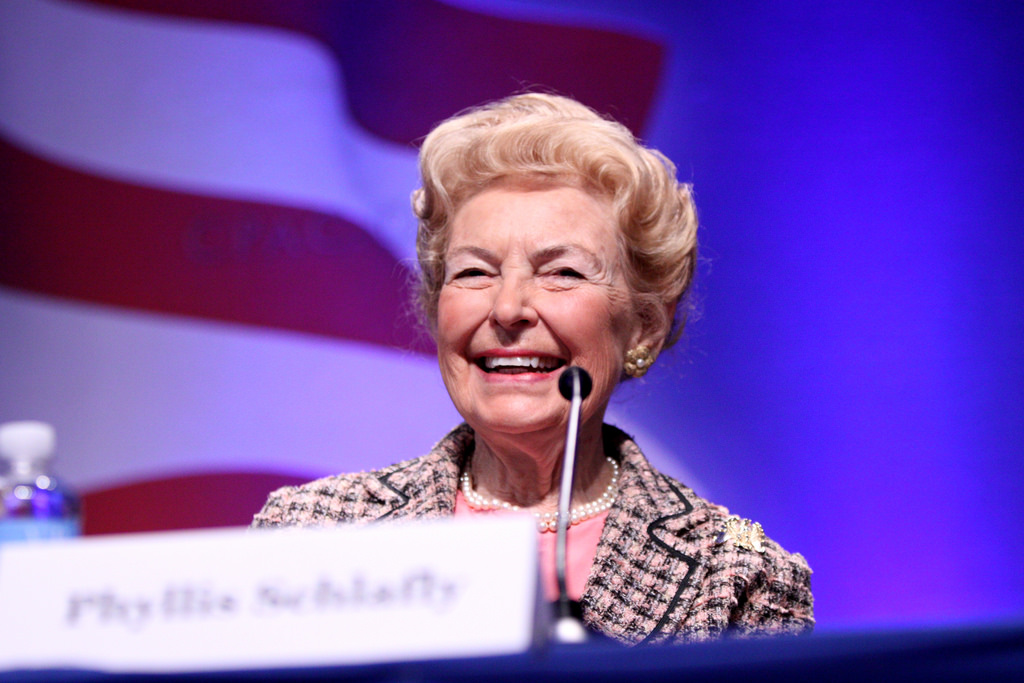 On Monday, Eagle Forum founder Phyllis Schlafly died at age 92. Though she spent decades as a leading activist for a wide range of conservative political causes, pro-lifers in particular owe her gratitude and remembrance for her work in defense of preborn babies.

Students for Life of America president Kristan Hawkins hailed Schlafly’s work, dating back to the earliest days of abortion as a national controversy in the United States, as not only “inspir[ing] millions to the fight against abortion,” but also as “the reason the Republican Party is a pro-life party.”

When the Supreme Court first imposed abortion-on-demand upon the nation, there were no clearly defined party positions on abortion, with supporters and opponents on both sides. Modern radical feminism soon ensured that many legislators would abandon their former pro-life stances; without the political pressure and mobilization organized by leaders like Schlafly, there may not have been any meaningful opposition to it.

In 1998, Schlafly wrote the following regarding Roe’s twentieth anniversary:

Roe’s grabbing of legislative powers away from the democratic process, and Roe’s creation of new “rights” out of words in the U.S. Constitution that were never so intended, are the vehicles of moral relativism and modern liberalism. The Court overturned democratically passed initiatives (term limits and gay rights), and invented new rights in a wide variety of areas from welfare, to jobs, to prisons and schools.

The Supreme Court recognized Roe’s overriding significance in Planned Parenthood v. Casey (1992). When the Justices worried that overturning Roe would “undermine” the Court’s “legitimacy,” maybe they were really worrying about undermining the Court’s grabbing of extra-judicial powers that can be used in such wide-ranging future cases as assisted suicide, cloning, English as our official language, and immigration.

In that column, she also had prophetic warnings for those politicians tempted to compromise on the defense of human life:

When the abortion lobby accuses Republicans of having a “litmus test” on abortion, it reminds us of the thief who cries “Stop, thief” to distract attention from his thievery. The evidence is unmistakable that the only one who uses a litmus test is Bill Clinton, who reliably appoints only Supreme Court Justices committed to keeping Roe intact.

Now the Party needs national spokesmen and candidates who can confidently articulate why constitutional government and moral decency require that Roe v. Wade be overturned. If they don’t, Republicans will look timid when up against the Democrats’ unrelenting and passionate commitment to retain it.

However, Schlafly’s greatest contribution to the pro-life cause was her key role in defeating the so-called Equal Rights Amendment to the United States Constitution.

Ostensibly a simple declaration that “equality of rights under the law shall not be denied or abridged by the United States of by any state on account of sex,” the ERA was actually meant to give the Constitution language broad enough that activist judges could interpret it as not merely cementing a right to abortion, but a right to taxpayer-funding for one’s abortion, as well.

Schlafly understood that judicial overreach was the only reason for declaring an “equality of rights” without specifying, as amendments like the 13th or 19th did, precisely what right was being ensured. Sure enough, subsequent pro-life efforts to call ERA advocates’ bluff and amend it with abortion-neutral language were met with suspicious resistance — and pro-lifers’ fears were further vindicated when NARAL and Planned Parenthood sued before the New Mexico Supreme Court on behalf of the interpretation that the ERA did mean taxpayer-funded abortions.

It’s not a stretch to say that without Phyllis Schlafly, pro-lifers today might be facing a world where tax-subsidized abortion-on-demand was even more intractably embedded in American law, and without more than a handful of people representing our cause in elected office. Thank God she stood and fought; in her memory, let’s redouble our efforts to do the same.