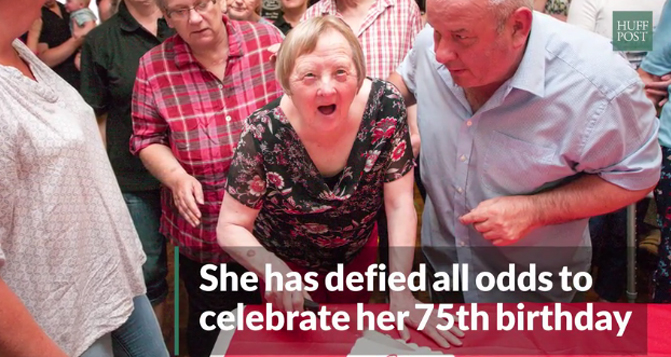 Frances Gillett, believed to be the oldest woman in the world with Down syndrome, celebrated her 75th birthday on July 31. When she was born, she wasn’t expected to live beyond her 20s.

“Frances is really and truly amazing and over the years she has become more than a resident, she is like family,” said Wayne Bent, who owns the care home where Gillett lives. “Years ago there was zero expectancy for someone with Down syndrome to live such a long life, so for her to celebrate her 75th birthday is wonderful.”

Not only has Gillett beaten the odds against her because of Down syndrome, she has also battled breast cancer and tuberculosis, and won. She lived with her parents in Soham, England, until she was in her 60s, moving to a residential home just 10 years ago. Her caretakers say she loves music and needlework.

Dollie Grissom, age 74 from Oklahoma, is the second oldest woman with Down syndrome; and Joe Sanderson from Cleveland, Lancashire is believed to be the oldest male. He turned 80 in March. Bert Holbrook of Minnesota likely lived the longest with Down syndrome. He died in 2012 after 83 years of life.

Gillett spent her milestone birthday with friends and family at a surprise party, where she received numerous gifts and cards to honor her life.