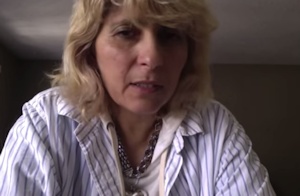 The media doesn’t often share with us the stories of women who live in regret and depression every day because of abortion. Many simply don’t come forward with their painful stories, however there are at least hundreds of post-abortive women who want the world, especially other women facing crisis pregnancies, to know that abortion will not fix their problems, only worsen them. Sue is one of those women.

In the video, which she titled Sue’s Abortion, Sue talks about her family’s history with abortion including her grandmother’s death during an abortion, and her father’s suicide because of the pain that followed after losing his mother. Sue was only 10 when she saw her father put a gun to his head, decades after abortion killed his mother.

Then Sue, years later, discovered she was pregnant. Her boyfriend pressured her to abort. With nowhere else to turn, Sue gave into the pressure and let her boyfriend drive her to an abortion clinic. She says that she suppressed her emotions regarding the abortion. Confused, angry and unable to connect with her boyfriend, she ended their relationship and moved on with her life.

It wasn’t until she was married and pregnant that the remorse of her abortion flooded her. She says:

When I had my child, I was starting to have nightmares where that child was speaking to me and I could see him in the light, but there was another child in the darkness that was trying to speak but couldn’t. And um, I would wake up just terrified at what I had done to my first baby.

Sue lived with the nightmares, raising her son and trying to live a normal life but the regret of her abortion crept into her life. Every day she lives with the truth of her abortion and the fears that she failed her baby. She worries about what she will say should she see her aborted child after she dies. She explains:

Much later on the trauma really come to the surface and it took me years after dealing with so much pain and so much… I was just devastated and the devastation came to the surface. And I just had to deal with that day by day trying to live with the notion that one day after I die I might meet that child and I wouldn’t know how to explain to him that I didn’t protect him. I was the only person on the face of the earth who could have protected him and instead I had them chop him to pieces and throw him in the garbage. I didn’t even give him a decent burial. And I guess I will live with that as long as I live. That’s the one thing haunting me.

Sue isn’t alone when she says she’s haunted by her abortion. Countless brave women have come forward with the truth in an effort to help other women chose life for their babies. Hopefully, their messages will be spread far and wide and help save the unborn children at risk for abortion.