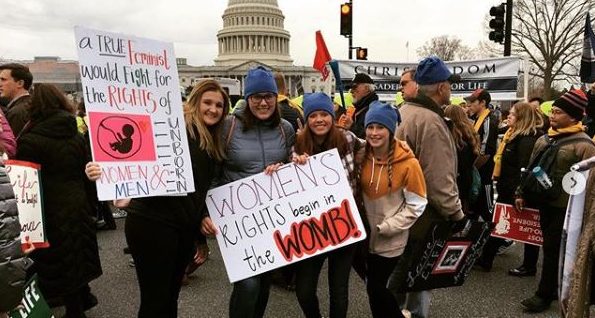 Tens of thousands (one estimate says over 225,000) of pro-lifers from across the country marched on Washington, D.C., on Friday to stand up for the right to life for preborn human beings. The 2020 March for Life takes place 47 years after the Supreme Court legalized abortion in the United States in the Roe v. Wade decision, and remembers the 60 million innocent lives lost since that day. The theme for this year’s March is “Life Empowers: Pro-Life is Pro-Woman.”

“2020 is the centennial anniversary of the 19th amendment which gave women the right to vote in the United States, and so that is, in large part, why we chose it because when we look back to the early suffragists, by in large they were all pro-life and they had some amazing things to say about women’s capacity for motherhood,” March for Life President Jeanne Mancini told EWTN Pro-life Weekly host Catherine Hadro. “And so we’re taking this year and specifically the March for Life to delve into those roots. And… also to answer some confusing questions on what it means to be pro-woman today where we’ve got a presidential election where so many of the candidates say that to be pro-woman you have to be pro-choice. We want to present the truth onto that backdrop.”

The pro-woman theme for this year’s March helped to highlight not only the large number of women who lead the pro-life movement but the women who have been directly affected by abortion. This includes abortion survivors Claire Culwell and Melissa Ohden who spoke at the March and gave a face to the 60 million children killed by abortion and those who have survived abortion as well.

Some notable pro-life Democrat women spoke at the March as well, including Louisiana First Lady Donna Hutto Edwards and Senator Katrina Jackson of Louisiana. Jackson will be speaking to the Supreme Court in regard to Act 620, a law she signed which places the same regulations on abortionists as other outpatient doctors.

“We hope, one day, just like Louisiana, Congress will have Democrats and Republicans as we fight (for life),” said Jackson. “So Louisiana – and this nation – is fighting in unity for life because it’s so important to let people know everywhere that the fight for life doesn’t have a partisan stance to it, but that we love babies.”

Trump told the crowd on Friday, “Young people are the heart of the March for Life, and it’s your generation that is making America the pro-family, pro-life nation. The life movement is led by strong women, amazing faith leaders, and brave students who carry on the legacy of pioneers before us who fought to raise the conscience of our nation and uphold the rights of our citizens.”

“For 47 years, the March for Life has demanded that our leaders in Washington protect all life under the law,” she said in a statement. “This year, with President Trump becoming the first sitting president to address the March, we have never been more assured our message is being heard loud and clear. As the pro-life movement works to change hearts and minds, we are looking for more elected leaders to follow the President’s lead by making the passage of pro-life policies a top priority.”