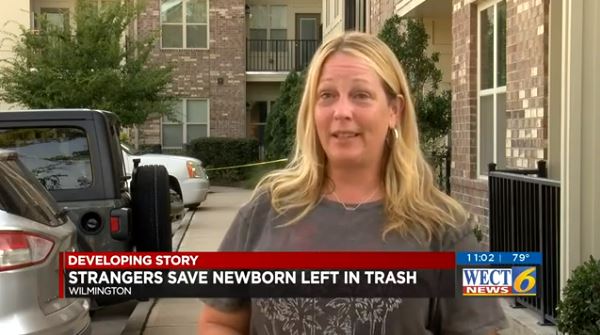 A newborn baby boy was found in a trash bin in Wilmington, North Carolina, on Thursday evening, alive and with his umbilical cord around his neck. A woman discovered the baby and began yelling for help, which is when Tamara Austin, who heard the woman from her apartment, stepped in.

“She said she found it in a dumpster across the street,” Austin told WKYT. “She was on the phone with 911 when I came out. The baby was breathing. He was obviously a newborn, very recent.”

Austin and the other woman worked with dispatchers to provide the baby boy with any help and comfort they could as they waited for paramedics to arrive. “He still had his umbilical cord around his neck,” said Austin. “The 911 operator told us to take it from around his neck, which it wasn’t tight, and I just held him and cleared his airways with a towel and I just held him.”

Austin began praying and the other woman began singing “Jesus Loves Me” to the boy. Austin told the baby that “someone here wants you.”

“I was praying and talking to him,” she said through tears. “I said, ‘Hang in there, little man, we have help coming for you, and God has a purpose for you.’ He actually grabbed my pinky finger when I said that. So, that was very heartwarming to say the least.”

At about 7:30 that evening, the Wilmington Police Department tweeted that the baby is healthy and is doing well.

As with many states, North Carolina has a safe haven law. Parents can surrender an infant under seven days old to a designated safe haven location with no questions asked and no penalty or arrest. Designated locations include hospitals, health departments, community health centers, police and sheriff departments, social services departments, and fire or emergency stations.

Every child is wanted by someone, even if his or her parents are unable to provide care.

Editor’s Note: For further information on the status of this baby, please contact the local authorities in Wilmington, North Carolina.