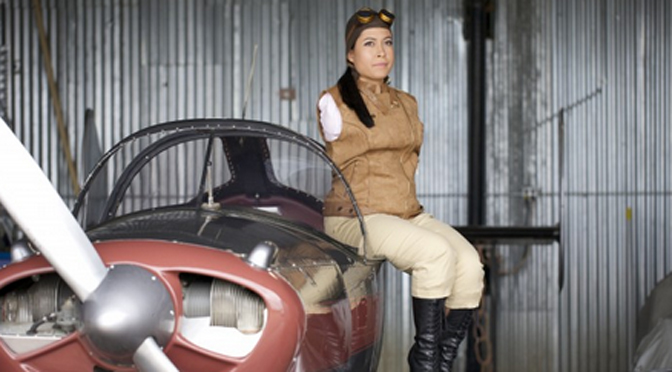 When Jessica Cox was born 32 years ago, her parents and the entire medical staff were shocked by a disability that they failed to see on the ultrasounds. Cox didn’t have any hands or arms. As she was delivered via C-section, a silence fell over the room. No one had ever noticed the missing limbs until the day of her birth.

“Unfortunately I think it was a little bit discouraging, especially with the doctor who was there who didn’t provide much support,” said Cox. “Mom was told I could get prosthetic arms and that inspired her to know that I could have a normal life.”

But Cox hasn’t led a normal life. She’s lead an extraordinary life of athletics, traveling, and piloting airplanes. As a child, Cox’s mother Inez told her she could do anything she wanted to and assured her daughter that God had a plan for her. Her father William never shed a single tear over his daughter’s supposed disability, and taught her to never see herself as a victim. These pictures are property of Jessica Cox Motivational Services and may not be used without permission.
Please direct questions to Patrick Chamberlain at admin@rightfooted.com.

Cox lived without arms until the age of three, when she was fitted with prosthetics that she wore for 11 years, when she decided she was better off without them.

“I went to age three without them,” she explains, “and used my feet during those very critical years. I adapted to the world. My feet were my hands. [Prosthetics] felt like a foreign thing to me. They were thick, heavy, and made of plastic. I didn’t have the tactile function I had with my feet.”

Growing up, Cox faced challenges, the biggest she said, were learning how to get dressed and being seen as someone who is different. She had to learn confidence, and her parents helped her with that by enrolling her in activities any child would be doing – plus some. Cox took swimming lessons, joined the Girl Scouts, danced for 14 years, modeled, bowled, and did Tae Kwon Do. Each of these helped increase her confidence. The more she accomplished, the more activities she wanted to try.

Along with her brother Jason and her sister Jackie, Cox had chores to do, and she was disciplined just the same as her siblings. She does however believe that because of her differences, she needed more attention than her siblings and her parents gave it to her.

Motivated by a desire to be adventurous, Cox set out to try anything that had yet to be done by someone without arms or hands. If it required ingenuity, she found excitement in taking on the challenge.

“Whenever someone doubts that it can be done without arms, that motivates me,” said Cox. “The doubts of others are turned into a more positive force for me. It’s just my personality. I can’t sit still.” These pictures are property of Jessica Cox Motivational Services and may not be used without permission.
Please direct questions to Patrick Chamberlain at admin@rightfooted.com.

Cox has built a long list of accomplishments over the years. She’s a motivational speaker, traveling the world to inspire others. She’s the first pilot without arms, an accomplishment she is most proud of especially since she had a fear of flying. Cox was even awarded a medal at the Guinness World Record Show for this triumph, which she presented to Pope Benedict.

“I asked him for a couple of prayers for my mom who was battling cancer and for my brother who was considering becoming a priest,” said Cox. “He said he would. It was a special moment to be able to meet Pope Benedict. It meant a lot to me and it was my way of showing gratitude for all the blessings in my life. I truly feel blessed.”

At age 19, Cox met her mentor, a woman who was also born without arms and who was married with children. Cox saw that this woman could change diapers and take care of her son and it inspired her to seek that same life for herself.

Three years ago she married Patrick, whom she met through Tae Kwon Do. These pictures are property of Jessica Cox Motivational Services and may not be used without permission. Please direct questions to Patrick Chamberlain at admin@rightfooted.com.

Cox recently completed her book Disarm Your Limits, and a documentary about her life is being shown at film festivals around the world, even earning the title of best documentary at its very first showing at the Vatican. The documentary follows Cox and her husband from their wedding to a trip to Ethiopia where she spoke about inclusive education, and on to the Philippines after the super typhoon hit. Over all, the couple traveled through three different countries and numerous states advocating for people with disabilities.

A recent photo of Cox greeting a little girl without arms named Ruth Evelyn, nicknamed RE, went viral.  RE had been telling her mother that she wanted arms, so her mother drove RE six hours to meet Cox to see that she could live a normal, happy life without arms. “I’m giving her a hug [in the photo],” said Cox. “That has touched so many people and I hope it can do the same mission that I am trying to do – letting parents know that their child will be just fine.”

Her documentary, Right Footed, is set to play at the Portland Film Festival during the first week of September. It should become available for wider viewing in about a year.

One thing Cox wants parents and children with disabilities to remember is that it’s important to always have a positive outlook, even when doubters are trying to hold you back. Upon seeing RE, a little girl asked her mom why the other girl didn’t have arms. When that happens, says Cox, it’s important to not be offended.

“Respond in a confident, positive manner and in that confidence RE will be able to see that nothing is wrong with her,” Cox told RE’s mom. “She’s just different, but everyone’s different. It not only makes it easier for the person asking the question, but for everyone involved. It teaches others that being different is okay. We’re all born different. That was the most important thing I could say. Those public encounters are very critical in responding in a positive, uplifting manner.”

While her movie is playing and her book is debuting, Cox already has her sights set on her next adventure: learning to drive a race car. And judging by her track record, you can bet she will be successful at that as well.