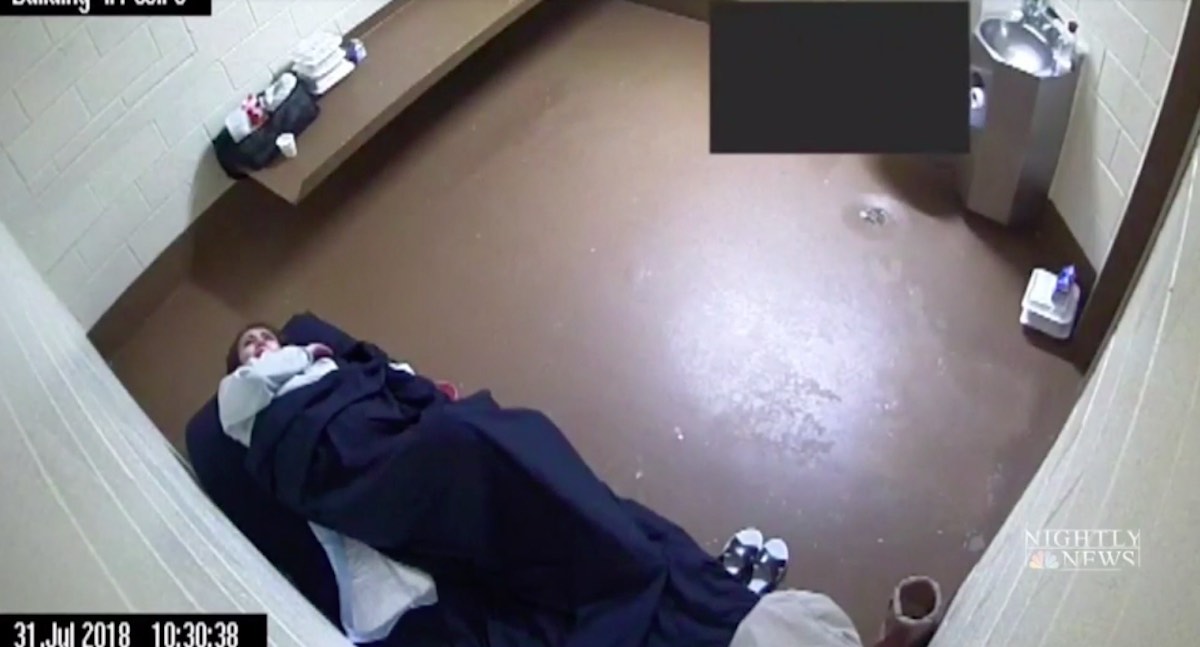 A woman is suing a Denver prison after she was left alone in her jail cell as she gave birth. Diana Sanchez was given no medical treatment even though she had told guards she was having contractions and her water had broken, she claims in a lawsuit. The entire horrifying ordeal was caught on camera, and the video was released to media by Sanchez’s lawyer.

According to NBC News, Sanchez was in prison for fraud — writing a check off of her sister’s account — and was eight months pregnant. After two weeks, Sanchez began having contractions. According to her lawsuit, she told deputies and Denver Health nurses at least eight times, yet she was ignored. But instead of giving her any medical treatment or taking her to the hospital, they “chose to take a ‘wait and see’ approach to their care, as though it were not patently obvious to anyone — with or without medical training — that Ms. Sanchez was in labor and required immediate medical attention,” her lawsuit said.

“The pain is indescribable and what hurts me more though is that fact that nobody cared,” Sanchez told KDVR.

In the video, Sanchez can be seen writhing in pain on her cot, screaming. Meanwhile, though deputies and nurses knew Sanchez was in labor, paramedics were never called, and she was given only an absorbent pad to lie on. After her water broke, Sanchez began screaming for help, and a deputy responded, but still, no one arranged for a transfer to the hospital. As Sanchez’ son was born, the door to the cell opened, meaning someone was there, watching as she screamed in pain — yet no one entered to help until afterwards.

“It’s very upsetting because now when my son grows up I’m going to have to tell him (how he was born) and it’s embarrassing,” Sanchez said. “I just feel so disappointed, so let down.” Documents from the jail showed that staff had acknowledged that her water had broken, and that she was “yelling and she’s in excruciating pain.” No one called for an ambulance. “I was screaming, ‘Can you please get the nurse? I’m in a lot of pain’,” Sanchez recalled. “Then I told her, ‘Look, my water broke, my water broke.'”

Only after the baby was born was an ambulance called, and neither Sanchez nor her son were given adequate medical care. “They put my son’s life at risk. Like at least him, he deserves a chance, you know,” Sanchez said. “When I got at the hospital (doctors) said I could have bled to death.”

In the lawsuit, her son’s birth was described as “a day of unnecessary terror, pain and humiliation that continues to cause her ongoing emotional trauma.” Today, Sanchez still has nightmares. “It just breaks my heart how helpless I felt,” she said.

To make matters worse, the Denver Sheriff’s Department conducted an internal review and said their deputies did nothing wrong. “That’s just emblematic of how broken the system really is,” Sanchez’ lawyer, Mari Newman, told the Washington Post. “They claim to have done a review and their conclusion is that nothing was wrong with the fact that a woman was never taken to the hospital and ended up giving birth in a dirty, cold, hard jail cell. It’s really unfathomable.”

Sanchez and her son were treated as if they were less than human, not deserving of the basic medical care all people deserve. Not only was Sanchez’s life put at risk, the life of her son was endangered as well. Someone who is incarcerated is still a human being, and should still be treated with basic dignity and integrity.