If there’s anything we are good at as a society, it’s turning a blind eye to the horrific things that happen right in front of us. Facebook has become a go-to spot for people to show these horrible things to a large audience. One such post got my attention this morning. It featured this picture and this description: 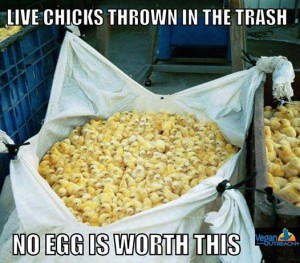 Baby chicks being tossed in trash. (from Vegan Outreach)

If you eat commercial eggs you are causing this. These males are thrown away LIVE like life-less trash because they won’t produce eggs. There are 3 things you can do about it.
1. Ignore because it’s too painful and you don’t know what to do.
2. You can do something. Anything. Share this.
3. Or you can join the fight to bring humanity back by actively joining related causes and raising awareness.

It’s up to you. But you get ZERO respect for choosing option 1.

This post was by Vegan Outreach, they work to end cruelty to aminals. And it’s kind of a shocking photo at first, but not when you really think about it. Do I have a problem with live animals being tossed in the trash because they won’t create a profit for a company? Of course. It’s cruel. But it is nowhere near as cruel or horrible as the fact that today 2,898 HUMAN BABIES will be tossed in the trash because they, like these chicks, don’t fit into someone’s plan.

What’s more horrible: chicks being tossed aside or humans being, not only tossed aside, but ripped apart by the limbs?

These pictures (from The Center for Bioethical Reform) are of HUMANS after an abortion. Don’t look away. No justification is good enough for this.

1. We can ignore it because it’s painful and horrible and we don’t want to look and don’t know how to stop it.

2. We can talk about it and spread awareness about what abortion actually does and is.

3. Or we can join the fight by volunteering at pregnancy centers, praying outside of clinics, or donating to groups like Live Action.

And as Vegan Outreach says, “It’s up to you. But you get ZERO respect for choosing option 1.”

If a chick and a baby were about to be harmed right in front of you, which one would you save? Which option will you choose?