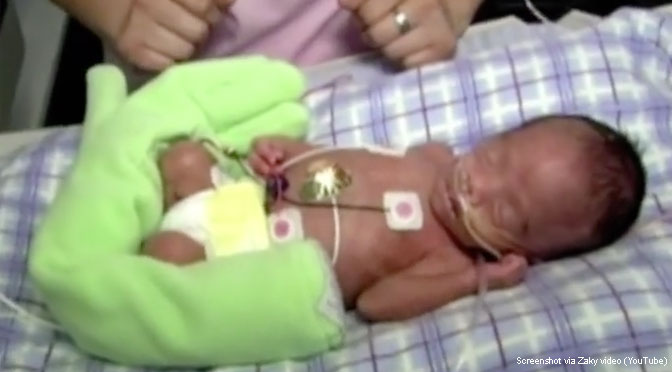 In 2001, preeclampsia forced Yamile Jackson to give birth to her son Zachary twelve weeks early at just 28 weeks gestation. Zachary weighed less than two pounds and had to spend the first 155 days of his life in the NICU. Jackson was able to be with her son during the day, but had to leave him at night. Wanting to ensure that he remained healthy and felt safe, Jackson invented a simple product that is now helping to save the lives of premature infants.

Zachary’s first few weeks of life were difficult as they are for any premature baby. But when he was three weeks old, Tropical Storm Allison flooded Houston and shut down the power that was helping to keep Zachary alive.  His parents and the NICU staff kept him alive by hand for 9 hours, taking turns “bagging” him.  It was then that Jackson promised Zachary that his struggles would not be in vain.

Over the weeks in the NICU, Jackson learned the importance of cradling her young son. Nurses taught her how to provide comfort and a feeling of containment.

Jackson, who has a PhD in both ergonomics and human factors engineering, wanted to be able to give her son those feelings at night. So she took a gardening glove and filled it with beans. She kept it on her during the day so it would have her scent, and each night, she placed it around her son. She was hoping it would feel to Zachary that his mother was right there cradling him, and it worked.

Premature babies struggle with apnea – in which they stop breathing and their blood oxygen levels dip, followed by bradycardia – in which their heart slows down as a result of the lowered blood oxygen levels. A parent’s touch can help prevent those episodes, but parents can’t always be there. The glove, called the Zaky, mimics that touch and helped Zachary regulate his breathing.

In fact, it worked so well, that after Zachary was discharged, a nurse from the NICU contacted Jackson and asked if she would make the gloves for the other babies.  She made 100 gloves and formed her company, Nurtured by Design, funded in part with a grant from Oprah.

“At his birth, I made a promise to my son Zachary that his pain and struggle to survive were not going to be in vain, and at Nurtured by Design we work on his behalf helping babies and families around the world, especially those that are hospitalized hence difficult to nurture, like he was,” Jackson wrote on the company’s website.

The glove may not seem like much, but an independent research project was performed in 2011 by Georgia College. Premature babies were monitored. Some had nothing in their isolettes with them, some had a Zaky glove, and some had a Zaky glove with the scent of their mother on it. The results were remarkable.

If you know a baby who could use a Zaky, but the hospital doesn’t have them, you can request one using your hospital’s code.