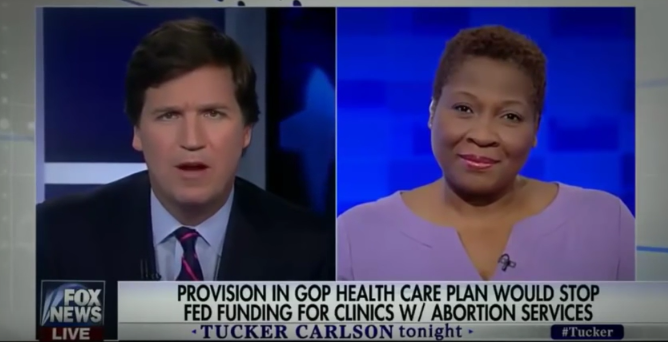 In light of legislation to repeal and replace ObamaCare, as well as defund abortion giant Planned Parenthood for a year, there is a lot of talk about what this will mean for women’s health. Much of what we are hearing is just that: a lot of talk. Perhaps no one better showcased this than Jehmu Greene, a candidate for the Democratic National Chair and former Planned Parenthood Action Fund board member, who was the first guest on the March 10, 2017 episode of Tucker Carlson Tonight.

In fact, the segment was largely dominated by Greene refusing to answer questions and parroting talking points, while ironically suggesting, “I think we should start with being honest.” Greene claimed that federal dollars do not go towards abortions, but admitted Planned Parenthood thinks taxpayers should fund abortion directly. Carlson, however, brought her around to common sense by illustrating that money is fungible:

If you didn’t like the NRA’s lobbying for the Second Amendment, but the U.S. government gave the NRA a half a billion dollars a year in taxpayer funding, and they said, “Well it has nothing to do with our lobbying for the Second Amendment, it’s just for something else that we do, say, gun safety,” you would say, correctly, “Money is fungible.” Of course. It subsidizes the things that I don’t like. And the same is true of Planned Parenthood, as you know. It’s money. It’s like liquid, it flows wherever it needs to go.

2. Planned Parenthood is Not the Great Health Care Provider They Pretend to Be

3. Women Do Not All Support Planned Parenthood

Does Greene really mean “any woman?” What about the female pro-life activists, successful pro-life feminist attorneys like Erika Bachiochi, or the 77% of women who support restrictions on abortion? What about the pro-choice women whose minds are changed when they see for themselves what abortion really is in these viral, animated videos? Surely if Carlson asked any of these women, he would get a different answer than Greene suggests.

4. Women Have Plenty of Options Besides Planned Parenthood

Later, Greene tried to claim that, without Planned Parenthood, women would have nowhere to go: “This is not an issue of removing these funds and there will be another place for these women to go. It’s proven, proven that that’s not the case…when it happened in Texas, when it happened in Wisconsin.”

Greene did not elaborate further on how these two states going head to head with Planned Parenthood makes her case “proven.” Texas had an alternative, better program, Healthy Texas Woman, that did not leave women hanging when Planned Parenthood lost its funding in the state.

Additionally, Planned Parenthood’s customer number — whether Greene is talking about just women or total customers served — is not as impressive as Planned Parenthood would like us to believe, since it’s about 0.9 percent of Americans. Not only will there be other places for women to go to, but these Federally Qualified Health Centers (FQHCs) which will instead receive the funding, outnumber Planned Parenthood 20 to 1 across the nation.

5. Ending Abortion is Not About Controlling Women’s Bodies

Greene again did not answer the question, but soon turned to truly bizarre talking points:

Why is it, answer this question, Tucker. Why is it that you are so against big government on every issue, except for when it comes to my uterus, and my vagina? Can you imagine if the government was saying, ‘Let’s legislate your penis?” That is not ever going to be allowed by you, or any of your male counterparts, and it is time that we get past this issue…

Abortion is not an issue of big or small government; it’s an issue of protecting the basic rights of human beings — a principle the U.S. was founded on, especially considering that the right to life is the first of our inalienable rights mentioned in the Declaration of Independence. Protecting human life isn’t a function of “big government;” it’s one of the clearly-spelled-out duties government actually has.

Further, pro-lifers have no desire to legislate Greene’s reproductive organs, or that of any woman. It’s the growing and developing human life which resides in the uterus — and his or her rights — that deserve protection.

While asking Greene for a fourth time why Planned Parenthood wouldn’t give up abortions in order to receive federal funding, Carlson reminded her that “almost half the country thinks it’s murder. It’s not about genitalia, it’s about a distinct human being.” Greene immediately deflected to a single poll, which does not even disclose the question it asked to respondents, but claims that 70 percent of Americans are in favor of the Roe v. Wade decision. She also mentioned that half of Trump voters don’t want Planned Parenthood defunded, which is a laughable claim coming from a mere 50 people who were subject to Planned Parenthood focus groups.

6. Planned Parenthood Does Not Perform Mammograms

Greene even closed with a deception, claiming that women go to Planned Parenthood “in a community that has no other health center available to them, within hundreds of miles.” When she implied that these women could only go to Planned Parenthood for a breast cancer screening, Greene was unable to answer how many mammograms the organization provides.

Carlson asked Greene to get back to him about the mammograms, but Greene will come up empty because Planned Parenthood does not actually provide mammograms. Their CEO and President, Cecile Richards, admitted before Congress in 2015 that her organization does not and cannot provide them, though she also falsely claimed they have never led anyone to believe that they do. Live Action has documented Planned Parenthood and its supporters misleading and lying about this, in an attempt to gin up public support. The breast exams which Planned Parenthood provides, which are not the same as mammograms, are only 1.8 percent of the market share in the United States.

Perhaps this ugly reality is what makes it so hard for Greene — or anyone — to defend Planned Parenthood’s taxpayer funding.