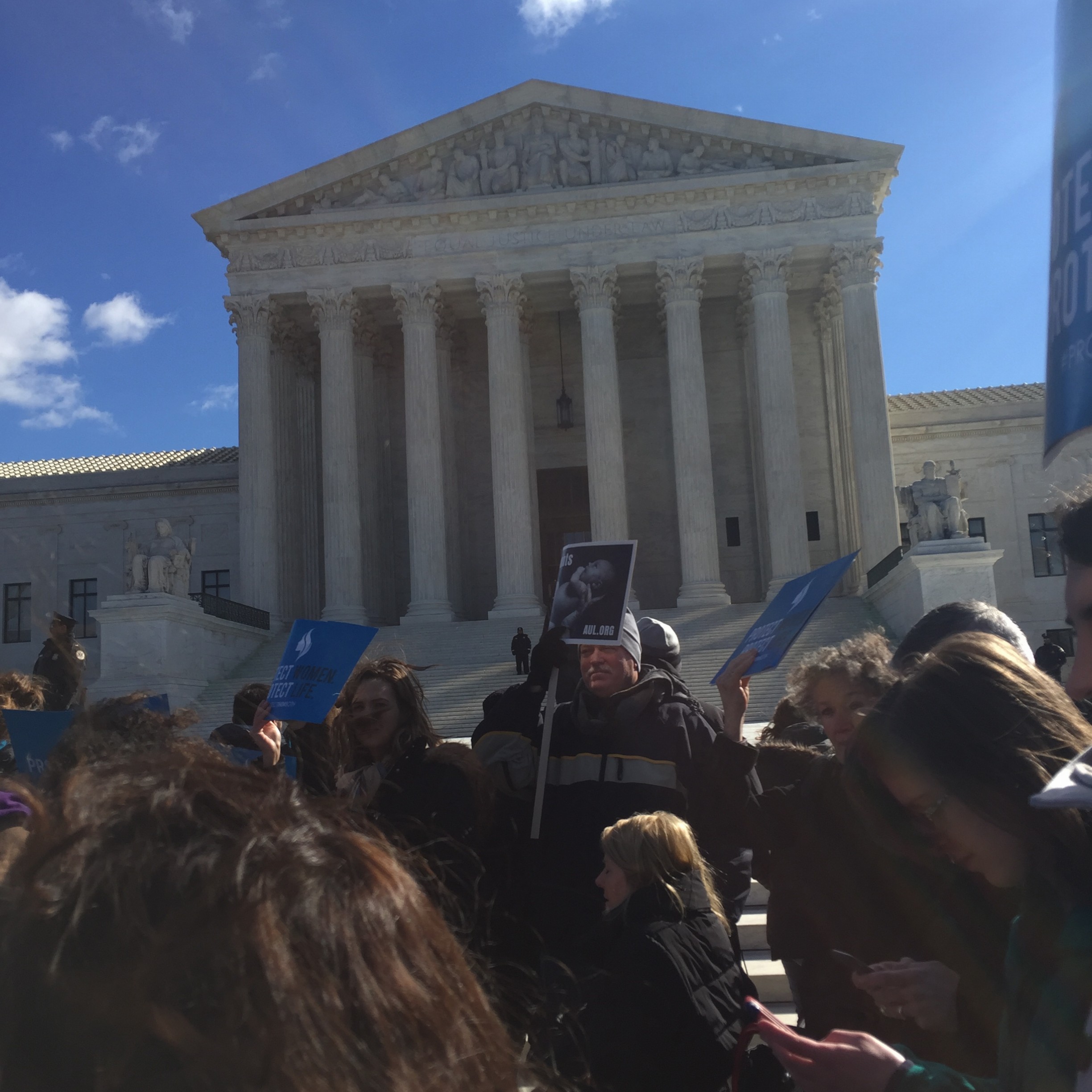 On Wednesday, the U.S. Supreme Court heard oral arguments in Whole Woman’s Health v. Hellerstedt regarding the HB2 pro-life law out of Texas. Specifically, the Court will decide if it’s an “undue burden” to require abortionists to have admitting privileges at a hospital within 30 miles, as well as requiring an abortion facility to operate according to the same standards as other surgical centers.

As I previously wrote, abortion supporters claim to be for women and women’s health, yet ignore the facts of what this case is truly about. Those who argue that adhering to current medical standards are too burdensome for abortionists – who want to be thought of as performing legitimate medical procedures – don’t support women. They support abortion.

Inside the Court, there was no doubt an intense atmosphere. SCOTUS blog noted that the oral arguments ran 26 minutes longer than expected.

Outside, where I was present, there was a different kind of intensity as a momentous showdown occurred. Students for Life of America organized a rally featuring elected officials, those representing national and Texas pro-life groups, and post-abortive women. Many speakers emphasized the point that even those who support abortion should support such commonsense laws designed to protect the health and safety of women who seek abortions.

The sizable crowd consisted of a large number of abortion advocates. Groups such as Planned Parenthood, NARAL Pro-Choice America, the ACLU, and All Above All, which advocates for taxpayer funded abortions, were present. Planned Parenthood even paid for protesters to be bussed in.

And yet their larger numbers weren’t enough. These pro-aborts were full of anger and hurt. They came over to the pro-life rally, but it wasn’t to hear what the other side had to say. And it wasn’t to listen to where we might be able to find common ground.

These abortion advocates – who claim to be pro-choice – weren’t for much choice at all. I witnessed their attempts to disrupt and interrupt our pro-life rally by pushing and shoving, blocking speakers, and attempting to knock over or steal equipment. One even made a rude comment to me personally.

Despite their efforts, these abortion advocates could not completely disrupt our rally. Speaker of the House Paul Ryan still made it to the stage. I can only describe it as ‘epic’ to be so close to one of my political heroes, and to hear him thank those like me for being on the side of life. During the several hours I was present outside the Court, I heard bits and pieces of the pro-abortion rallies. It was about as angry and full of ignorant slogans and talking points as you would expect. And while I didn’t agree with what speakers were saying, it would never have crossed my mind to disrespectfully disrupt such speeches.

I still felt blessed to be present at the Court for such a momentous occasion. There’s always a sense of encouragement and camaraderie at these events, even when pro-lifers are outnumbered. Christina Bennett, also a contributor for Live Action News, was the emcee of the Students for Life event. As the rally became tense due to the disruptions, Christina reminded us that abortion advocates are not our enemies, and that we have love and care for all people. She also shared her testimony of how she was almost aborted. While I had read of Christina’s story before, it brought me to tears this time, as did her powerful prayer.

No matter what our numbers, and no matter what the other side tries to do to censor us, it was my honor to be a powerful witness for life.