Jennifer Morbelli – one of the countless, tragic deaths Roe has given us.

In 1960, Planned Parenthood president, Mary Calderone, said that 90% of illegal abortions were being performed by physicians.

So much for the coat hanger argument.

Did you know that “[s]uicide rates among aborting women are 6 times higher compared to those who give birth”?

So much for abortion’s non-harmful effect on women.

Read their stories – and look at the names of these hundreds of women – before you believe that abortion is “safe” for women.

Students for Life of America is on tour on college campuses around the nation right now, shattering common lies told by abortion proponents about the “safety” of abortion. SFLA is helping student groups inform their fellow collegians about the real facts surrounding the abortion debate. A generation that has grown up on Roe deserves to know the true impact of abortion on our women, our families, our children, and our culture.

Kristan Hawkins, president of SFLA, explains that the “What has Roe Done for Us?” Tour is traveling to 26 colleges in 20 states. It is a new approach to campus pro-life outreach, and promises to challenge common thinking:

Our tour walks her though a conversation about abortion.

We show her what Roe v. Wade has given us, pointing out that suicide rates among aborting women are 6 times higher than those who give birth, showing her that 53 out of 68 worldwide studies have proven that abortion increases a woman’s risk for breast cancer, and highlighting the undisputed fact that abortion significantly increases her risk for pre-term delivery in future pregnancies.

Of course, telling lies and distorting truth that ultimately hurts women is sadly business as usual for the abortion industry. SFLA’s tour is particularly important because it brings the real, basic truth to women and allows them to talk about it. It creates a discussion – one we must have among our young people in this nation.

From SFLA’s latest update on the tour:

The best thing about the Roe Display was that in created a bridge to talk to people and to open dialogue. We all know that abortion would still be morally wrong even if it helped women, but we have to attack the lies and myths around abortion and engage people compassionately where they are at. This display allows us to do that. Over and over again, I got the chance to change people’s minds on abortion because I started with addressing how abortion affects women and then transitioned the conversation into asking how abortion hurts the other human being involved, the baby.

If you’d like to help bring the “What has Roe Done for Us?” Tour to your campus, contact SFLA today! And remember, as Hawkins says, that the “tired, old argument that abortion must be legal to be ‘safe’ is nothing more than a fear tactic.” So get the facts for yourself today. 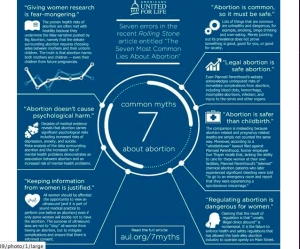 (7 Common Myths About Abortion) Read about it here.