The battle for protecting black lives begins in the womb.

Tonya Reaves was a beautiful 24-year-old black woman. Tonya was an engaged mother of a one-year-old son named Alvin. She had a twin sister named Toni and a family that loved her. For reasons we may never know, Tonya went to an Illinois Planned Parenthood for an abortion on Friday, July 20, 2012.

I’m a 30-year-old black woman who’s looking forward to marriage and children in my future. For reasons I openly disclose, I am adamantly opposed to abortion. While there are differences between Tonya and me, there are also common bonds that link us together – specifically, the reality that we are members of a race that’s been targeted by the abortion giant Planned Parenthood.

My mother’s choice to leave her abortion appointment saved my life, while Tonya’s decision to abort resulted in the untimely loss of her life and the life of her unborn baby. The second-trimester dilation and evacuation (D&E) she underwent is a surgical abortion procedure used to terminate a pregnancy after 16 weeks’ gestation. The fetus is literally dismembered with the doctor’s forceps, the skull is crushed and removed, the lining of the uterus is scraped, and the remaining fetal tissue is sucked out of the uterus. 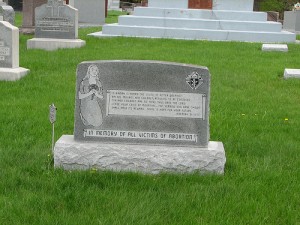 Did Tonya have any idea that a seemingly “safe” procedure would cost her so much? Her fiancé is left without a bride, her identical twin sister is missing her “other half,” and her son will grow up without his mother. I doubt that Tonya had a full picture of what her “choice” could entail. I identify with her while I ache for the millions of other black women who believe that Planned Parenthood is an organization worth trusting.

When the news of Trayvon Martin’s death hit the airwaves, the public responded with passion. Cries for justice and accusations of racism came from the NAACP, Jesse Jackson, and Al Sharpton. Thousands marched in New York, Florida, and D.C., and throughout the country. People of various ages and races took pictures of themselves wearing hoodies along with the words ” I am Trayvon Martin.” Pastors urged their congregations to wear hoodies to church in an act of solidarity with Trayvon. President Obama commented on the death, saying, “If I had a son, he’d look like Trayvon.”

Jesse Jackson recently wrote an article for the Chicago Sun-Times on the Aurora, Colorado theater shooting entitled “Lax gun laws allow terrorism at home.” In his article on gun control, he shared a quote from a William Butler Yeats poem called “The Second Coming”:

[T]he ceremony of innocence is drowned; the best lack all conviction, while the worst are full of passionate intensity.

Jackson then asked,“ How many must die before ‘the best’ stand and speak?”

That is the same question I could ask him. In 1977, Jackson wrote:

Jackson, Sharpton, and the NAACP have remained silent over Tonya’s death. Although Tonya Reaves lived in same city our president hails from, he hasn’t publicly mentioned her name. Instead, President Obama took time to talk about the organization whose possible negligence likely caused her death. In a recent gathering at the Oregon Convention Center, Obama said:

Mr. Romney wants to get rid of funding for Planned Parenthood. I think that is a bad idea. … I’ve got two daughters. I want them to control their own health care choices. We’re not going backwards, we’re going forwards.

What does going forward mean, Mr. President? More women butchered from “safe” abortions? Taxpayer dollars being used to fund a corrupt organization? If going forward equals furthering support to Planned Parenthood, I’d rather be left behind.

Thankfully, the true “best” are standing up. There is a company of black leaders who are raising their voices in the midst of this tragedy. Here are a few words from my personal friends and pro-life advocates:

Abortion is the leading cause of death among Blacks and once again Planned Parenthood, the nation’s largest abortion provider, is involved in the death our women and children. No one has the right to take the life of an innocent human being. It’s time Planned Parenthood be held accountable for the loss of life in its abortion dens. – Walter B. Hoye II, Founder & President, Issues4Life Foundation.”

Surely the African-American community will wake up and stop giving Planned Parenthood a pass after seeing Tonya Reaves killed and her unborn baby butchered at their hands. – Rev. Arnold Culbreath, Director of Urban Outreach for Protecting Black Life

We pray this tragedy awakens the collective conscience of Black America to a wretched, unregulated industry that has profited from the deaths of children and deliberate miseducation of young women. – Dean Nelson, Chairman, Frederick Douglass Foundation.

Tonya Reaves [sic] death is not about a political agenda. This is about the healthcare disparities Planned Parenthood and other abortion providers have long inflicted upon Black women all across America. This is about the failure of an organization that holds itself out as a champion of women, to champion reasonable medical care standards for women of color. – Catherine Davis, Founder and President of the Restoration Project

The battle for protecting black lives begins in the womb. Planned Parenthood is not a friend to the black community. I along with other leaders from the National Black Pro-life Coalition express our heartfelt sympathy to the family and friends of Tonya Reaves.