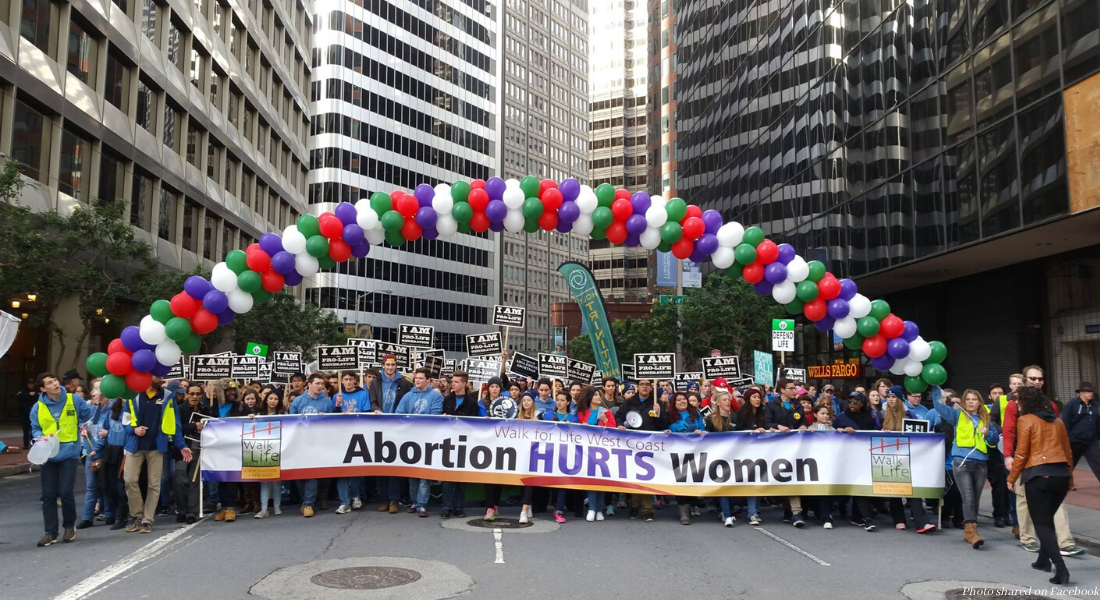 UPDATE, 1/29/20: As mentioned, the Walk for Life West Coast was set to feature some of the babies — now born — of women who broadcast their heartbeats at the Walk last year. See the video below:

On January 25th, tens of thousands of people will gather in San Francisco, one of the most pro-abortion cities in the country, in an effort to change hearts and minds. Now entering its 15th year, the Walk for Life West Coast will include speakers and an info faire, and is expected to draw around 50,000 people from all over the United States and Canada. In an interview with Live Action News, Eva Muntean and Rev. Clenard Childress spoke about the history of the walk, raising awareness of the evil of abortion, and what to expect this year.

Eva Muntean works full-time for Ignatius Press, but as a volunteer, she co-founded the Walk for Life West Coast in 2005, hoping to make a “sister” event to the March for Life in Washington, D.C. “They always do theirs Monday through Friday, we’ll do ours on a weekend, we’re going to make ours be about how abortion hurts women, because there are so many abortions in this area. So it got started by wanting to show that there are a lot of people here in the Bay Area who care about life, and we just grew so fast, year after year,” Muntean told Live Action News. “Our first year we had about 7,500 people, which was amazing to us, and after that, it just kept growing and growing.”

While many attendees at the walk are from California, there are people who come from far and wide to attend. “We get people from Canada, we’ve definitely gotten people from the east coast who are just curious to see a Walk for Life in San Francisco!” she said. “But mainly we get people from Nevada, Arizona, Wyoming, Oregon… the majority come from the west coast.”

Despite the growing success of the walk, organizers have faced heavy opposition. “The people that live here, most of them who come and see or run into us are just more shocked than anything else,” Muntean said. “But the government of the city has been very vocal against us. From year one, the city issued a proclamation against us, and a few years later, when we put up 50 banners on Market Street saying ‘abortion hurts women,’ they were outraged, and they issued another proclamation against us. So they’ve not been too pleased with us.”

Still, they’ve been able to reach people. “A couple of years ago, we actually had a lady come up to one of our volunteers, and say that she had been coming out every year against us as a protester,” Muntean recalled. “But that year, it had changed her mind, and she was there to join us.”

According to Muntean, many of the people who come to the Walk for Life West Coast are young, and their enthusiasm has helped the message to grow. “They go back to their schools and start pro-life clubs, or write papers on the pro-life movement. It just spreads,” she said. “And there are walks in LA and San Diego that started because of the Walk for Life West Coast. So there’s a lot of different fruits from the event. That’s why we all work so hard; every one who works on the event does it for free. We’re all volunteers who have full-time jobs elsewhere, so this is definitely a labor of love, and a labor of conviction, that life is precious.”

One of the most moving moments from last year’s walk was when seven pregnant women came onto the stage and played their preborn babies’ heartbeats across the silent square. This year, that same video will be played again, with four of those same women coming out with their now-born children. “So that they can see that child in the womb that was there last year is now here outside of the womb,” Muntean explained. The three that couldn’t be present gave pictures of themselves with their babies to be shown.

While the March for Life has a new theme each year, the Walk for Life West Coast has focused on how abortion hurts women. “You don’t hear about that too much. We know that in this area especially, there are so many abortions, and there are so many women who are hurting, consciously or subconsciously,” Muntean said. “By saying ‘abortion hurts women,’ we want women who are post-abortive and are suffering to know we’re reaching out to them, because it’s so needed in this area.”

One of the only speakers who has appeared at the walk almost every year is Rev. Clenard Childress, who has served as Senior Pastor of New Calvary Baptist Church since April of 1989. But he’s also dedicated himself to advocating for the right to life, especially focusing on the African-American community. When he received the call to speak at the first walk, he agreed. “It turned out to be one of the best events of my pro-life career,” he told Live Action News. “It was one that was engaging, and at that time, there were about 4,000 – 5,000 of us, and there were about 1,000 – 2,000 of them counter-protesting us along the way, and when you’re in the bastion of liberality, to have such a positive walk for the Judeo-Christian ethic, which is the sanctity of life, it was quite moving, quite powerful.”

Like Muntean pointed out, San Francisco was not overly welcoming to the walkers — and yet Childress said they kept their spirits up in the face of opposition. “To hear the songs that were sung by the students, while they were being pelted by who-knows-what, still singing ‘Ave Maria,’ reminded me of the echoes of the Civil Rights movement, when in the midst of those who were vehemently opposing them, they also sang,” he said. “Not the same songs, but it’s the same spirit. It’s a moving event, and I’ve consented to come back every time they’ve requested me. We need to be in the public square.”

The African-American community has been disproportionately affected by abortion, which Childress says is due to a combination of the abortion industry’s eugenic roots, and greed. “At the core of it, is eugenics, social engineering, evil,” he explained. “They want to basically create the world that they perceive would be the best world in their estimation. [They] feel these methods are necessary in order for the world to function in the society that we feel we will create. And so eugenics has always been a part of that movement… [b]ut I’ve also said that if abortion was not lucrative, it would not be legal. There are those that are engaged simply for the financial game. Thanks to the undercover work of David Daleiden, we know that there’s body parts being sold. It’s insidious, and America seemingly can’t get away from slavery, and once again, there’s body parts or bodies being sold in America for profit, and for gain. So pro-lifers are the true civil rights workers of the day, because our voices are the only ones who are vehemently against this industry.”

“First of all, we can’t depend on elected officials to end this for us. It’s something that will always be, we the people. There’s much work yet to be done, and it has to be very much so in the public square,” he said. “People need to see our disdain, our outrage, and it has to be done in a fashion where they can see our passion for our most vulnerable, who are being executed without access to the American dream. Roe v. Wade is the scourge of the country, it’s a law that needs to be abolished. So we have to keep that amongst this present generation, and generations to come, that we will be relentless, until this injustice is overturned.”

The Walk for Life West Coast will take place on January 25, 2020 at San Francisco’s Civic Center Plaza. For more information, visit their website at https://www.walkforlifewc.com.