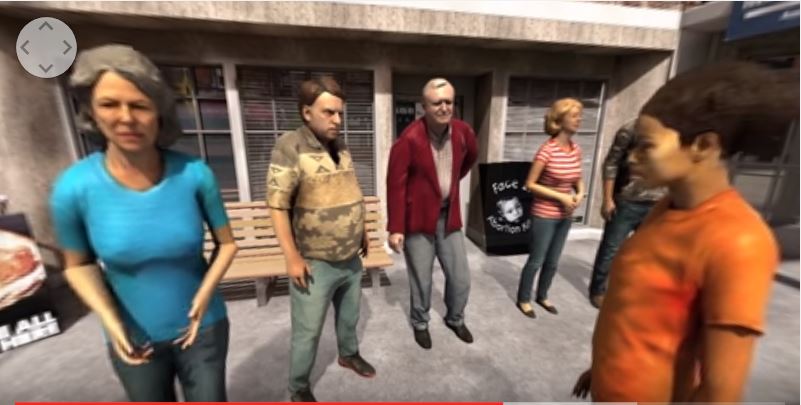 A virtual reality video with a 360-degree camera claims to show the truth about pro-life activists who counsel outside of abortion facilities. Across the Line follows a post-abortive woman, Kristina Nailen, playing the part of a patient as she goes to an abortion facility where she meets with actual Planned Parenthood abortionist Raegan McDonald Mosley. Along the road to the Illinois facility, Nailen is met by pro-life activists.

In the video, you can hear the activists shouting, “You’re gonna kill your child,” but most of the audio is garbled. The driver of Nailen’s car pulls over to speak with a man about which building the abortion facility is in. He offers to take Nailen to a local pregnancy center instead. He tells her that what she calls the “health care clinic” is really an “abortion clinic” that performs up to 30 abortions a day.

The man is calm and collected and tells her that there is a more “dignified choice.” The driver of the car argues that the choice to abort is “very dignified.” However, after viewing a video that explains one of the most common abortions procedures, such as the one below, it becomes clear abortion is horrifying, not dignifying:

It’s hard to argue that this scene in Across the Line, with people shouting in the background, is fabricated, but none of the activists seem to display any of the rude or forceful behavior that the creators of the video claim they do.

While Nailen is in the facility with Mosley, the abortionist apologizes to Nailen for the behavior of the pro-life activists while Nailen acts completely distraught because of them. In reality, she is likely distraught not because the activists exist, but because they remind her of the truth of the abortion she has already had. If what they say bothers her, it isn’t because they say it; it’s because it’s the truth. The abortionist tells her, “I’m so sorry that you had to go through that today. Not what you need on a day like this.”

With this statement, the abortionist is openly admitting that this is a bad day. She’s saying that the day a woman has an abortion is a bad day, not the empowering and amazing day that the Planned Parenthood marketing team claims it to be. And Nailen, a mother who has had an abortion, agrees with this. Abortion isn’t a good thing. It isn’t a routine right of passage as the pro-abortion camp would like us all to believe.

Finally, Across the Line features a computer graphic component that depicts pro-life activists harassing a woman outside of an abortion facility. The activists are shouting:

“Young lady, the hoodie cannot hide you from your guilt!”

First, if the words heard in Across the Line are true, these particular pro-life activists and those like them need to rethink their strategies. Scaring and shaming women is not the goal of the pro-life movement, and it is not at all effective in saving lives. Shame is one of the reasons women seek abortion, and screaming at them that they are shameful only fuels that feeling and further pushes them into the facility. Anyone who treats women this way should learn from this video what not to do as a pro-life activist.

Second, the video has neglected to include the multitude of pro-life activists who stand outside abortion facilities and treat women entering the facilities with respect. It leaves out the majority of pro-lifers who hand out brochures and offer help and hope. It is missing the people who simply pray silently or out loud. Therefore, it isn’t showing the entire truth — or the most common encounters a woman might have — but only the pieces that suit the pro-abortion agenda.

The short film is less than eight minutes long and was created by Nonny de la Peña, Brad Lichtenstein, and Jeff Fitzsimmons. Planned Parenthood published the video on YouTube on February 3, 2017, and to-date it has received less than 8,000 views.

If you are or someone you know is struggling after an abortion, see this article for resources that may help with healing. If you are making a decision about abortion, see Clinic Quotes, 10 Reasons Not to Have an Abortion, Abortion Procedures, and What to Do if Your Boyfriend (or Anyone) is Pressuring You to Have an Abortion. You can also check out Stand Up Girl and Option Line or Pregnancy Line to find local resources, help, and trained people to talk to in your area. If you’ve begun an abortion and are regretting your decision, the 24-hour, nurse-staffed hotline at Abortion Pill Reversal may be able to give you information on reversing your abortion. Men involved in a pregnancy situation can check out Abortion and Men and Abortion Exploits Women.