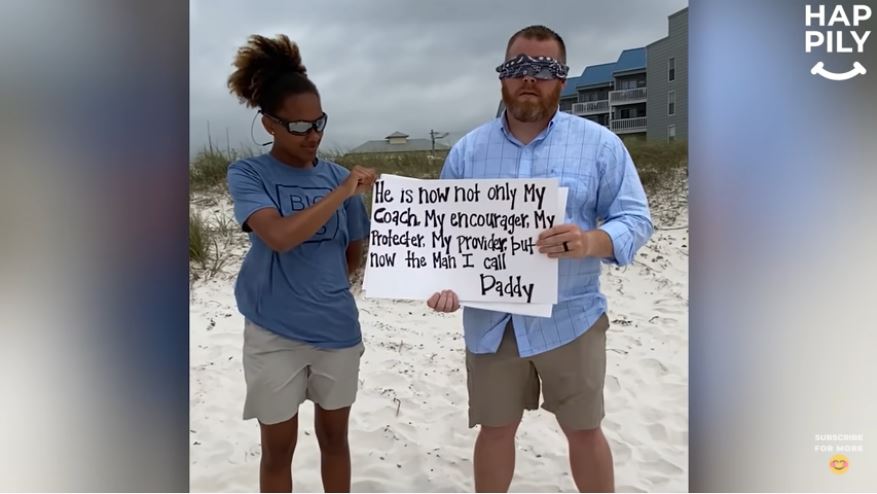 Youth sports coach Daniel Donaldson of Haleyville, Alabama, met a young girl named Alecia in 2019 when he became her coach and mentor. After he and his wife Tiffany learned that Alecia was in foster care and that she wanted to move in with them, they didn’t hesitate to step up. A temporary four-month custody period turned into an official foster care placement — and now an official adoption.

“Tiffany and I were both always raised that if you have the means to help, you help,” said Donaldson. “We believe the state of the world could greatly benefit from this mindset. There are children out there everywhere that need help or better yet a chance.”

The couple had left it up to Alecia to decide if and when she wanted to become an official member of the Donaldson family, and as a surprise for his birthday in May, Alecia decided to ask her former coach to adopt her:

Fourteen-year-old Alecia told Tiffany of her plan, and the two, along with the couple’s three sons — Brody, age 12, Samuel, age 4, and Deacon, age 1 — each played a role in the emotional video. A blindfolded Donaldson held cards telling the story of how Alecia had spent 524 days as their foster child.

“This man here started out as just my coach, but he stepped up when he didn’t have to,” the signs read. “He is now not only my coach, my encourager, my protector, my provider, but now the man I call Daddy.”

When Donaldson took off the blindfold and turned around, each family member was holding signs that together read, “Let’s make it official. Will you adopt me?” He immediately hugged Alecia in a touching moment between father and daughter.

“I really didn’t know what to do except hug her — I’m not sure that I really answered the question with words for a while,” said Donaldson. “I really had no idea what in the world was about to happen. They always crack on me for being old, so I thought they were probably doing something to make fun of me being old.”

Alecia told World News Tonight that asking him to officially be her father was an unforgettable moment. “I will always remember that day and the hug he gave me,” she said. “When he hugged me I felt so happy and safe.”

There are more than 100,000 children in foster care who are currently eligible for adoption, according to Adoption Network. Each of these children deserves to have a loving family before they age out of the system and become more at-risk for homelessness, unemployment, low educational success, and unintended pregnancy.