A Wisconsin bill would bar the University of Wisconsin at Madison staff from training its students to do abortions at Planned Parenthood as part of their OB-GYN residencies. The university is vehemently opposing the bill, insisting it would lose its accreditation as a result. Planned Parenthood, who partners with the university in training its OB-GYN residents to do abortions, opposes the bill as well. The Associated Press reports on Assembly Bill 206:

The bill would make it illegal for UW employees to train medical residents, or perform abortions, at Planned Parenthood or any other private facility where abortions are done, other than hospitals.

Supporters say it’s needed to prevent state-funded employees at UW from being paid by Planned Parenthood, which they say is a way around a state law forbidding taxpayer-funded abortions.

“This bill does not shut down abortions, this bill shuts down a residency training program,” testified Robert Golden, dean of the University of Wisconsin School of Medicine and Public Health.

And Golden insists that would “destroy” a part of their medical school to not have their doctors committing abortions and teaching others to do likewise:

Golden said the university has already been notified by ACGME that if the bill passes, the ob-gyn residency program would first be cited for non-compliance, and would then lose its accreditation.

Golden also made dramatic statements, saying, “Nobody would choose to come here” for schooling if this bill passes. It’s reminiscent of the dramatic headlines and comments that made rounds in 2011 when Arizona passed a similar bill. As a matter of fact, abortion proponents used the very same verb as their Wisconsin counterparts, saying in 2011 that passing the Arizona bill, HB 2384, would “destroy” the OB-GYN program at the University of Arizona.

However, that program is still alive and well six years later, and has not had any lapse in accreditation, as its history shows: 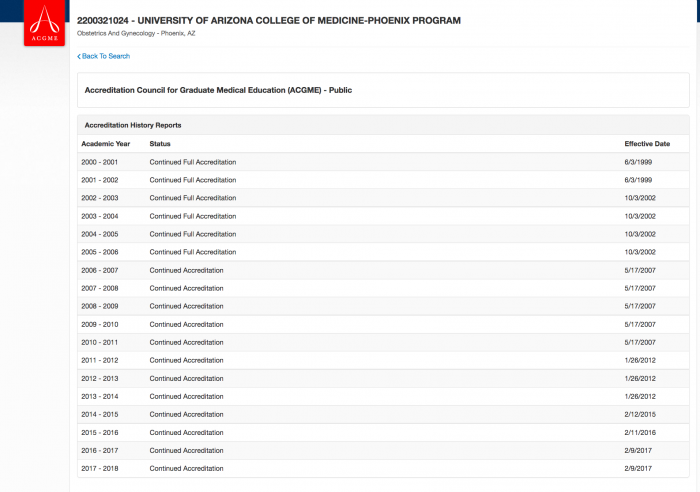 And this is something that Donna J. Harrison, M.D., executive director of the American Association of Pro-Life Obstetricians and Gynecologists (AAPLOG), knows. She calls Golden’s bluff, telling Live Action News:

There is no reason that OB-GYN physicians should be forced to train in killing their unborn patients.  Unfortunately, OB-GYNs get plenty of experience emptying the wombs of women whose babied have died [in miscarriage].

Further, Harrison said that this assertion that the school would lose its accreditation is simply not the truth:

It is not true that Catholic hospitals lose their OB-GYN training accreditation for not performing abortions, and it is similarly not true that UW Med would lose their accreditation for not performing abortions. This is a preposterous claim, designed to defend an indefensible alliance between a public institution and an abortion facility. The claim needs to be seen for the smokescreen that it is.

But what about the apparent mandate that the Accreditation Council for Graduate Medical Education (ACGME) has that its residents in OB-GYN programs be trained in abortion procedures? It is certainly true that it’s part of their accrediting program. As the requirements note:

IV.A.6.d).(1) Programs must provide training or access to training in the provision of abortions, and this must be part of the planned curriculum.

While the way it’s worded makes it sound like a requirement for accreditation, Harrison says, that’s not true, adding:

ACGME would love it to be mandated.

However, they have never enforced this, nor is it enforceable because of the current federal conscience protections. And any attempt at enforcing this will spark a challenge which will certainly go to the Supreme Court.

Harrison is correct. For example, as the Capital Times reports, “[one of the bill’s sponsors] André Jacque noted that Arizona has a similar statutory provision, and its two state medical schools remain accredited.” The Times also adds:

Nothing in the bill would stop UW physicians from providing or training on abortions outside the scope of their employment, Jacque said.

But within the scope of their employment, the bill would bar these public employees from teaching, training, or committing abortions – and that includes teaching them how to commit abortions like this second trimester D&E procedure, explained by former abortionist, Dr. Anthony Levatino:

The concerns that precipitated the Wisconsin bill likely resulted from The Center for Medical Progress’ undercover videos, which resulted in a widespread investigation by a congressional committee, the Select Investigative Panel on Infant Lives. When the final report of that committee was released, the University of Wisconsin’s name appeared throughout the 413 pages of the report. The report says:

The Panel identified several research institutions across the United States, most of them state universities and virtually all of them recipients of federal as well as state funding, that have formed a close relationship with one or more abortion clinics. They regularly acquire tissue from those clinics for research purposes and in some cases distribute fetal tissue to other research institutions. (p. 234)

DaVinci and other fetal procurement companies are necessary in the abortion business model, as the Panel report showed: 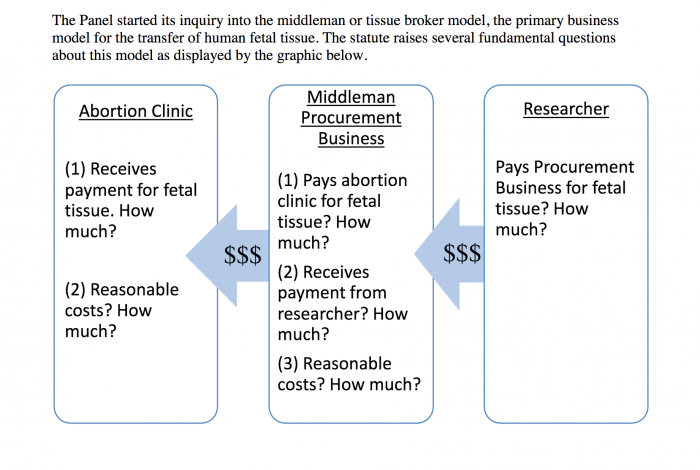 According to the Panel’s report, UW was one of 14 institutions that also received fetal tissue from the Human Fetal Tissue Repository (HFTR); also, UW was noted to be one of three institutions the panel listed as asserting that human fetal tissue was necessary to developing vaccines. (p. 393).

The Wisconsin bill simply seeks to un-muddle the line between a public institution with ties to the abortion industry’s profitability and the private abortion facility. While those opposed are claiming that they will lose accreditation, the fact is, that won’t happen. What will happen with passage of this bill is that taxpayers will stop paying salaries to public employees who then go to work for a private abortion corporation dismembering preborn babies in the name of education.