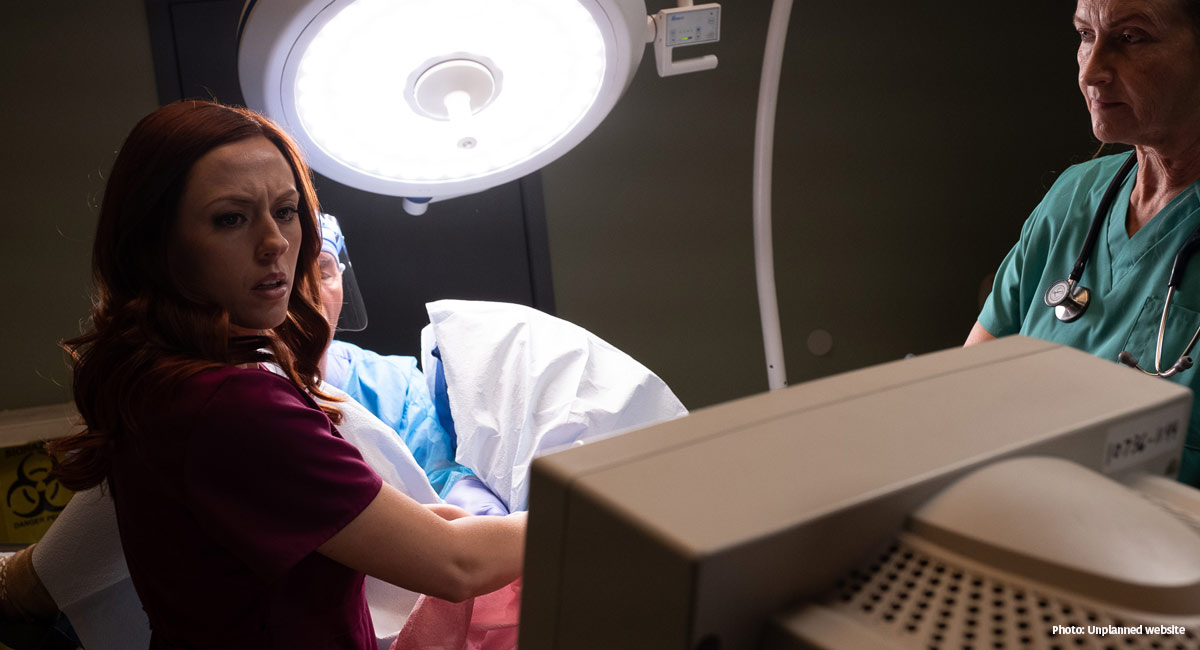 Warning: This is a movie review, and there may be spoilers below!

Viewers may recognize a few cameo appearances: Live Action’s founder and president Lila Rose (as a journalist), former abortionist and now pro-life educator Dr. Anthony Levatino (as an abortionist), and My Pillow inventor and CEO Michael Lindell (as a construction worker). As an investor, Lindell also contributed $1 million to the film’s $6 million budget.

The film is the first movie from Pure Flix to be rated R by the MPAA. Abby (played by Ashley Bratcher) is a wide-eyed, Southern college girl from a pro-life Christian family. She begins volunteering at a Planned Parenthood facility after being convinced that the organization’s purpose is to serve women, in an effort to make abortion as rare as possible. She eventually finds herself employed as a counselor at the facility in Bryan, Texas, convincing women with unplanned pregnancies that abortion is the best choice, and that the faster they choose it, the cheaper it will be. Her commitment to the Planned Parenthood mission is unwavering, despite the clamor and persistence of pro-life activists at the fence, her parents’ disappointment, and her own two miserable abortions, which resulted from a relationship that ended in divorce. Even when she later finds and marries a pro-life man, Abby’s patient husband Doug (Brooks Ryan) doesn’t convince her to leave her job.

Abby and other women in the story rely upon denial to numb the pain of dealing with abortions every day. She and the other workers are either gaslighted or given empty reassurance when they instinctively know something is wrong with what they’re doing. Working in such an environment doesn’t allow escape, so Abby must let her heart become calloused.

READ: ‘Unplanned’ star shocked by mother’s revelation: ‘I was going to abort you’

Abby’s work ethic and failure to shed tears while examining dead baby parts in the Products of Conception room impresses the facility director (played by Robia Scott), a sort of ‘ice queen’ who chooses Abby as her successor. Ever the overachiever, Abby excels in her new role, even trying to keep business running during hurricane weather for as long as possible. Her work is award-winning, despite her occasional doubts about her superiors’ vision for the organization.

Then comes the moment when, via live ultrasound, Abby sees what an abortion looks like on the inside.

This scene is groundbreaking in that, perhaps for the first time in cinema, audiences can experience kinesthetic empathy with a baby in the womb (modeled by the editor’s baby son, Cash Adams). When you watch the baby on sonogram struggle to flee for his or her life, pulling deeper into the womb to evade the abortionist’s tools, you feel panicked for that little person. You want the child to get away and live. The tense moment has the wince factor of a horror movie, and it’s reasonably the part the MPAA found “most problematic.” But the violence throughout the film is not excessive or grotesque. The sheer earthy reality of it is what makes it disturbing.

True to the pattern of Johnson’s book, the film places the pivotal scene in the beginning, then takes a few steps back to build towards that same moment in the middle of the film. If someone sees no more of the movie than the first ten minutes, they will be moved by Abby’s gut-wrenching experience. If someone who might be triggered by the abortion scenes watches only the second half of the movie, they will still feel the impact of Abby’s revelation, without seeing the most traumatic details.

Human nature is multidimensional in this story. When Abby is pregnant with her daughter Grace, her Planned Parenthood co-workers throw a baby shower for her, despite earning their salaries chiefly by ending other women’s pregnancies. While some pro-life activists at the fence are prayerful and gentle towards the women entering the facility, others are so overcome with disgust that they resort to anger and fear, forgetting to respect the humanity of the mothers as well as the babies. When news breaks of abortionist George Tiller’s murder at the hands of a mentally ill gunman at Tiller’s church, Abby’s husband takes extra steps to ensure her safety. When Abby leaves Planned Parenthood and joins the pro-life movement on the other side of the fence, she grieves over the innocent lives she helped to take — and over her lost friends at Planned Parenthood who might be compelled to betray her. She knows they mistakenly believe they are saving women, and — as she argued when once attempting to match wits with Shawn Carney (Jared Lotz) — they believe that it is a matter of civil rights.

Ashley Bratcher bears the emotional weight of Abby’s story very well as the film’s leading lady. But there are some problems, as the latter half of the film in particular flattens under its ambitions, a reminder that independent Christian cinema is still transitioning from milk to meat. Kaiser Johnson comes to the ending’s rescue, as Abby’s audacious lawyer Jeff Paradowski saves the day.

But “Unplanned” makes strides in its willingness to understand and demonstrate what abortion does to women. Everyone should watch this film, whether they want abortion to be an option for themselves or the women in their life, or want to pray at abortion facilities, or think abortion can be solved by making it “safe, legal, and rare.”

This movie ventures into the hearts and minds of abortion-minded women and abortionists. In so doing, “Unplanned” sincerely (if at times awkwardly) unwraps for us that gift which filmmaking provides the world: the ability to uncannily empathize with those who have pain we hope to never experience.