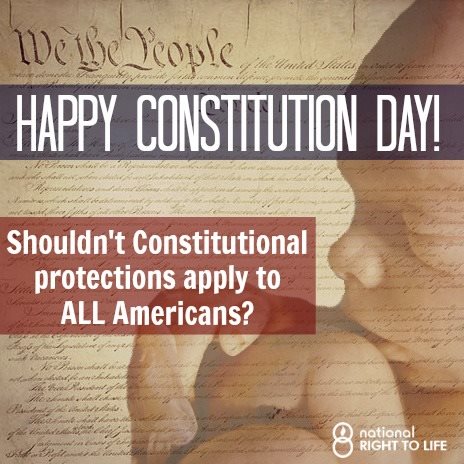 Happy Constitution Day! I don’t know about you, but I rather enjoyed seeing the posts on my Facebook news feed celebrating the signing of the Constitution on Tuesday, 226 years ago. I love the Constitution, and I love my country, but at the same time it is a shameful and sobering thought that the most vulnerable in our society, but also those who are the most innocent, and with the greatest potential, are not guaranteed the freedoms many of us may take for granted.

The photo from National Right to Life still celebrates the important achievement of September 17, while still questioning our country so that we may be able to do better.

Abortion advocates will often cling to how the Constitution supposedly guarantees us the right to have an abortion. The Fourteenth Amendment, which should be in place to protect unborn American citizens from the horrible death of abortion, instead was incorrectly interpreted to allow a mother to pay someone to kill her own child, as a matter of privacy.

Just last November, when Law Students for Life of America hosted an event titled “Should Roe Survive Another 40 Years?,” I was shocked to find out how horribly decided Roe v. Wade was, being a weak case decided mostly on a “penumbra”  of the Constitution. And what grave consequences this case has had, with 56 million Americans being killed before they ever had the chance to be born. I’m sorry to those who advocate for abortion as a firm Constitution right, but nowhere is abortion mentioned in the Constitution. The Founding Fathers, I am certain, did not see this so-called form of reproductive freedom as having utmost importance, and neither did their female counterparts, such as Abigail Adams.

Science has come a long way though, and we have a window into the womb. Pro-life support has also increased, particularly among the youth, who are not only enthusiastically pro-life, but aware that they have survived when they could have easily been aborted. I have hope that through time and small steps, by overcoming defeats as well as celebrating small victories, we will come to see the day when we have a Court which realizes pass errors made and seeks to right the wrongs committed by overturning Roe v. Wade once and for all.

Overturning what is arguably the most controversial and disastrous case in our nation’s history will not completely end abortion here in the United States, but it will certainly be a step. For those who advocate for abortion will no longer be able to hiide behind their faulty interpretation of the Constitution, a sacred document which should protect life rather than permit the ruthless taking of. I look forward to the first Constitution Day when Roe v. Wade is no more. That will truly be a September 17th worth celebrating!