A mom whose preborn child was given a life-limiting diagnosis spoke on TikTok about the experience, including her doctor’s insistence that she just have an abortion and try again.

Rachael Woolsey was studying to be an ultrasound technician when she found out she was pregnant with her first baby. Thrilled, she took full advantage of the ability to see her little one as much as possible. But at 12 weeks, they were given heartbreaking news. “I was excited for my husband to finally be able to see him – but we were completely blindsided,” she said, according to KidSpot.

Their baby, it turned out, had “many defects,” including amniotic band syndrome, where fibrous bands of the amniotic sac wrap around the child as he develops. Doctors didn’t believe he would survive long after birth. “Every doctor pushed me to abort and just try again,” Rachael said, but added that she refused. “My baby was such a fighter that I owed it to him to fight back.”

READ: Pressured to abort due to a prenatal diagnosis, they refused and their daughter was born healthy

Though she was firm in her decision to carry her child for as long as she could, it wasn’t easy. “I hated going into public. People would say: ‘how exciting, is this your first?’ or ‘sleep now cause once the baby is here you won’t get any,’ – they had no idea,” she said. And realizing all she was missing out on made it harder. 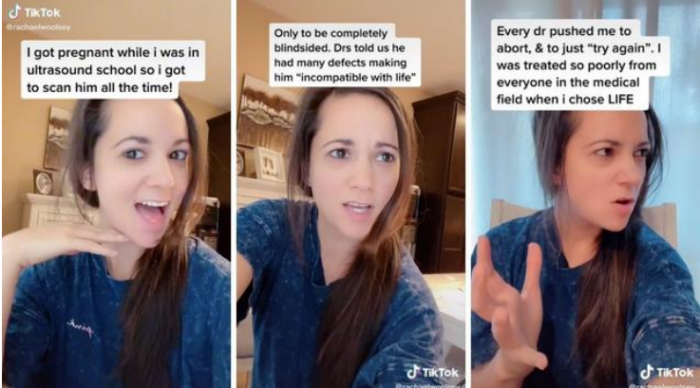 “While most mums got to pick a crib, I was picking a casket; while most mums picked a coming home outfit – I picked a suit for his funeral,” she said. “Mentally, we thought it would be easier to just buy things we needed if we were able to take him home rather than buy things we would never see get used.”

Rachael gave birth to her son, Zachary, and he lived for 18 hours after being born. And even though their time together was short, she doesn’t regret a second of it. “Even just a moment in our arms was better than never meeting him,” she said. In another video she said she wishes she could have one more moment with him again. “I just want to hold you one more time, to feel your skin on my skin. To see you look into your daddy’s eyes, to hear your little noises, to feel your soft skin… one more time.”