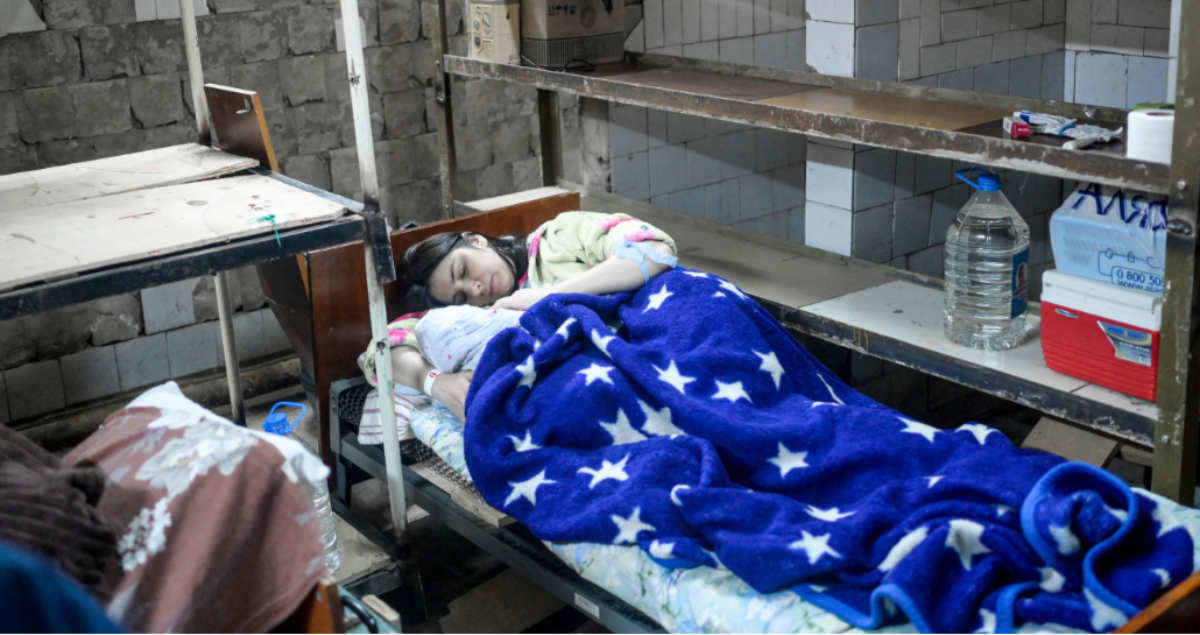 Fleeing with their children for their lives, mothers in Ukraine under wartime stress are facing extreme difficulties in the important task of breastfeeding.

Mariia Ismahulova, a 29-year-old English teacher, is one of these Ukrainian mothers. In an interview with Ms. Magazine, Ismahulova said that she and her children, Marat, 4, and Amina, 16 months, have been constantly in underground bunkers since Feb. 24, and she has been struggling to breastfeed Amina.

“I was under so much stress that I couldn’t eat. It felt like my breasts were always empty and [my] daughter was always crying.”

Ismahulova was interviewed while hiding in a closet with her children beside her on a mattress. She said she was with her children and her husband, Alex, in Kyiv when bombing began in the city. The family fled over 300 miles south to the city of Dnipro, but soon experienced bombardment there as well.

The uncertainty of waiting for the next air raid siren is tense. “No one knows what will happen the next minute. We wake up the kids and run. I hate these moments,” Ismahulova said.

Shockingly, some women and children have been caught directly in the line of fire. One young mother in Ukraine used her body, for example, to shield her six-week-old baby, and suffered injuries from shrapnel.

When postpartum women are under this type of intense stress and their bodies are producing the stress hormone, cortisol, the chemical composition and quality of their breast milk is altered, although they are still able to lactate.

According to a 2021 study published by Scientific Reports on the relation between stress and breast milk composition, increased cortisol causes higher fat and lower lactose levels in breast milk, which decreases the quality of the milk. Cortisol can also interfere with the oxytocin pathway that releases breast milk, leading mothers like Ismahulova to mistakenly believe that they are unable to lactate. According to the study, there is extensive evidence that child and adult health risks, including obesity, hypertension, and diabetes, are at least partly determined by early life nutritional status.

Mothers need safe and private places where they will be able to calm themselves and nurse. The unhygienic and unstable conditions of the war zone create an even greater need for breastfeeding. Infants have immature immune systems and are consequently vulnerable to infection. Ismahulova shared a text message from another mother desperate to save her one-year-old daughter from life-threatening illness. “She is ill for a week,” the text read. “Temperature is high all the time. Strong cough. Maybe somebody has some medicine, please! Antibiotics! The girl is dying!”

Besides providing the microbiota that keep infants healthy, breastfeeding carries less of a risk of infection than bottle-feeding in a dirty environment.

The UNICEF (United Nations Children’s Fund) Global Nutrition Cluster released a joint statement urging Ukrainian women to breastfeed and not accept donated infant formula as a substitution for breast milk. Donors have been sending large amounts of infant formula to Ukraine, but breastfeeding experts and organizations, including Baby Milk Action in the United Kingdom, recommend that donors send money instead.

Due to its nutritional value and role in strengthening infants’ immune systems, breastfeeding may very well be a large factor in Ukrainian babies’ survival.